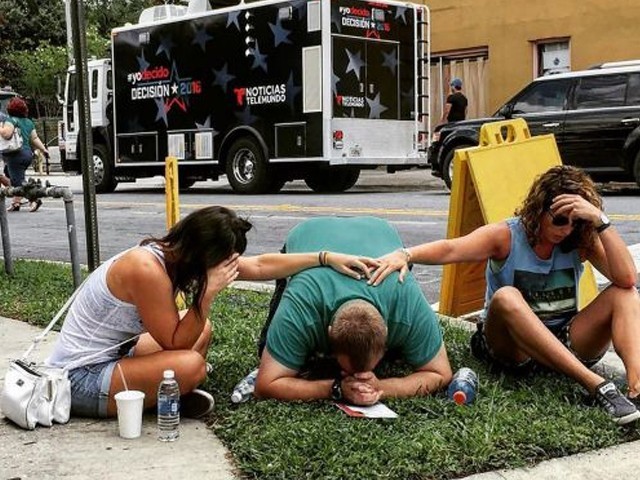 The news of the mass shooting at the gay club in Orlando, Florida early Sunday morning by the lone gunman identified as Omar Mateen leaves people aghast… yet again. The bloodshed has been deemed the worst mass shooting in US history and the deadliest terrorist attack in the country since 9/11.

Opening fire in the nightclub packed with over 300 people, Mateen killed 50 people and wounded 53 others. He held the rest hostage for three hours before the bar was stormed by the police and he, too, was shot and killed. The dust had barely settled after the San Bernardino shooting by the radicalised couple, Rizwan Farook and Tashfeen Malik, when another lone radical went on this bloody shooting spree. During the attack, Mateen called 911 to confess his allegiance to IS. Though the IS has not claimed responsibility for the attacks, the radical group’s supporters are lauding Mateen on the Internet.

Ever since the efforts to curtail terrorist activities have been toughened, the greatest challenge that Homeland Security has had to face over the years is combing out these ‘lone wolves’ from the population who are slowly being brainwashed by radical content. Indicating no deviant activity otherwise, they suddenly display ghastly quirks of behaviour that result in insane violence. Mateen too had been interviewed by the FBI and declared harmless in 2014.

In cases like Mateen’s, it is only gradually that a metamorphosis of ideas occurs. And for this, the most influential relay of information and regular source of ‘hate inoculation’ is whatever they glean from the Internet. This holds true for the vast majority of disturbed individuals who randomly pick up guns and go on mass shooting sprees or commit other acts of mindless violence. In today’s rapidly fluctuating global mind-sets where, both nationally and internationally, nerves are taut, political relationships are raw, and leaders are having trouble staying out of each other’s hair, the Internet is no help with its fostering violence such as this.

Let’s face it; just like the ‘bombed’ idea of the nuclear bomb, humanity has shot itself in the foot with the invention of an unmanned Internet, its good and bad unleashed upon minds of all kind to use as they will. With increasingly rampant and persistent use in every sector of every populace in every country, the Internet is doing more harm than good. No doubt, when it comes to radicalisation and spread of terrorism, this is most certainly the greatest bane of police authorities around the world.

Terrorists and terrorist organisations, whether they are operating in Pakistan or the US, are going extra miles in utilising the possibilities offered by the Internet to expand their perverted, aberrant ideologies. This includes the use of social media websites. Internet offers the luxury of anonymity and access to like-minded individuals with the click of a button.

Although inciting violence is their main purpose, these organisations also use the medium for communication; spreading information without being dependent on traditional print sources, raising and transferring funds from all corners of the globe, strengthening their information base regarding their targets and radicalising the mindsets of the lone wolves. The ‘sleeper cell’ pattern of terrorism that exists in Pakistan is also aided fully and activated through the use of Internet based services.

In the case of the Orlando shooting, the hostages inside the bar were using their phones to update those outside of the situation as it unfolded. Yes, it was good for them but no, it wasn’t good for other individuals like Mateen, who watch such updates keenly, and ‘wow’ the hype and prominence awarded to such tragedies on television and through social media. More often than not – in their sick and radicalised minds – they too feel the desire ‘to do something’ and be ejected into instant ‘stardom’ with a similar act.

To make it worse, they are hooked onto perverse websites that condone such acts and who subscribe to the twisted philosophies of organisations like IS. With the ease they have in obtaining guns, along with being thoroughly inculcated with warped theologies of terrorist organisations, they go on rampant acts of violence.

The US ranks number one in gun ownership per capita. Its hands are tied in taking any steps for reducing this number because of the Second Amendment. Then there is the Freedom of Information Act, which allows everyone access to all information. Hence the Internet flourishes. The connection between the Internet and the rise of terrorism has been extensively studied since 9/11.

It cannot be denied that the Internet is not the only reason why hate doctrines are flourishing so wildly at present time. But it also cannot be denied that it is one of the topmost reasons. What can be done about it? That is a million-dollar question. The human mind is currently so addicted to the Internet in one form or the other that it cannot bear separation from it even for an instant. It is a sad price we are paying for one of science’s stellar technological breakthroughs.

But whenever events like the Orlando shooting occur, one wonders how much higher a price will we have to pay for such stellar breakthroughs.