If the army has cleared the agency of all militants, then what is there to hide in South Waziristan? 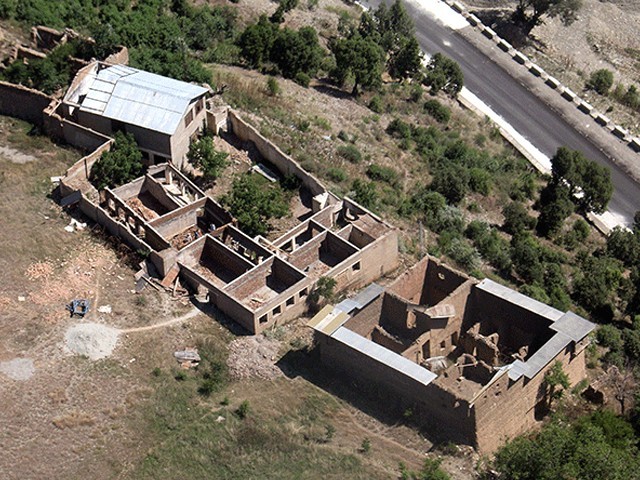 When we sees scenes like aerial photographs from South Waziristan which show houses stripped of their roofs, the first thought that strikes one is of collective despair that inhabitants of that god forsaken place must feel in their own country and in their own land. PHOTO: AFP

The Pakistan Army has been fighting valiantly against the scourge of terrorism. There can be no words that can fully express the debt of gratitude that one feels towards our soldiers for having done what they have done to protect the people of Pakistan from the nefarious designs of these “holy warriors.”

That being said, what comes next is an arduous task.

The frontier of Pakistan, the Federally Administered Tribal Areas (FATA) will continue to pose a challenge unless and until something is drastically done on a political and national level to integrate them fully into Pakistan. They must not be abandoned, nor should they be collectively punished simply because the Taliban used their homes and towns to launch their attacks on Pakistan and Afghanistan for so long.

Collective punishment is what the people of FATA have known for more than a 100 years. It is built into the very instrument by which first the British lorded over them and now Pakistan’s federal government rules them, that is the Frontier Crimes Regulation (FCR). This is a damnable law and the mentality behind it has sought to treat our own citizens as enemy combatants or collaborators.

This is why when we sees scenes like aerial photographs from South Waziristan which show houses stripped of their roofs, the first thought that strikes one is of collective despair that inhabitants of that god forsaken place must feel in their own country and in their own land. It is as if they have known no independence and no freedom and that they are a subjugated race ruled by a foreign power. How different really is our treatment of FATA from the days of Lord Curzon and other British rulers?

It is as if they have known no independence and no freedom and that they are a subjugated race ruled by a foreign power.
Photo: AFP

How different really is our treatment of FATA from the days of Lord Curzon and other British rulers?
Photo: AFP

The British bombed them in the 20th century and we are still bombing them in the 21st. The British deployed collective punishment as a tool and that is precisely what we are doing today. Looking at the pictures from South Waziristan, I do not see any difference, except maybe that we are even more ferocious than the British.

Imagine having your lives laid bare in this manner because of a conflict in which most, if not all, of these people were either innocent bystanders or at most unwilling collaborators. Imagine what must happen to these roofless houses, more reminiscent of ancient ruins than towns in the 21st century, during the monsoon season which is right around the corner.

There is no clarity on what the game plan is.

Is the government going to compensate these people and rebuild their houses or will they be left to fend for themselves? There is talk is of piddling compensation, some Rs400,000 per house. These families would need at least three times as much to rebuild their lives. Is there a plan in the works?

We need to know, and sadly, despite the fact that our Constitution makes right to information about matters of public importance a fundamental right, we are deliberately kept in the dark.

The media blackout in conflict zones is more counterproductive than useful. Right now all we (the citizens) have is the Inter Services Public Relations (ISPR) press release telling us of the situation in South Waziristan and FATA as a whole. Opening up these regions to independent media will only strengthen the credibility and establish the veracity of the narrative on this war.

And why must we be deprived of independent reporting in this conflict? Is it not through our tax rupees that these operations are funded? We are stakeholders in this conflict and we ought to know what is being done in our name so that there is transparency and independent verification of the facts. After all, the future of this country and our collective security is linked to it. There can be nothing that can be classified as being of greater public importance than honest and verifiable accounts of this war.

What is there to hide in South Waziristan anyway?

The Pakistan Army has reportedly cleared the agency of all militants. Why must we then stoke fires of suspicion? The good people at the ISPR and their think tanks ought to know that they have an image problem both domestically and internationally. Opening up the operations to scrutiny and independent reporting will be a step in the right direction and will only reinforce their efforts.

In this day and age, there is nothing like a complete black out. No amount of embedded journalism can substitute the real thing i.e. fearless and independent reporting by courageous journalists ready to risk their lives even in order to ensure that the public and the polity are kept abreast of the real situation on ground. All any attempt to control information through press releases and embedded journalists does is to allow certain sections to conjecture and come up with wild theories that may have nothing to do with the truth.

Often the wildest of conspiracy theories and the worst assumptions are taken by the populace at large as the truth.

Then there is the larger point. If we want to integrate these people into the mainstream of Pakistani society, our attitudes towards them need to undergo a paradigmatic shift. Indeed the battle against terrorism will be won when we win the hearts and minds of the people most affected by it. It will also need whistle-blowers in the media to stand up.

We must speak out consistently and without fear for the rights of our fellow citizens in the FATA areas. I long to see the day when FATA will be amalgamated into Khyber-Pakhtunkhwa and the century old subjugation of Pakhtun tribes would end. Till we extend to them all the rights and liberties of Pakistani citizenship, the very idea of Pakistan will remain incomplete. Only when a resident of FATA can finally claim that he too has the same rights and obligations as any other Pakistani, can Pakistan truly claim to be independent and free.