This Chicken Karhai is as good as the one from the Karachi-Hyderabad highway! 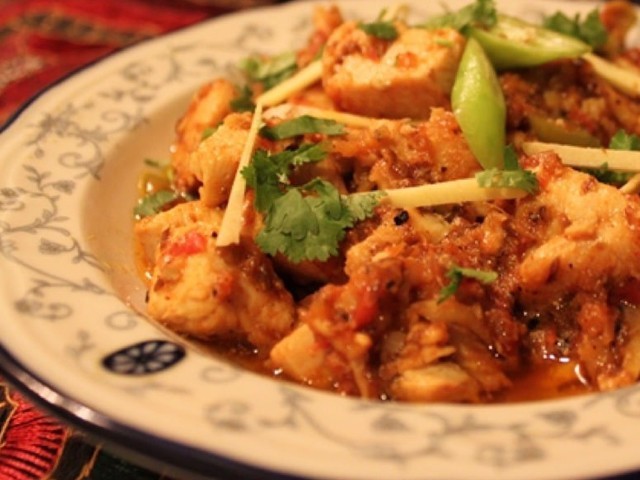 I have realised that a number of factors play a part in creating that particular taste. Using fresh instead of frozen and thawed chicken is the most important one. PHOTO: AMBREEN MALIK

The word Karhai means “wok”. This dish is traditionally cooked in a wok on a high flame and is hence called chicken karhai. My recipe for chicken karhai has evolved after I ate karhai at a dhaaba (roadside restaurant) on Karachi-Hyderabad M-9 Super Highway in Pakistan, many years ago. I can never forget its taste. What struck me the most about that particular chicken karhai was, the simplicity of the technique and minimum spices used to create such an unforgettable taste.

My reverse engineering of the recipe led to some success in creating a similar taste at home. I have realised that a number of factors play a part in creating that particular taste. Using fresh instead of frozen and thawed chicken is the most important one. Also, the choice of oil, butter and ghee (clarified butter) affects the flavour tremendously. Intensity of the flame also affects the taste of final product. I never imagined cooking chicken karhai could become such a technical process. So here we go:

Butter – same quantity as oil. (You can use all Butter or all Ghee- clarified butter) – Heat a pan (it should have a lid) and add oil and butter to it. Don’t let the butter burn.

– Add chicken and sauté it on medium to high heat so it changes colour.

– Add cumin seeds and ginger-garlic paste. Cook for about a minute. – Cover the pan and cook on medium heat till the moisture from tomatoes evaporates and chicken is tender. Mix from time to time.

– Now reduce the flame to the lowest and allow the oil/butter to come out from the sides of the chicken. This should take about five mins. Switch off the stove. Dish out in a serving bowl. Garnish with the remaining ginger, green chillies and coriander.

Serve hot with flat bread or buttered naan alongside salad and raita.

The author is a Microfinance Banker, food blogger, LSE Alum and a dragon in training. She tweets as @ambreen_malik (twitter.com/ambreen_malik)

Firni: A Pakistani rice-pudding that is a must have this Eid!

Tired and hangry? This easy and delicious Khageena is just for you!