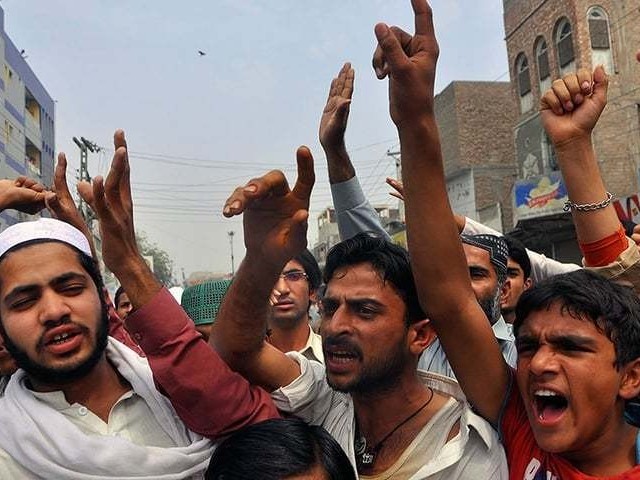 Providing mob participants with money, foodstuff, and protection from police, these syndicates are the latest manifestation of a justice system gone awry. PHOTO: REUTERS

“No room will be left for the extremism in any part of the country.”

Among its 20 points, NAP outlaws radical literature and funding, calls for restructuring in the FATA region and Balochistan to address regional grievances, and lifts the moratorium on the death sentence for convicted terrorists. But well over a year into its execution, NAP has been less effective and more counter-productive than meets the eye.

As one of numerous examples, consider the case of 81-year-old optician Abdul Shukoor. This past January, Shukoor, an Ahmadi Muslim, and his assistant Mazhar Sipra, a Shia Muslim, were sentenced to eight-year imprisonment under both the 1997 Anti-Terrorism Act and Pakistan’s anti-blasphemy law. Shukoor’s alleged “crime” was the possession of innocuous Ahmadi literature in his store, which provincial authorities spuriously claimed were “seditious and treasonous” and thus incited violence. Robert P George, Chairman of the US Commission on International Religious Freedom, condemned the action:

Professor George’s observation is reflective of a deeper issue that has wracked Pakistan for decades; the sway of popular opinion in Pakistan remains the primary decider of the rule of law or absence thereof.

When pan-Islamic demagogue Abul Ala Maudoodi triggered religiously-motivated riots in Lahore in 1953, Pakistan imposed martial law, and Maudoodi was issued the death sentence. But popular support ultimately forced the government to release Maudoodi. He would later sway public opinion to allow Prime Minister Zulfikar Ali Bhutto, himself a socialist, to introduce the third constitution in Pakistan’s short history and re-establish the “Islamic Republic of Pakistan”. The designation would contravene the aims and wishes of Pakistan’s founder Muhammad Ali Jinnah. Maudoodi would also become the single most powerful force in materialising General Ziaul Haq’s Islamisation of Pakistan and subsequent introduction of its infamous anti-blasphemy laws.

While Zia remains despised in his home country, Pakistan’s anti-blasphemy laws carry on his nefarious legacy. In 2014, a mob murdered a Christian couple after being falsely accused of ripping out pages of the Quran. That same year, a paranoid schizophrenic, sentenced to death for alleged blasphemy, was shot and injured by a policeman inside the prison. This past January, a teenager chopped off his own hand after mistakenly believing he had committed blasphemy. The cleric responsible for labelling the teenager a blasphemer was arrested but subsequently released following protest from other clerics; even the teenager’s father has supported the cleric. Judicial intervention in blasphemy cases is rare because witness testimony counts as sufficient evidence. And after a human rights lawyer who agreed to defend a professor accused of blasphemy was murdered, few are willing to challenge the laws.  Moreover, while Pakistan’s judiciary has never executed anyone for blasphemy, more than 50 individuals have been murdered before their trial was ever completed.

The NAP has ironically propelled, not quelled, the ugly tide. Indeed, the February hanging of Salman Taseer’s killer can be explained by the courts capitalising on the mass fear of extremists, not a meaningful shift in Pakistani jurisprudence. Consider that Aasia Bibi, the Christian woman falsely accused of blasphemy and whom Taseer publicly defended, has spent six years on death row, while her family has gone into hiding. Also, despite the Qadri’s execution, the Khatm-e-Nubuwwat Lawyers’ Forum, a network of 700 lawyers, provides free representation to ensure “death for anyone who commits blasphemy.”

Even Prime Minister Nawaz Sharif’s own son-in-law has supported Taseer’s killer by deeming the murder a “religious duty.” And while the court system dealt with Taseer’s murderer, no one has been held accountable for the subsequent assassination of Pakistan’s Federal Minister for Minorities Shahbaz Bhatti, a Roman Catholic and outspoken critic of Pakistan’s anti-blasphemy laws.

“One phone call and a hundred people will come… If they are from a religious minority, you just say they committed blasphemy or burned the Quran, and everyone will follow, no one will verify the truth of it.”

The same service can be used to stage political rallies, labour strikes and public lynching. Providing mob participants with money, foodstuff, and protection from police, these syndicates are the latest manifestation of a justice system gone awry. At the same time, the NAP has formed military courts to prosecute violent civilian criminals. But a parallel judiciary system that operates in secrecy and jeopardises the right to a fair trial only serves to delegitimise the current judiciary.

The repercussions of this reality are felt beyond Pakistan. For example, I have elsewhere explained the nexus between Pakistan’s legally imposed restrictions on religious expression and US national security. For example, the aforementioned Maudoodi would later influence the Muslim Brotherhood’s Hassan al-Banna and Sayyid Qutb (Qutb proving to have a deep impact on Osama bin Laden).

For NAP to fully realise its sweeping goal of completely rooting out extremism in Pakistan, legal edicts cannot be issued to appease hardliners one day and show tough mettle the next. Until the constitutional and criminal legal apparatus that emboldens extremists is fully dismantled, a culture of impunity will remain. Shifting the pendulum away from the whims of public opinion will require immense political will, but it can be done. Pakistan’s citizens largely practice various forms of Islam, many with syncretic belief systems, and are thus capable of appreciating the concept of a true republic and negation of mob rule. But if Pakistan’s governing elites keep permitting the pendulum of justice to wildly swing, the effects may prove devastating – not only for Pakistan, but the world.

The author is partner at Brown, Neri, Smith & Khan LLP in Los Angeles and adjunct professor at UCLA Law School. He is also a term member of the Council on Foreign Relations. He is a frequent lecturer on the intersection of law and minority rights in Muslim-majority countries. He tweets @waxeloquent twitter.com/waxeloquent