You forced me to break the law, Qaim Ali Shah! 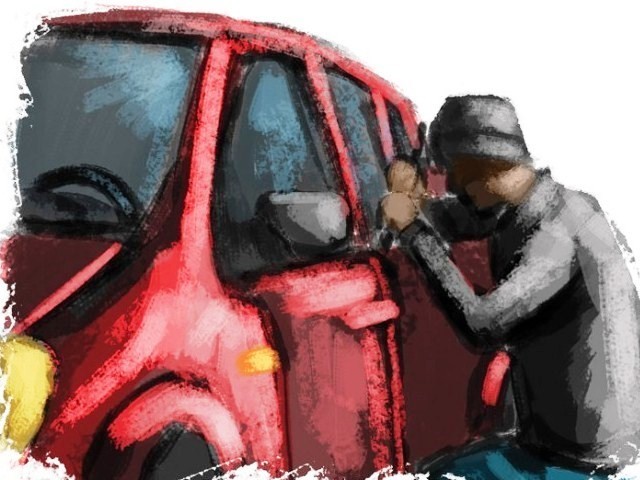 Over the past few years, citizens have watched helplessly as theft of automobiles and their spare parts is on the rise in the city. PHOTO: STOCK IMAGE

I’m not the kind of person who speeds through a red light, even if the drivers of vehicles behind me honk loudly enough to wake up the dead. I have a healthy respect for the law. So, when my son was deprived of his smart phone and 10 thousand rupees last month, I advised him to immediately report the crime to the police and the CPLC.

He smiled indulgently, saying that once you go to the cops they will never let you rest in peace and you’ll have to pay them a handsome amount to stop hounding you.

I don’t blame him.

The cops in Karachi are uncouth louts, most of whom cannot even speak Urdu, being political appointees from the rural areas of Sindh and Punjab.

God help you if you are with your wife and they stop you to search your car. They will take a long time doing it, all the time looking at your wife as if they’ve never seen a woman before.

So, when I parked my car this Sunday in Saddar (a locality in the heart of the city), the thought did cross my mind that a heroin addict might steal the side mirrors of my car (it had happened twice before, during the last three years). And that is exactly what happened.

When I returned after fifteen minutes, I found that one side mirror had been hacked off. I wonder why he didn’t take the other one. Perhaps he saw me coming and ran away.

The first thing I did was to look around for a cop.

Of course, none was there, all of them having been commandeered by the chief minister to protect his mansion from people who were protesting against the water shortage in Karachi.

For those who don’t know, as of 2014, Karachi has approximately 30,000 cops, 10,000 of whom are ‘ghost’ cops, another 10,000 are perpetually on leave, while the remaining 10,000 are assigned to those VVIPs who are ministers and members of the assembly. The result, of course, is a complete absence of law and order, with muggers and thieves free to loot the people who pay the taxes which are meant to be spent on their welfare.

I now had a choice:

1) Either I could ask the insurance company to replace the side mirror,

2) Buy one from a shop selling stolen goods.

The last time my side mirrors had been pilfered, the insurance company had asked me to pay half the amount, and it had taken three days to complete the formalities, during which time I had been compelled to rent a car.

This time, I decided to break the law: I bought the side mirror from a shop selling stolen goods in the Tariq Road area, paying only half of what I would have had to pay if the insurance company had arranged it.

And it took only half an hour, instead of three days.

So it wasn’t such a bad deal.

Of course, if Mr Qaim Ali Shah had done what he was elected to do, like assigning the police to catch those indulging in street crimes, instead of using the cops for his personal use, it would never have come to this pass.

Under the circumstances, can you blame me for breaking the law?