An orphan no more 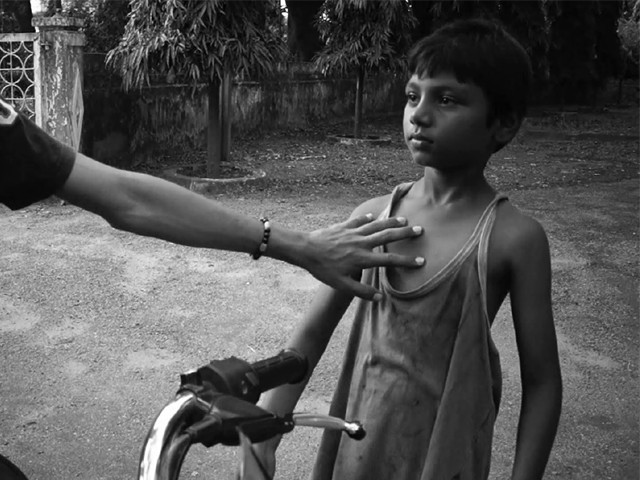 She gave me shelter. She gave me education. She gave me an identity. In her own words, she took me in her arms when even the streets would have rejected me. PHOTO: YOUTUBE

I remember I said to myself just as I opened the lid of the still-warm pot resting on top of the stove. The dirty dishes, filled with leftover pieces of roti, took their place on the right side of the stove and the empty water bottles on the other side had once again told me that my family had eaten without me.

The cooking pot seldom had anything left for me to eat. Usually, though, it was half-filled with diluted curry. Every evening, I was handed two gigantic, but empty bottles by my aunt, while she prepared the delicious-smelling food. It was my duty to take them to the water pump four-miles down the road, fill them up, and drag them back home. Every night when I returned with the bottles which, when stacked upon each other, stood as tall as my eight-year-old young frame, the watery remains of the once delicious salan (curry) taunted me.

Like every day, I once again thought to myself as I lay down to rest, that I would fall asleep with the thought of food in my head and no piece of food in my tummy. I clearly remember shifting in my worn-out bed, and the thoughts were quickly put to rest by the tiny splinters poking out of my bed’s frame, as they pierced through my skin and forced me to readjust my position and my thoughts yet again.

“Be thankful!” my aunt would always tell me, as a dirty smirk preposterously lit her face up whenever I asked her to change my bed.

“We took you in our arms when even the streets would have rejected you. Your parents left you home and they never came back to you. Even they did not want to see you! You’re an orphan! Do you understand that? Yateem ho tum!”

Orphan? Yateem? How can an eight-year-old know what these words meant? Was it a taunt? Was it a curse? Was it something that took my right to live away from me?

I grew up in a house of five children – Sherry, Polki, Nonu, Babu, and Babloo – along with my uncle who I rarely got to see and who was my deceased father’s only step brother, and my aunt who never considered me one of her own. I was the oldest one in the clan. My cousins loved me. They shared their books with me. That’s where I developed my love for reading and writing. They shared their meals with me when their mother wasn’t looking. That’s how I learnt that empathy knows no age. I loved the family; the children for their unconditional love towards me, my uncle and aunt for giving me shelter, food, and for sending me to school. If anything, I am thankful to them for ‘taking me in their arms when even the streets would have rejected me’.

However, for much of my early life right after my parents disappeared without any trace, up until my mid-teenage years, I was catered for by my aunt. Ammi, I used to call her just like the other five munchkins did. It’s funny how she lacked every feeling the word Ammi stood for.

Forgiving? Sympathetic? Not the least bit.

“I want to become a writer one day!” I used to tell her.

She used to laugh at my nonsensical comicality.

“And I want to become Princess Diana!” was her usual reply.

Or something along those lines. Nonsensical comicality.

I respected her for being patient with me. She never hit me like she hit her children when they misbehaved. The punishments I got usually revolved around me being sent to clean my uncle’s shoes. His shoe storage area was bigger than my room. It smelled of leather and mud. Pappa, I remember calling my uncle, never uttered a word to me. His smile and silence were the only interactions I had with him. Even while he watched me scrub away his shoes, there was nothing but silence.

Almost always, though, Ammi didn’t like the shine on Pappa’s shoes, so she stopped me from having the food that had been kept aside for me every night. My fingers used to ache, my young body shivered, my deprived stomach grumbled, and when I lay down to rest on those days, the splinters made it difficult for me to sleep again. This is how I found out that, like charity, abuse began at home too. Abuse though, does not necessarily have to be physical.

I began searching for work soon after my matriculation exams. My love for words took me to a newly-built office just at the corner of Ammi’s street. They were looking to hire a typist – someone who knew how to use a typewriter and knew how to play with words. I figured it would be good to finally be of some help to Pappa and Ammi. Every night before going home I would buy whatever fruit I could find nearby. Babloo, the youngest of the kids, loved Kinnu. Nonu loved mangos and Babu loved pomegranate. I made sure I got something for Sherry and Polki too. Cherries, they both liked.

Neither the job nor the money was great, but I had a purpose in life now. Even the leftover diluted curry tasted delicious every night when I got back from work. Ammi though, wanted me to leave her kids and her home.

“He brings us shame,”Ammi used to say to Pappa with disappointment etched across her face, when I scrubbed his shoes and wiped the sweat beads off my little forehead. Like always, I never understood her.

Nothing I tried made Ammi happy. I was working 18 hours a day, but that did not wipe away the disgust on her face when she saw me handing out fruits to my little clan. It broke me. Sickness and grief.

I remember reading somewhere that grief is like an ocean. Some days, the waves are so high and the sea so rough, you feel like you might drown in sorrow. Other times, the water is clear and calm and you can lay back in peace with the sun kissing your face.

Being an orphan, I figured that maybe I will be swimming in that ocean for the rest of my life. But it helped me to know that I won’t always feel like I’m drowning. I just needed to find peace.

I decided to move out when I turned 18. Albeit with a heavy heart, yet an almost empty soul. Nonu and Babloo cried the most as I packed my bag. Ammi and Pappa said goodbye and told me to come visit whenever I wanted to. As much as I wanted that to happen, I never felt like going back. I wondered if this is what my parents had dreamt of me to do when they had me after 16 years of marriage and possibly several years of heartbreak and unanswered prayers.

“Sixteen long years! You aren’t the reason your parents lived. You’re the reason they didn’t want to live!”

Ammi had told me on more than one occasion. What did they look like? Was I their only child? If not, where are my brothers and sisters? The memories of my childhood home were hazy. I did not remember how I ended up with Pappa and Ammi. I just remember the taste of the diluted curry and the smell of leather and mud.

The thought of moving to an orphanage crossed my mind once. However, I decided against it. I wanted to become independent. Moving out gave me the liberty to be my own person. I learned that I could be fearless, I could be angry, and I could fight. These were three things that I never knew I could do before.

My life moved forward. Fast forward 20 years, my hard work has taken me from being a typewriter to becoming an editor to running my own newspaper. My work introduced me to the love of my life – Beena – who like myself, felt at home with pens and words, and who understood the pain I went through in my early years. She and I are parents to a beautiful daughter, who reminds me so much of Nonu.

Becoming a father has opened my ears and eyes to the world of a parent. Millions of years of evolution have conditioned humans to respond to the cries of a child. We can’t bear to see a child in pain, especially if it’s our own. I know that now more than ever. We all handle these times differently, but everyone cries at some point. Sometimes the tears represent sadness, while some other times they represent the greatest feeling of joy known to man. How then did Ammi let me sleep on that bed when she knew how painful it was?

I believe life moves around in circles. A few years ago, Sherry and Polki dropped by my office and talked me into keeping Ammi with me for a few weeks, while they and their wives ventured about to the Americas for business purposes. I did not hesitate for a second in agreeing to that. I had not seen Ammi for 10 odd years – the last time I did was at Pappa’s funeral – something that bothered me every night. I was ecstatic to finally go see her at the same home where I grew up.

She was in the same room. It smelled of leather and mud.

“The smell of my childhood”, I thought to myself.

She lay on the same bed that she so nonchalantly used to sleep on. Tiny wood splinters poked her old skin, but she could not move. Her eyes fixed on the roof.

“Alzheimer’s,” Polki said, just as I was about to kiss her forehead.

“She’s drifting towards a slow, painful death, and it’s very difficult for us to take care of her”.

“She will stay with me from now on. She is my responsibility.” I told Polki, as I barely contained my emotions.

‘You’re an orphan! Do you understand that? Yateem ho tum!’ Her words rang loud and hard in my ears again.

“An orphan no more”, I told myself.

I want to repay her debt. What debt?

She gave me shelter. She gave me education. She gave me an identity. In her own words, she took me in her arms when even the streets would have rejected me.