If that was my kid, I’d want Harambe killed too 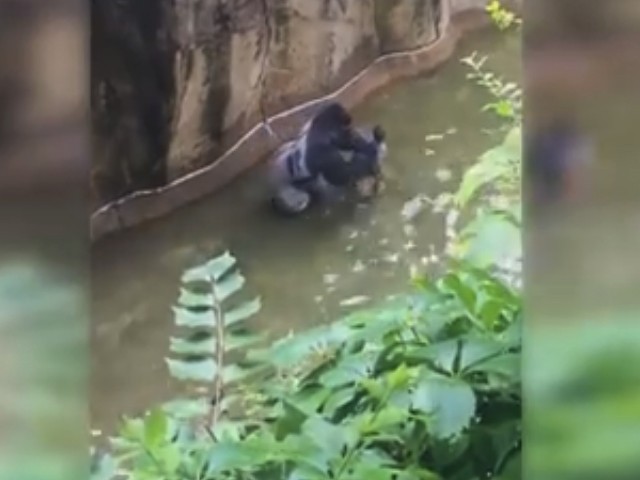 After falling into the gorilla enclosure, a four-year-old boy was dragged through the water by a silverback gorilla. Though the gorilla appeared to be attempting to shelter the boy, eventually authorities had to kill him. PH0TO: SCREENSHOT (YOUTUBE)

Over the past few days, the incident of a four-year-old boy (who had somehow ended up in a gorilla’s pit at the Cincinnatti Zoo, and where one of the gorillas was shot dead in order to keep the boy safe) has turbulently taken the internet by storm.

Countless tweets, Facebook posts, blogs, and articles have been written about the incident; some justifying the killing of the gorilla for the boy’s safety, while others expressing immense outrage, stating that the boy’s mother, Michelle Gregg, was “negligent” and that the gorilla, the beautiful and endangered Harambe, should not have been killed.

Curious, I decided to watch the video that had gone viral over the web to see what all the fuss was about.

To say that I was horrified is an understatement. I kept wondering: what if that was my kid, sitting there in the shallow water beside that monstrous 400+ pound gorilla? What if it was my child in that enclosure – so close, so VERY close, to death? As any mother, I, too, would have wanted that gorilla killed so that no harm would come to my child. There is no doubt in my mind about that.

However, I do not want to come across as inhumane or insensitive towards the seemingly innocent animal that had to be killed in the unfortunate process. As an avid animal-lover, it pains me to see animals held in captivity, tortured, and killed (either for sport or leisure). At the same time, if I had to choose between an endangered animal and a human child, I would pick the life and safety of the child.

Why? Because I, too, have children of my own. And I love them to the core of my being; I would do anything in my power to make sure no harm ever comes to them. A mother’s love for her children surpasses pretty much everything in existence; she would even go as far as to kill to ensure the safety of her offspring.

At least I would.

Yet, despite the uproar over Harambe’s killing, what particularly disturbed me most (and hence compelled me to write this blog post) was peoples’ reaction and attitude towards the little boy’s mother. It appears that she has been receiving the brunt of the vitriol, where people are accusing her of being a “bad mother/parent” and for being “negligent.” In fact it has gotten so bad that the poor woman is actually receiving death threats and these so-called animal rights activists are demanding that her son be handed over to child protection services as she is an “unfit mother”.

The irony is that Gregg is receiving death threats from the same people who claim to value life, except in this case, they seem to care more about the life of an animal than a human being. It’s sad and deeply unsettling that there exist people in the world who would rather see the child die instead of an animal. I’ve even come across despicable memes, such as the ones below, that has made me question humanity and how people are so incredibly quick to judge and place blame:

To the woman who let her son get a beautiful gorilla killed,

Don't thank God that your son is still alive. Fuck you.

Yes, people, mistakes happen, and even the best of us can make them. Gregg made a ‘mistake’ but she was not a negligent parent. Not necessarily, anyway. Perhaps, briefly distracted? But definitely not full-out negligent. I’ve had friends tell me that she shouldn’t have handled and taken all four of her kids to the zoo and should have ensured that there was more than one adult present.

However, I personally would not judge this woman simply based on that one horrific incident. She worked as a day care provider, so that means she’s used to handling several children at once. She probably assumed it would be okay to take four kids to the zoo together and be able to handle them all by herself. The boy might have slipped away in a split second. And zoos are known to be huge! The mother probably lost him the second she noticed he was gone, and by the time she found him he may have already made his way into the gorilla’s den.

It’s a difficult to comprehend all of this because we weren’t there to witness it all. I just know that dealing with a toddler is no picnic. Those of us with toddlers know how much of a handful these little rascals can be. Fellow mothers very well know the struggle of a hyperactive toddler, who just for the love of science and sushi, won’t sit still.

Parents of toddlers know, and they know this very well, that if our kids were in the Olympics, they’d beat out the competition with every single adult that is competing. They are extremely fast (lightning bolts have got nothing on them) and full of so much energy (Energiser bunny, take a seat) that it’s exhausting enough just watching them.

As the mother of a two-year-old, I hesitate each time my family plans outings to the park, beach, or, yes, the zoo. I hesitate because I know the struggle is very real — the struggle of having to constantly keep a watchful eye on my Energiser-bunny toddler so that she doesn’t end up disappearing or seriously hurting herself. Even going to the mall is a struggle. How many times have we gone to the mall to shop with a toddler, to instead end up running around in circles after them so that they wouldn’t get lost in the crowd? It’s impossible to go anywhere with them, unless, of course, you put them on a leash. I used to be against the idea of a leash before I became a mother. I thought the idea was horrific and belittling. But now, I’d leash up my little girl if it ensured that she’d constantly be by my side, and most importantly, safe!

We need to stop judging Gregg for being a “bad mother” and saying things like,

“She should have kept a better eye on her son.”

Stop blaming Harambe’s death on Gregg’s so-called negligence. Stop dictating what a good and perfect mother acts like; better yet, don’t dictate at all. Perhaps you are lucky that you’ve never seen your toddler in serious danger yet, but you can’t make assumptions about a person without knowing how or what they’re actually like. That is arrogant. You don’t know her, so you have absolutely no right to judge her. This horrific incident is by no means an indication of her parenting skills, and we seriously just need to leave the poor woman alone! She’s already been through hell and back; the last thing she needs is a bunch of judgmental people bashing her and blaming her for something that, like she said, was a mistake.

My strong reaction is warranted by how unfair it is to judge this woman on one incident. I personally know so many people whose babies have accidentally fallen off of beds, or rolled over sofas and fallen to the floor; should we call those parents negligent too? It’s hard to say. I know I can’t compare a baby falling off of the bed to a baby falling into a gorilla’s den; but the premise is the same. Both times, the parents weren’t there to save or protect them.

On a final note, while I agree that Harambe’s death was painful to bear, it would have been even more heartbreakingly painful had that child died instead. We can argue all we want and assume things like,

“Oh, but the gorilla seemed like he was ‘protecting’ the boy,” or

“The gorilla is known to be a ‘gentle giant’ and was not going to hurt the child.”

The fact of the matter is that, at the end of the day, Harambe was an animal, regardless of how calm/gentle he was or appeared to be. And it was only a matter of time until he seriously hurt, and perhaps even killed the child. There wasn’t much time for vacant assumptions. Quick action needed to be taken, before a tragedy was to happen. Killing Harambe wasn’t intentional, but it was necessary. It was a necessary evil; an extremely unfortunate event. But, as a mother, I totally get it.

If that were my child, I would have taken the pistol from the zookeeper and shot the animal myself.

May Harambe rest in peace, and may Gregg and her sweet son find the peace and solace they deserve.

PS: We also really need to get rid of the idea of zoos all together. We shouldn’t put animals in captivity like this anymore. I’d love to see a petition to end zoos for good. Anyone interested in creating one? Please contact me at [email protected] Thanks in advance!