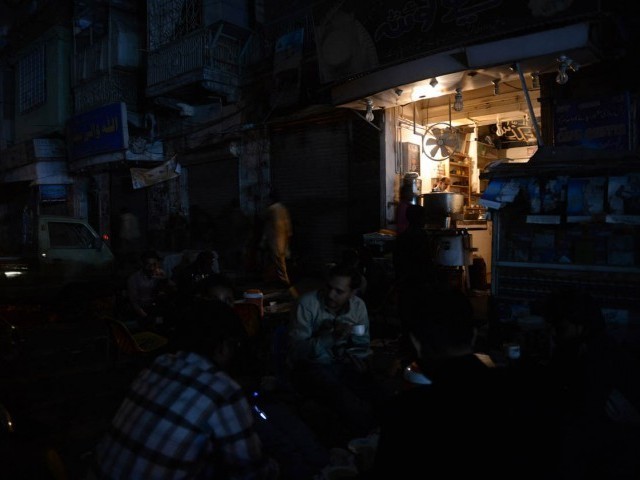 In past, 18-20 hour load-shedding was being observed in the country, however, in just one year, the government curtailed it to 12 hours. PHOTO: AFP

This is to ensure that when they enter their cabins, the temperature is not more than 20 degrees centigrade. These government officials, ministers included, want to remain cool so they are comfortable even when the temperature outside is 45 to 50 degrees.

One doesn’t mind our bureaucrats and ministers enjoying themselves in their ultra-cool offices. But what they forget is that the electricity they use (and waste) has to be paid for.

Unfortunately, they regularly default on payment, and therefore the power producing companies are always short of funds and cannot buy the fuel to produce electricity.

The result of course is load shedding.

It’s not that we don’t have the capacity to produce enough electricity. Our power companies can generate 22,000 megawatts against the required consumption of 17,000 megawatts. But owing to the government defaulting on paying its bills, they are forced to cut back on production and we have long power outages.

It is against all logic for the government to spend precious resources on building more power plants when we already have adequate capacity. To reduce load shedding significantly, all that the government has to do is to pay what it owes to the electricity producers.

This amount (known as the circular debt) is presently about Rs400 billion.

If the power producers are paid what the government owes them, they will increase production and massive load shedding will be a thing of the past.

As expected, we are told that there will be load shedding in the holy month of Ramazan, and the common man will suffer because of the government’s inefficiency and negligence. So, while our civil servants and ministers will spend the month of fasting in the comfort of their offices and houses, we (the taxpayers) will have to endure six to eight hours without electricity every day.

Last year, many people died in the unbearable heat, and the major reason was load shedding.

Why doesn’t the government monitor the excessive waste of electricity in its departments?

Why not make government employees pay for the electricity they consume in their offices?

Why should we suffer because of the negligence and inefficiency of our “baboos”?