His shoes disgusted me 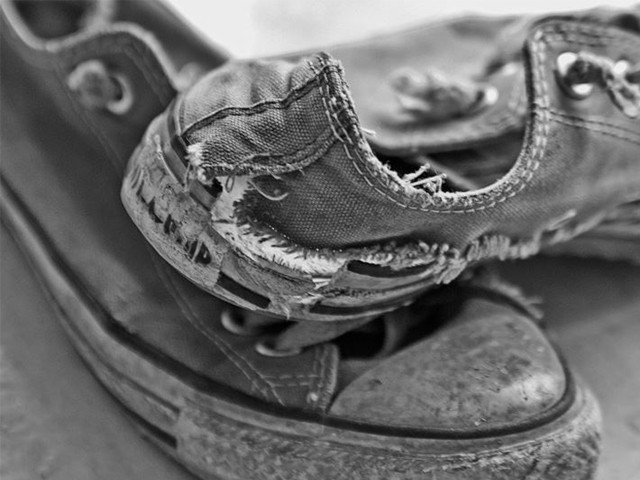 Actually, I had never seen shoes as essential to a person’s existence until now. PHOTO: DP COMPETITION

I was in the bus sitting next to him, trying hard to look away. I had never seen them so close – so broken before. Generally, the stitches were patterned, the shine was bright, and even when it was dull; they made the person complete, secure.

But here, a small piece from the side was missing. There were threads that were coming out from the opposite side. I could see his brown sock and his foot was visible from a hole in it. And that sight – that incredibly normal sight of someone’s foot, but in a public setting, with a thousand eyes and a million judgements, made me cringe. For myself or for him, I don’t know.

Actually, I had never seen shoes as essential to a person’s existence until now. And then I began to notice each shoe that sat across me. They were those with a pointed head, those that look subdued, those that called attention to themselves, and those that had their head held high. But no shoe did I see which was like his. Or which revealed what was inside, which displayed how incomplete a man was. How poverty was on full display in the most public space. And the hardest thing was that the man refused to acknowledge this fact.

He looked ahead with a look that made me feel incomplete. Who was he? How could he forget what he wore and what it implied? What about the words, looks, judgements, frowns and sighs that were showered upon him by relatives, strangers and bystanders? Did they pass over him like water over an old, friendly stone? And where was he looking? What was he seeking? Was he capable of seeking anything, knowing where he stood?

I was envious of the man’s demeanor and repelled by his attire. The feelings that I felt were so opposed to each other that I felt my insides stretching, as each feeling pulled the other in its direction. There were questions inside my mind that waited at the edge of my tongue, and for a moment I had no clue what I would say next, but only that the first question was about to drop out at any time now,

He looked at me and it surprised me because it had none of the hostility that I was expecting. Rather it was a smile, a new one, or perhaps just one that was forgotten and it had just resurfaced?

“12,” and I looked again at his shoes, unable to take my eyes away.

“What do you want to know?” he inquired, and he asked in a way that made me feel as though he would answer any question at this moment.

“Why do you wear these shoes?” I asked again.

He laughed and said,

“I could ask you the same question.”

I looked at my own and my heart relaxed,

“I wear them because they are properly knitted, polished, and go well with my clothes and, most importantly, they protect my feet.”

“Would you never want to wear what I am wearing?”

“To everyone. I would never be able to go outside wearing them. Everyone would look at me.”

“But would the shoes protect your feet?”

“I guess so, but I would feel incomplete.”

The man looked at me to see whether he was still talking to a 12-year-old or perhaps he knew me from before and recognised me right now.

“And what is this feeling of being complete?”

I was surprised why he didn’t ask about incomplete, and so I wondered. I always used the word ‘complete’ in my daily life: in school, at home, with friends, family and with my teachers. Everyone seemed to understand what it implied, but I had never asked anyone what it meant and no one had ever bothered to share. And I felt deceived by the word. How it had been used without ever letting me inside of it. And I shook my head,

He looked at me and I felt the same deception I had undergone a moment earlier, as he smiled again and a strange warmth emanated from it – as if he could see himself in me. For a moment, he didn’t say anything and the weight of the silence began to rest somehow on my shoulders and just to lift this unbearably, strange weight with a sentence, I said,

“You haven’t answered my question.”

“I wear these shoes because they do what they are supposed to do. I cannot find a better use of them other than protecting my feet.”

“But why would you not clean them? Stitch them? Or get new ones? Or polish them?”

“I want to do each one of those things. But not to my shoes, but for this one thing which is here,” he pointed to his heart and, as he pointed, my own heart raced as if it had been cornered somehow.

“Why is this important?”

I asked, pointing generally at my chest because I wasn’t sure where my heart currently was.

“Because only you feel it. Not a soul in the world has seen it and not a single person believes in its existence as much as you do. And because it’s only wrapped around you, you are the one who is accountable for it. Because it can be both: your greatest friend and greatest enemy, depending upon how you treat it.”

“You make it sound like it has its own existence.”

“I don’t know, that’s for you to find out. All I know is that its condition is far worse than my shoe. It’s broken here and there and there and here. I have stitched it so many times that I often end up stitching the past stitches. And behind each stitch, the people that reside, there are so many memories stored that they ooze through the stitches and though I am the only one who witnesses their resurfacing, I cannot let them stray far from the heart so I stitch them again at a different place in the heart. But sometimes my mistakes from the past rise up with the memories, and that’s the hardest part. Coming face to face with what you had buried, and when something comes out again, it often becomes a force of its own, seeking strength from surroundings that you could never imagine. But not all is dark inside the heart.”