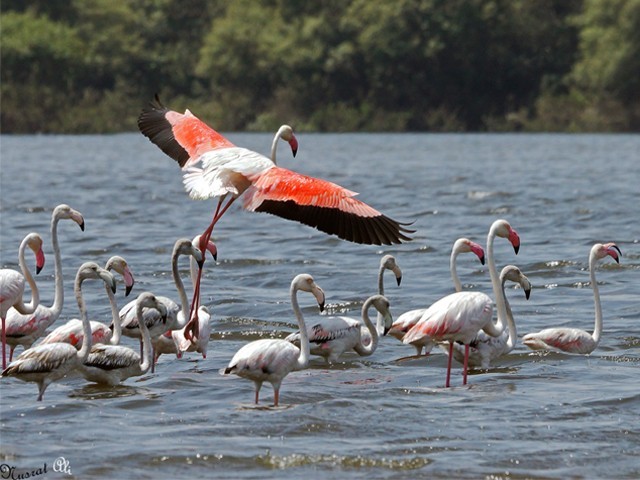 I, seemingly, found a solitary male bird flashing its pristine plumage but certainly the bird also found me and flew to join its flock. PHOTO: NUSRAT ALI

“I think there are flamingos in Karachi, and I’m going to find them.”

When I got this call from Mirza Naim Beg at around nine o’clock on Friday night, I thought this was the best way a retired man could start his weekend. No, I have not retired as yet. Beg sahib is a retired banker and was also a fashion photographer for some renowned magazines from yesteryears. He has discovered a new-found love for beauty, only this time he shot real birds with feathers and beaks.

Naturally my response to him was to go ahead, only if he knew where to find them. He had an interesting answer. He told me he saw a flock of flamingos at sea view last week, going eastwards and that he had a pretty strong idea as to where they were going. So, true to a bird-photographer in the making, I said yes and the plan was set for the coming morning.

We reached the point which Beg thought was the resting place for the flamingos and it came as no surprise when we spotted none (I was already expecting that). The place was empty, with no birds in sight. Only the sound of the sunbirds could be heard.

Since we were somewhat prepared for this outcome, we weren’t too disappointed. We started our journey further down the road, when suddenly I caught a glimpse of something white in the middle of the water body running alongside us. We looked through the zoom lenses of our cameras and couldn’t believe that a flock of over 100 flamingos was right there in front of us. We left the comfort of the car and started tiptoeing towards them at a painfully slow pace under the scorching sun. The problem was that these birds were so smart that they particularly chose a place where they couldn’t be easily sighted or exposed to any imminent danger. The only cover that we could use was to be unobtrusive — if you call that a cover at all! See the bushes at the right of the frame?

I thought I could camouflage myself behind one of those if I could reach them without startling the birds. However, a black-winged stilt acted as a whistle-blower and knocked our cover off with a frantic emergency call. The poor bird may have had a nest somewhere near by and recognised us as predators. To our dismay, the flamingos that had been busy feeding (with their long necks ducked down in the water) were alerted. These were ‘greater flamingos’ with their bright pink beaks and feathers. There were also many ‘juvenile flamingos’ in the flock too. One of the greatest joys of having found these birds was that this was a sign that these birds were successfully breeding and growing in numbers in Pakistan. I was able to catch a solitary male bird, flashing its pristine plumage, but the bird also found me and flew away to join its flock. It seemed to have rung an alarm bell because a few seconds after the male flew away, we noticed the entire flock become alert then suddenly all of them flew away. They taxied first and then took off in the air with full throttle. It was a beautiful sight until we realised that they were actually gone.

Beg sahib, who was standing on my left, pointed towards my right to a spot hidden by a big boundary wall of an empty plot. When I peeked over the corner, I was delighted. There was another flock of mostly juvenile birds resting. They were a little closer than the bigger flock, so we took a few photographs from close range. Obviously this was a bad call.

We were probably too close for their comfort and they took off as well. Although we had had enough to satiate our enthusiasm and memory cards, there is a little itch you find in every photographer you ever meet. It’s called the “just one more shot” itch; and it exists even in amateur photographers like me.

So, in order to scratch that itch and satiate our “photographer’s appetite”, we headed in the direction the flamingos flew off to and as luck would have it, we found them close by. This time the terrain seemed to have taken mercy on us and allowed us enough cover to zigzag our way closer to the flock without stressing them out. And that was when I was finally able to scratch that formidable itch – and I got my ‘just one more shot.’

(The name of the place is not mentioned deliberately for the safety and well-being of the birds).

The author is working as Associate Director Sales for Express News. He has done his MA International Relations from Karachi University and MBA Marketing from IBA. Bird photography is his area of interest and he has been doing it since 2014. He tweets as @Nusratali74 (twitter.com/Nusratali74)