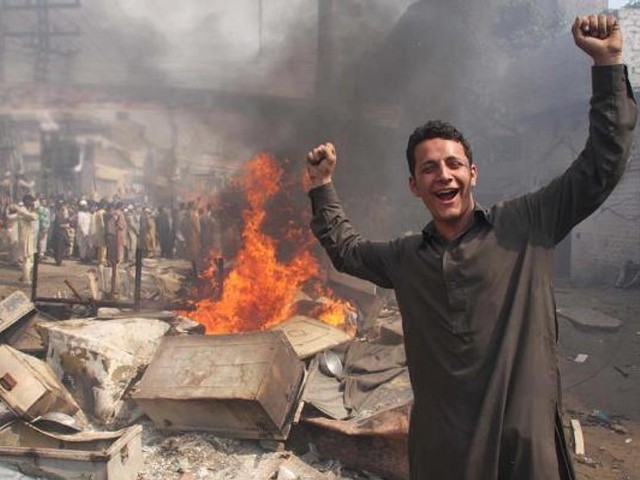 On March 9, a mob of over 3,000 people set ablaze more than 150 houses of Christians in the Joseph Colony over alleged blasphemous remarks against Prophet Muhammad (pbuh) by Sawan Masih, a 28-year-old Christian sanitation worker. PHOTO: ABID NAWAZ

Does anyone remember this image? It’s not that old. But I suppose it has been forgotten.

Let me remind you. This image is less than three-years-old. This is March 2013, Lahore. Triumphant and probably feeling much closer to God, this man stands before a burning heap of what was once a Christian colony.

In November, three years before that, a Christian woman named Asia Bibi was charged with accusations of blasphemy and she sits in jail to this date.

In March 2015, two churches were attacked in Lahore and 14 people were killed.

The same year, just a month or two later, a Christian couple, Shama and Shehzad were killed mercilessly.

These dates, these minorities, these methods of persecution mean something. They mean that there is a significant problem in the Muslim community and that problem is called intolerance.

And it isn’t just Pakistan, where Muslim majorities have decided that they would take out their anger and frustration with the world on the weak and outnumbered. A Muslim mob in Egypt stripped naked a 70-year-old woman after rumours that her son had an affair with a Muslim woman.

It’s as if all this fighting amongst themselves is not enough to quench their thirst for violence and chaos. All the ‘rebellion’ and ‘protest’ that seems to have gathered enough media hype was not enough to make them realise the value of peace – they had to go out and target the minorities as well.

What is it about self-righteous mobs that make them forget a sense of self? What is it about the kind of ideologies that are preached by hate-mongers in the pulpits that makes everyone grab their pitchforks to kill everyone who dares disagree with them?

What is it with majority groups that somehow end up bullying the minority groups? War or peace, when human beings become majority stakeholders of any space, they want to take over it, they don’t want anyone else to share the power with them. And one of the many ways they try to bully the weak into submission is to lynch them. These groups can use anything: religion, finances, ethnicity – anything. Anything that is the defining characteristic of the majority is a tool and a reason for them to attack and make the weak capitulate.

Muslims are victims of Islamophobia in the very same way. There are powerful groups that categorise every Muslim as a terrorist or a threat. This is why those in power attempt to send messages of tolerance (Obama’s speech to an Islamic gathering in Baltimore, Pope Francis’ speech about how Christians and Muslims are brothers and sisters) – in order to create an impact within the masses.

Post December 2014’s attack on Pakistani children, the parliamentarians and the ruling establishment came up with the National Action Plan in which no hate speech or no hateful act against minorities would be tolerated. However, we see day in and day out that there is hate speech against Christians, Shias, Ahmadis and anyone else who doesn’t subscribe to the mainstream Pakistani religious denominations. People are labelled as ‘kafirs’ and ‘yahudi’ agents and simply killed for having a difference of opinion. Be it Rashid Rehman, Parveen Rehman, Shahbaz Bhatti, Salman Taseer, Sabeen Mahmud, Khurram Zaki or any of these voices that wanted to stand against discrimination were silenced brutally – it’s just how the way Pakistani society works. There is intolerance amongst the chief heads of parties, there is ample misogyny in their attitudes and there is plentiful ignorance shown by seemingly educated and powerful elite of Pakistan.

From the small speeches aired from the Friday prayers that ask for death to Jews and Shias and Ahmadis and basically everyone who isn’t them – to the bigoted thoughts we have against those whose beliefs do not fall exactly in line with ours.