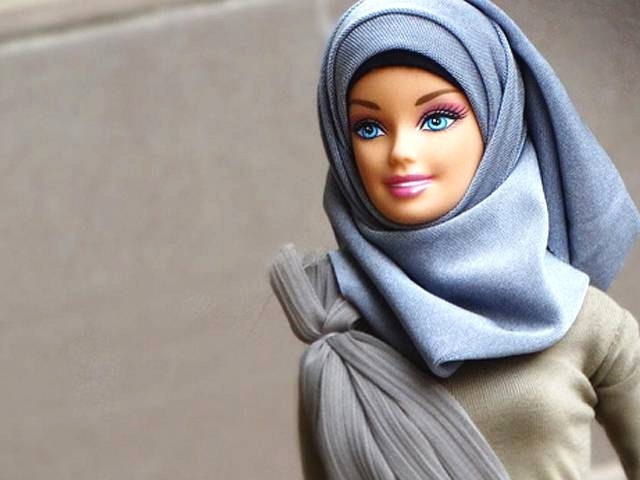 The 'Hijarbie', created by 24-year-old Haneefah Adam, will be initially available in the US and will be sold in the UK from mid March. PHOTO: THE ECONOMIC TIMES

Let’s open a can of worms (an interesting exercise if indulged in occasionally) and wonder what it would be like if Barbie (of Ken fame) came to Pakistan as a franchise.

Since a non-Muslim woman before being co-opted into a Muslim family must become Muslim and change her name, Barbie, before being launched in Pakistan must do the same. I speak of Pakistan which rejoices in the name ‘The Islamic Republic of Pakistan’ as of a family, however dysfunctional, and of Barbie as a sort of Qaum ki bahoo, (the nation’s daughter-in-law) which puts Sania Mirza’s nose out of joint.

Barbie, on the other hand, comes backed with Mattel which is owned by Ruth Handler, a Jewish lady, and although they’d keep that quiet if Barbie came to Pakistan as a franchise, Barbie would be renamed Bubblee to preserve Pakistani sensibilities.

Bubblee in Pakistan would look like, well let’s just say she would look as though she’d been poured into her clothes and forgotten to say “when”. Okay, that was lifted straight from PG Wodehouse but I couldn’t have described it better because she’d need a touch of Aruj TV and impossibly blonde hair to make it in this place.

In Pakistan then, the Bubblee doll would come complete with an extensive wardrobe, and the following accessories.

1. A chaste white hijab for prayers.

The original design included little silver discs sewn into the edging which clashed together and made a noise that tuned out unmelodious azans (call for prayer), but it was still rejected. The accepted design would include tiny silver minarets with large pink loudspeakers stamped all across the edge.

2. A shiny pink vanity case complete with purple lipstick for parties, a pale nude for prayers, and a bright pink for all other times.

There would be besides several bottles of nail polish, required since water does not permeate polish and renders prayers invalid so the polish needs to be changed five times a day. There’d also be a bottle of attar, not scent since Estee Lauder was Jewish too and therefore, haram. Really they do crop up. Oh and there’d also be a tube of fairness cream.

3. A cell phone, since no self-respecting person these days is seen without a cell phone and Bublee, is a respectable doll.

Bubblee can be bought with a Ken, or to give him his Pakistani name, Kashif. Ken would not normally have been renamed because not being a woman he may keep his identity, but because Muslim women may not marry non-Muslim men, and Bubblee and Kashif if unmarried would come under the blasphemy line which is a competitor, the whole thing would be classified as, yes, you got it, haram.

So Ken is Kashif here, a name made up of two words: ‘Kaash’ and ‘If’, a good choice when someone has to marry a Bubblee.

Kashif comes with his own extensive wardrobe with the following accessories:

In packs that contain both Bubblee and Kashif this is a mandatory accessory. The document comes preserved in food grade plastic in case Kaash-if ever needs to eat his words.

When the need arises this is to be used to beat Bubblee lightly. It comes signed by the Council of Islamic Ideology (CII) and sealed with the CII stamp, a telescope circled by a moon and hatchet.

There was some debate once again, this time about how this last item could be reconciled with the fact that Pakistan is a signatory to the Convention on the Elimination of All Forms of Discrimination against Women, and someone suggested that a broom should also be included amongst Bubblee’s accessories to eliminate the discrimination against women. But that person has since gone into hiding and has been declared…haram, yes, because he does not possess a CII stamp but the CII would love to stamp on him.