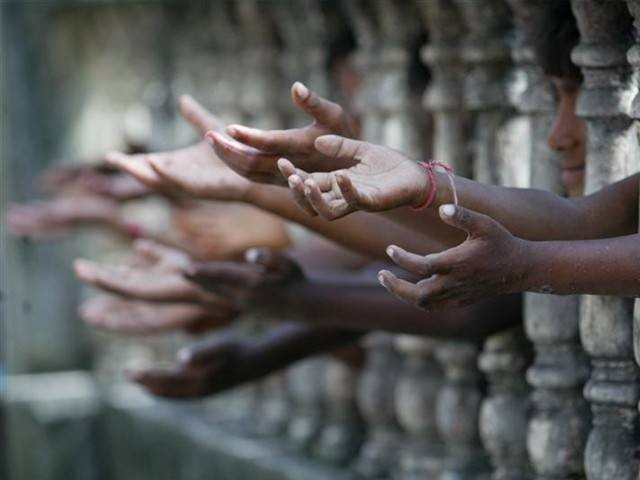 A capitalist system is rigged in the favour of the rich and the lives of people keep become harder and harder as you go down the economic ladder. PHOTO: REUTERS

A while back, a story went viral on the internet about a young girl, who worked as a house maid. Long story cut short, she asked her employer for an advance because her mother was extremely ill, but her employer refused.

A few hours later, the very same employer showed the house maid the brand new lipstick she had just bought – a MAC product worth more than her salary. The house maid was naturally furious and disappointed: 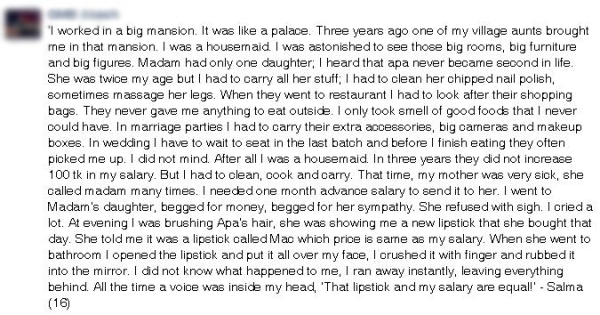 What happened then? Did the house maid’s mother survive?

I doubt it. She didn’t have enough money for the treatment and her employer had refused to give her an advance.

Did the house maid find another job?

And the employer? Well, she must have bought her daughter a new lipstick in a couple of hours.

So who do we blame for what happened?

A young man from an upper middle class family rushes to the hospital because his dad had a heart attack. The pharmacies are on a strike thus he has no choice but to go to the only pharmacy that is open, which is quite far from the hospital. However, he manages to reach and purchase medicines worth Rs40,000.

He puts his hand in his pocket to take out the money, only to realise that he forgot his wallet (with all his money and the ATM card) at the office because he left in such a hurry. He begs the shopkeeper to let him take the medicines and he promises to return after a while to pay. But the shopkeeper tells him that his sahib will sack him if he does that. The young man begs the shopkeeper to call the sahib and make him talk to him. But the sahib is sleeping. The drive to the pharmacy took 40 minutes and this argument and pleading alone took another 30 minutes.

His father died. The son must have died too, emotionally if not physically.

The shop keeper still has his job. The sahib is still sleeping.

Who do we blame now?

These two stories remind me of a third.

A labourer works at a minimum wage in a factory. His daughter fell and broke a few bones and he needs money for her treatment. The contractor that hired the labourer has money (I know this because he recently donated Rs20 lac to a cancer hospital and had his pictures published in the newspapers).

It doesn’t take rocket science to figure out what happened when the labourer approached the contractor for some money. He refused, of course, thinking the labourer was lying just like everyone else.

How easy would’ve things been had the labourers daughter had cancer instead of broken bones?

The daughter is in pain, she has broken bones. The labourer is helpless. The contractor is off for Umrah.

Now who do we blame?

The employer in the first story?

Sahib or the shopkeeper in the second?

Contractor in the third?

The maid and the labourer for being born poor?

The young man for forgetting his wallet?

“We cannot let them die, just because they cannot afford to live.”

And guess what a capitalist society is based on? It’s based on the statement,

Capitalism produces disparity and inequality – a class system that furthers intolerance, insensitivity, conflicts and wars around us. Capitalism is a redundant system as it is not capable of giving anything to the vast majority of human beings on this planet.

According to a study conducted by OXFAM International, the annual income of the 100 richest people can end poverty four times over.

What good is a system that is so vulnerable to abuse? Wealth in the hands of a few gives them the power to run this world as they please, and play with all other human beings, by treating them like puppets. A capitalist system is rigged in the favour of the rich, while the lives of people becomes harder as you go down the economic ladder.

A system of governance should be such where all human beings are considered equal and there is an equitable distribution of wealth and resources. In other words, class system should be banished. Having said that, the state should provide its citizens with education, healthcare facilities, housing and basic needs – where life is not spent in the struggle to just assure economical stability.

In such a state, people will focus on excellence. People will not be in a rat race just to earn a place in society, as they will be out of the economic shackle – a system that leads to a better world.

The author is a fourth year MBBS student. She is a social activist. She runs volunteer programs at SIUT and INDUS hospital and is an Ex Pildat Youth parliamentarian. She tweets @SeepAkhtar twitter.com/SeepAkhtar