Why does Virat Kohli turn Pakistan so green? 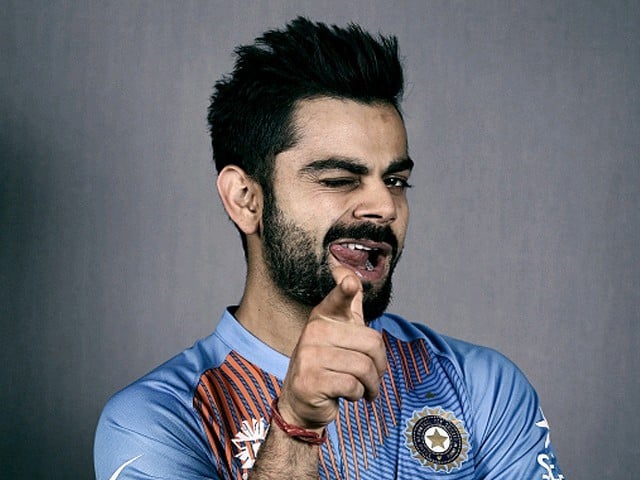 Whether it’s a tickle past fine leg or a glorious drive through the covers, the man has it all—and everything in between. Years of struggle, an unyielding passion, supreme talent and hard work have made Virat Kohli the cricketing tour de force that he is.

Yet, every time he strides onto the pitch and takes guard, a nation of over 200 million people turns whichever shade of pale or red they possibly can. Those on the yellower side fear the onslaught, while viewers with blood rushing to their faces are wishing the Indian maestro nothing short of death. Such is the impact he has on Pakistanis; no matter where they live.

The 2016 T20 World Cup clash between cricket’s ultimate arch rivals was a stark reminder of Kohliphobia as many pairs of folded hands prayed for his dismissal. Will it be Virat Kohli or Shahid Afridi who shines for their team in this colossal India vs Pakistan Asia Cup T20 match?
Photo: Reuters

As most batsmen would, he took a look around to get a visual idea of the gaps in the field, but that is where similarities ended between mere mortals and Virat Kohli. After a few sighting deliveries, he was penetrating all those gaps with consummate ease and the bowling attack, no matter how capable, was being torn apart. The ball was sometimes just tapped to the boundary as fielders gave futile chase.

As Kohli raised his bat to take in the adoration of the crowd for yet another fifty, Pakistani players and fans turned green with an envy that matched the colour of their shirts. Switching off the television at the end of the match, the more analytical of the lot throw their heads back to think of what could have been. As the day’s play replayed in their heads, a moment of eureka occurred for some and they realised that this misplaced hatred was actually reverence.

Time to your raise your bat again Virat Kohli, you turned your biggest detractors into fans; many just didn’t know it at the time.

As a Pakistani who has cried over lost cricket matches, and a broken Ihsan “The Khan” bat from my childhood, I hoped Kohli would either spontaneously combust or get wrapped on the crown jewels by a whizzing delivery from one of our “formidable” quickies.

Avoiding all ill wishes from across the border, he raced on. Cutting, driving, hooking—yes the latter is a shot and not a profession even if the person is Indian. Virat Kohli scored his second century of the Test to become only the second skipper to have made hundreds in both innings of a captaincy debut. Kohli joined Greg Chappell — 123, 109 n.o. vs West Indies at Brisbane.
Photo: AP

But therein lies the beauty of a batsman who our cricketers, and perhaps the nation itself, need to learn from rather than envy.

Here is a man who puts a value on his wicket. When he strides out, Kohli knows that this is an important scalp at the crease.

In order to represent a nation, an individual needs to value her or himself and their presence in the field of play. Every time India’s new maestro swings the bat, he does so with incredible skill, but more importantly, ultimate responsibility.

Can we say the same for any of our willow smiths? The wealth of our talent lies with batsmen such as Umar Akmal and the Kohli wannabe called Ahmed Shehzad. There is no doubt that both these men have talent, but their last 10 dismissals when wearing green amply demonstrate that the upcoming selfie takes precedence over a Pakistan win. The only man who seems like he may want to stick around for more than a delivery or three is wicketkeeper Sarfraz Ahmed.

Kohli can be described in a one-worded sentence; perfection. Similarly, as can our entire battling line-up; albeit with a slightly different word; callousness. Virat Kohli bows down in front of the stand where Sachin Tendulkar was seated.
Photo: AP

All Pakistani cricket buffs were secretly disappointed with themselves for disliking the great Sachin Tendulkar without acknowledging any of his achievements or appreciating the immense talent. Here’s a chance to right that wrong. Appreciate the history that is in the making; you may thank yourself for it one day.

A sub-editor at the Peshawar Desk of The Express Tribune. He tweets at @fahhdhusain (twitter.com/fahhdhusain)

Will Karachi ever receive the same affection as Lahore?

Today, one of the greatest voices in the Subcontinent was silenced

Between the buns: A brief history of Karachi's love affair with burgers