Hotal is entirely an intolerable piece of hogwash 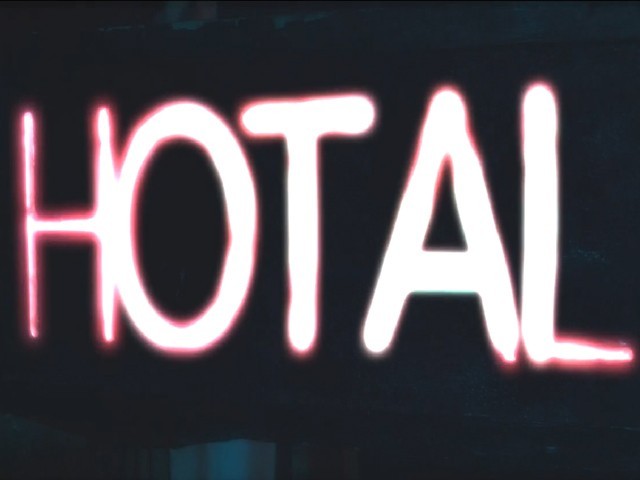 To tell you the truth, Khan’s independent movie cannot be categorised as a typical Pakistani film except for the fact that it showcases Lollywood star Meera and other Pakistani artists. PHOTO: SCREENSHOT

Hotal, the work of a New York Film Academy graduate, Khalid Hasan Khan, offered nothing surreal and nothing to write home about. Even though he won the Best Film award for his debut psycho-thriller at the Delhi International Film Festival 2014, his movie Hotal failed in many aspects. The lack of continuity, an insubstantial plot, and frequent editing bloopers served as serious mistakes that made the movie an extremely horrendous watch for the viewers.

Hotal revolves around Kashika (Meera) and her wish to give birth to a daughter while her husband Naresh (Humayun Gilani) absolutely does not want to have another daughter. Her second pregnancy creates a lot of unhappiness in her marriage and her husband insists on taking her to the doctor, hoping to get answers to why his wife cannot bear him a son.

The doctor then advises the husband to take his expecting wife to a place named Hotal. This place is situated on the outskirts of the city and the doctor there handles such cases by performing illegal abortions. Except his wife has no idea he’s taking her there for this reason. At the Hotal, Kashika starts seeing disturbing visions of her unborn sister and soon the reality begins unfolding before her eyes. She starts to put the pieces of the terrifying puzzle together. With the help of her ghost sister, Kashika eventually dodges the infamous doctor. The rest of the plot revolves around a CBI inspector and a vengeful woman looking for her twin sister’s assassin. To bolster the shaky and confusing storyline, the characters of a tight-lipped administrator, a cook, a gardener, a mysterious Poornima (girl born on a full moon day) and a talkative taxi driver were included to create a more convoluted and baffling crime thriller. To be honest, Khan’s independent movie cannot be categorised as a typical Pakistani film, except for the fact that it showcases Lollywood star Meera and other Pakistani artists. The film exhibits a very Bollywoodish aura starting from characterisations, to costumes and locations. Even the prime language of the script is Hindi. Despite various similarities, Pakistani moviegoers may not be able relate to these things. Credit where credit is due, Khan should be appreciated for selecting a bold issue such as female foeticide; the hideous practice of killing female foetuses illegally via induced abortion. In the sub-continent, there are numerous doctors and private clinics where illegal abortions are done due to the cultural preferences for a son.

Despite strict laws and punishments for such acts, this obnoxious practice is on the rise in Pakistan, India and China. The yearly average number of sex selective abortions in Pakistan is 116,384, whereas China witnesses around 800,000 and India witnesses 600,000 abortions per year. Khan’s screenplay tried to touch upon the socio-legal complexities of this abhorrent custom. However, the loose grip on the plot, low production value, irrelevant songs, ostentatious dances, and countless lapses in logic and reason turned Hotal into an intolerable piece of hogwash. The plot turns whacky midway and characters seem to mindlessly jump into scenes out of nowhere. Instead of carefully considering the set design, cinematography, costumes, lighting and background music, all the attention has been wasted on irrelevant item numbers such as Lakshmi and Mombatti. Similarly, the Hindi diction of all actors failed to impress audiences. I fail to understand the director’s logic behind this.

Although, Meera won the Best Actress award for her character of Kashika at the Delhi International Film Festival 2014, there is nothing praiseworthy about her performance. She has delivered the same performances in the past as well; Billi (2000), Khilona (1996), Khoye Ho Tum Kahan (2001). Hotal is definitely not a feather in her cap.

All in all, Hotal is a freaky product, not a spine-chilling psycho-thriller.