Don’t settle for a foreign passport if it means taking a gamble on the man, girls! 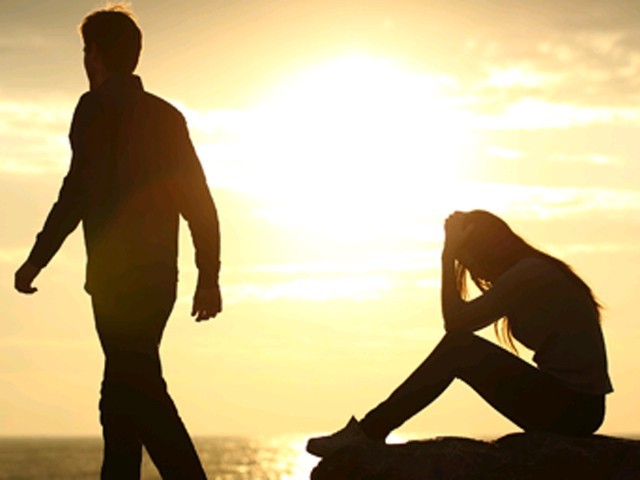 It doesn't matter whether you're male or female. Nobody likes to break-up. Still, it happens. And whether you're the one instigating the break-up,the one on the receiving end—or even if it’s mutual—it stings. Photo: http://www.nutri-health.com

Twenty is an age that comes slow and fast, all at the same time. It is a young age but you’re expected to know so much more as a person and act like a grown up even, though you were a teenager just the year before. When you are young, a lot of things seem like a good idea; when in reality they are the complete opposite.

Eventually one does come to terms with the mindless choices they make but, if these choices are looked at as life lessons, they don’t seem so bad anymore. After all, being young usually entails being easily influenced and making a lot of impulsive decisions.

I was born in Pakistan and lived there up until I was around seven-years-old. Then our family moved to the US. Eventually, we ended up in Canada. Life in Canada was great but, of course, coming from a Pakistani family, marriage is a subject almost every girl has on her mind at one point or the other. My background makes me well aware of the many social issues we have in our community.

When you finally meet someone that makes you feel like they are ‘the one’, you do what most people would do when they are ready; put a label on it. When I was 20, I met someone. I thought he was my equal and I did what anyone else would have done in my place had they felt the same way; I said yes. Everything was like a fairy-tale in the beginning. Soon after, I came to realise that this decision was not as good as I had imagined it to be.

My family has raised me to be a very independent and outspoken individual – qualities that did not mesh well with my ex-fiancé’s family. His family’s version of an ideal woman was a stay-at-home mom who did whatever her husband asked her to do.

And I was far from that.

We had many differences and for the longest time I tried really hard to make things work. I tried convincing him to accept new ideas but you can’t really change the way a person is and how they have been raised. These persistent differences were why I decided to end the relationship.

I could never see my life taking 10 steps back and I definitely could not see myself turning into a muted version of the woman I am by silencing my opinions because someone else didn’t think they were right. At the time, the divorce was devastating to deal with. But, as time passed, I came to terms with it. I believe that it has made me stronger than I have ever been before and, for that reason, I look at this experience as a blessing in disguise.

Whether it’s the 1980s or 2016, arranged marriages are still a very real “thing” in Pakistani communities all around the world. It is part of our culture and it brings two individuals and their families together in a beautiful celebratory manner. Although we hope, pray and wish for the very best for every couple tying the knot (arranged or love); things do not always go as planned.

Whether it is an engagement, a nikkah, or the full on shebang of a wedding, there may be unexpected circumstances that lead couples that have no choice but to part ways. This is not just in North America but all around the world; it’s a common thing that is accepted by most cultures but frowned upon in the Pakistani community.

I have first-hand experience in the matter so I can undeniably say it is hard for both parties involved. After the split, each individual goes out looking for other sources of happiness; regardless of what form it comes in. I have noticed that the next step for some Pakistani men in North America is to pursue an arranged marriage to someone in Pakistan. Being formerly engaged to a Pakistani-Canadian man, I can definitely say that I understand this pursuit from various angles.

When my relationship came to a halt, my ex-fiancés family actively started searching for girls in Pakistan and were actually successful in finding him someone. But I know that this new girl will never be treated the way I did; she will be expected to put everything aside for this man just because she isn’t from Canada. I don’t think this is fair at all to any woman, no matter what part of the world she belongs to.

Firstly, it is highly unfair on me to not only be labelled as the “bad apple” for being liberated and open minded, but to also be held accountable for the relationship falling apart, when the real reason was that our mentalities were not in sync. Secondly, it’s not fair to the girl in Pakistan because she’s expected to pick up the broken pieces of our relationship and try to build a new one around the expectations of the man and his family.

Do not get me wrong, there is nothing wrong with that. But the point that I’m trying to make here is that most of these men are just confused and tired of their own demons and feel that someone from the motherland will undoubtedly understand and obey them to the fullest extent. These men will never face their feelings and right their wrongs because, to them, Pakistani girls will do whatever it is that they wish.

The girl is looked at as something that would be the equivalent of “play-doh”. They can mould them into  whatever they feel fit. This way of thinking has got to change. Women all around the world have the right and full freedom to do as they wish. The geographical location of a person does not define them in any way, nor does it make one better than the other.

Women and girls in Pakistan do not need to conform to the expectations of these men just because these men come from the West. One should pick and choose their opportunities and be wise about all their life decisions. A marriage proposal from out of the country is not always the golden ticket that it is sometimes perceived to be.

Some girls may think of this as “one man’s trash is another man’s treasure” but sometimes you just can’t recycle the pieces. You should never feel like the second option. Ever. Just because things did not work out with the girl these men originally sought, does not mean that they get to pick and choose their way through Pakistan or any other part of the world. I urge women in Pakistan and their families to really think twice before giving these men a validation of marriage.

Education, morals, and values should not be overlooked because of a man’s geographic location. Know your worth; you are worth so much more than just a North American passport. I am in no way writing this to make women feel like all men in North America are bad, but rather to make women aware that they can avail many other opportunities in life instead of giving up everything and moving across the world for someone who might not even treat you as his equal. If you know the person, if you know his family, his mindset, then yes, it is a different scenario altogether. But the only requirement should not be a foreign passport.

Keep looking for the one that genuinely thinks you are the best woman in the world. Don’t settle for someone just because they live abroad because, at the end of the day, you never want to think “what if?”

It’s not worth your time and effort if it’s not genuine.

Knowing your worth and finding an equal that makes you happy is everyone’s right. One should never settle for anything less than that.

The author wishes to remain anonymous.