‘Honour’ killings must be exposed for the inhuman, senseless horror that they are! 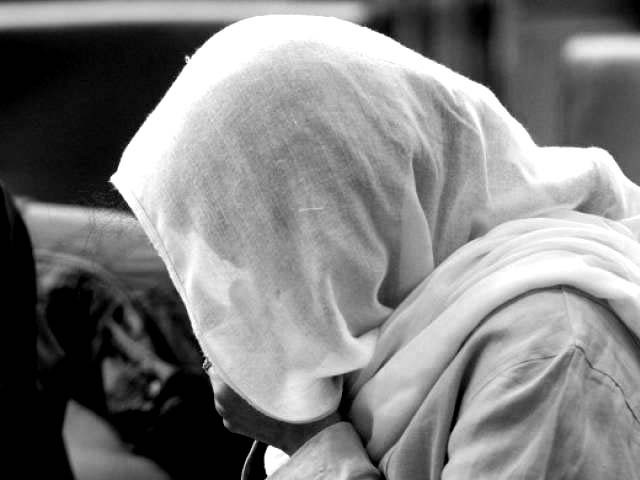 On April 28th, a 20-year-old man stabbed his sister to death after he overheard her talking to a boy on the phone. PHOTO: STOCK IMAGE

Three incidents in the past month have brought honour killings to the forefront of national discourse in Pakistan. On April 19th in Jhelum, a man shot his daughter and her husband along with two members of the husband’s family. By going against his wishes and marrying the man of her choice, she had ‘dishonoured’ him.

On April 28th, a 20-year-old man stabbed his sister to death after he overheard her talking to a boy on the phone. On the same day, a 16-year-old girl was drugged, strangulated to death and placed in the back seat of a van which was then set on fire. According to media reports this was on the orders of a 15 member ‘jirga’ (local tribal council) to punish her ‘crime’ of helping a friend elope and marry a man of her choice.

Honour killings have been traced as far back as ancient Rome where the pater familias or patriarch had the right to kill an adulterous wife or daughter guilty of fornication. Until the Middle Ages, stoning to death was the formal punishment for adultery under Mosaic Law in the Middle East and Europe. In Arab parts of the Ottoman Caliphate, it was customary for a man to kill an adulterous wife and sprinkle her blood on his clothes as evidence of his reclaimed ‘honour’.

Today, honour killings still exist in most parts of the world. In South America, they are part of ‘Machismo’ crimes although they are often difficult to distinguish from the thousands of drug-related killings of women. The issue came to the forefront in Honduras after the 2014 murder of Miss Honduras, Maria Jode Alvarado. In Brazil, it was not till 1991 that ‘protecting honour’ was disallowed as an acceptable defence for murdering a wife. Prior to this, hundreds of men successfully used this defence each year.

Nowhere in the world though, do honour killings exist with as much frequency as they do in Pakistan. An estimated 1,000 women are murdered each year on suspicion of premarital sex, adultery and for elopement. There are no reliable numbers for the number of men killed in these instances although the average is estimated to be between 100 and 200 each year.

The issue was historically a taboo topic, but came to the fore after the high profile murder of Samia Sarwar in 1999. Ms Sarwar was the 29-year-old daughter of a well-known Pakhtun industrialist, Ghulam Sarwar Khan Mohmand. She eloped with an army officer and when threatened by her family, sought out the services of Asma Jahangir and Hina Jilani, who are well known women’s rights lawyers.

On April 9, 1999, her mother requested to meet her in the lawyer’s offices. She asked that a man be allowed to accompany her as she was too frail to walk up the steps. On arrival, the man pulled out a weapon and shot Samia point blank, killing her. Her husband was discharged dishonourably from the army and no one has been punished to date for this crime.

Sadly, Samia’s case is the norm and not the exception when it comes to ‘honour’ killings. It seems these murders go largely unopposed at both the local as well as the national level. While it is hard to determine how much actual support such practices have, there is certainly a tragic lack of effort to put an end to them.

The annual report of Pakistan’s Human Rights Commission released in April 2016 includes the following salient features:
– In 2015 an estimated 1096 women were murdered in these incidents, the majority by relatives who accused the women of disrespecting family honour.
– Supposed sexual relations, exercising the right of choosing a spouse and other domestic disputes were the major causes behind these deaths.
– Most of the victims died from gunshot injuries while others were beaten or stabbed to death.
– At least 88 men also died in honour-related killings. Out of these men and women, 170 are estimated to be less than 18-years-old.

The actual numbers could be much higher since such crimes often go unreported or misreported as accidents or suicide.

One of the obstacles in tackling ‘honour’ killings is that attempts at progress legislation to protect women have been repeatedly sabotaged. The Women’s Protection Bill passed by the National Assembly of Pakistan in 2006 aimed to amend the draconian ‘Hudood’ Ordinance enacted by Military Dictator Ziaul Haq in 1979 is an example. The bill eliminated capital punishment for premarital sex which will instead be punished by imprisonment of up to five years and a fine of Rs10,000 (adultery continued, however, to carry a death sentence).

The punishment for rape was increased to 25 years of imprisonment except for gang rape which would carry a death sentence. A complaint of adultery would require at least four witnesses testifying under oath that they witnessed the act of penetration. Unfortunately, mainstream religious parties have opposed this bill tooth and nail both in the legislature as well as in the Federal Shariat Court. The end result has been that the abhorrent landscape of sex-related crimes and their prosecution remains unchanged 10 years after the bill was passed.

Under the Hudood Ordinance, rape victims were indicted for extramarital sex if they failed to produce four male witnesses to the assault. Unsurprisingly, the risk of imprisonment dissuades most victims from seeking justice against their assailants. The new bill proposes to eliminate the clause that being unable to prove rape results in automatic charges against the accuser and to allow forensic evidence such as DNA to be used in court.

By all indications, this abhorrent practice will continue unabated unless these crimes are cogently legislated against and killers are consistently prosecuted proportionate to their crimes. Furthermore, legislations that prescribe capital punishments for extramarital sex must be abolished. They prevent any meaningful initiative to highlight the moral depravity of ‘honour’ killings and may even encourage such acts.

‘Honour’ killings must be stopped. They must be exposed for the inhuman, senseless horror that they are. And legislation is only the first step. We must get religious scholars on board; unequivocal religious censure of the practice will be an important part of undermining it on a national level. But even this will not suffice. We must take a leaf out of the successful anti-FGM campaigns in Iraqi Kurdistan and Senegal. There must be outreach, especially to rural areas with the highest prevalence and recruitment of local people as activists – who know the idiosyncrasies of the community and can help communicate to others with mutual respect for the wider traditions of the community and prevent hurting sentiment and eliciting a backlash. Only sustained campaigns at the grassroots level that continue to inform, educate and encourage change, will succeed in putting an end to this abomination.