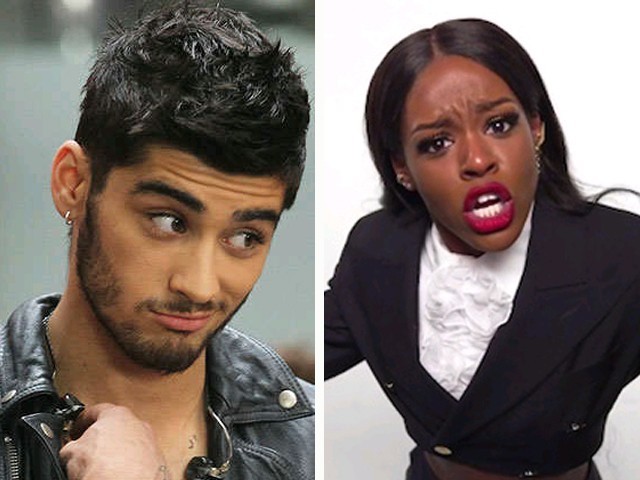 Azealia Banks racial attack is not new and what’s sad is the fact that she was probably just being desperate.

My niece is a huge ‘One Directioner’ (is that what they are called?) and was heartbroken when the boy band lost one of its key members, Zayn Malik.

We insist on a special connection with this young musical icon on account of sharing a nationality and probably having a Zain for a classmate or a Malik for a neighbour. This gives us the inalienable right to judge him of course; from his tattoos to the racy lyrics of his new singles.

(The boy is getting out of hand!)

He should thank his lucky stars he isn’t a woman.

So it follows that any news about the boy-wonder is obsessively analysed and shared over social media (not only because of his music but also because he’s brown). Take, for example, the fact that Azealia Banks (one hit wonder) was recently removed from the line-up at the London Music Festival for trying to bait Malik with racially charged plagiarism accusations on Twitter.

This isn’t news, really. The lady in question is famous for multiple; long running attempts at piggy-backing on the fame of other popstars by engaging in public feuds online and has only two mildly famous singles to her credit. The debate over race, however, has been in the limelight (more than usual) for several months now, with the USA and UK elections, the Oscars, the refugee crisis, the increase in xenophobia and Islamophobia, and various other current events sparking outrage or sympathy from various quarters.

Even white people have begun to assert a sense of ‘White identity’ often complaining that while other minorities are encouraged to be proud of who they are, they are immediately labelled as racist if they attempt to show similar pride.

Racism is also endemic in Pakistan. We discriminate in terms of caste, religion and skin tone on a daily basis. Every dusky female has some kind of body shaming horror story to share and racist slurs for members of minority religions are commonplace.

Azealia Banks’ racial attack is not new and what’s sad is the fact that she was probably just being desperate. Mindlessly spewing whatever she could think of at an astronomically (no arguments possible here) famous popstar; hoping for a response that would put her on the front page of celebrity tabloids and allow her to play the victim later. She certainly got part of her wish. The rapper seemed to taken exception to Zayn’s background, a Yorkshire-born singer to a Pakistani father and an English-Irish mother who was raised Muslim
Photo: Mail Online

Racism, however, is only part of the problem. The real issue is how easy it has become for random nonsense to make you famous. Think Taher Shah, Abid Cutes, and the hundreds of teenagers churning out entirely unfunny and unoriginal vines and videos on the internet.

Nothing, absolutely nothing, not acting, not props, not plots, nothing distinguishes one group of hairy men in bermudas acting like monkeys from the other. The worst part is that suddenly it’s okay to make completely inappropriate (and sometimes cruel) jokes about your friends, parents and that girl who takes the same bus as you do.

Of course, there are notable exceptions. Some people do make genuinely funny, thought-provoking and original videos, but that doesn’t mean that every Shafeek, Aslam and Amir needs to pick up their camera phone and start sharing. Freedom of speech, sure, but don’t you people want to be able to get jobs when your ‘YouTube Star’ career somehow fails to take off? This also counts for the videos you post of your friends online. I act like a weirdo with my friends but if one of them records it and puts it on Facebook then I’ll have bodies to take care of and that would be awkward.

This also counts for lengthy, emotional Facebook statuses, tweets, online spats and the likes. These things last forever. You might realise that you’re absolutely wrong and completely dumb the second you press post. Or worse, you might not realise it at all.

Attention has now become a bankable commodity. Don’t throw yours away on things that mean absolutely nothing in the grand scale of the universe. Move your discourse away from celebrities (and attention-seeking teenagers whose parents don’t monitor them) to real issues like the numerous ecological and social problems this country faces. Highlight real heroes; people who are truly educated (I don’t mean just degrees here) and do good either in your immediate community or on a larger scale.