Changing maps will not mean Kashmir is a part of you, India 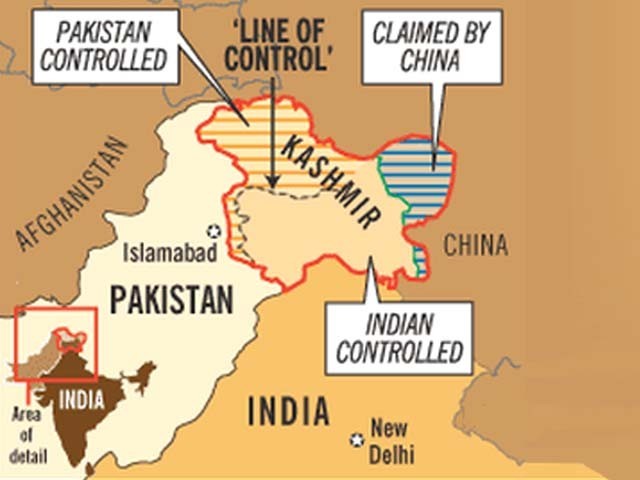 The correct legal position under international law is the whole state of Jammu and Kashmir is designated as disputed territory. PHOTO: mclaughlinhistory

The Indian government wants to pass the Geospatial Information Regulation Bill (GIRB). This bill will essentially make any map in India (ONE that does not toe the official line on geospatial information provided by the Indian government) illegal and liable to seven years in jail and a fine of up to a whopping billion Indian rupees.

Predictably Pakistan reacted by shooting off a letter to the United Nations (UN) protesting that the official Indian maps show the disputed territories of Kashmir as wholly part of India, including Azad Jammu and Kashmir (AJK). While one respects the sovereignty a foreign nation state, the provisions of this law are draconian to say the least and as such the impact of this law is another example of how national governments everywhere are anxious to control information. It also shows the absurdity of conflating political ideology with cartography which flies in the face of cold hard facts.

Those facts are that a part of the erstwhile Jammu and Kashmir state is occupied by India and a part of it is under Pakistani control. The Kashmir issue is the longest standing dispute on the UN’s agenda and the resolution passed by the UN Security Council remains in field. At the end of the day, Jammu and Kashmir belong first and foremost to the people of both Indian occupied Kashmir and AJK. The correct legal position under international law is the whole state of Jammu and Kashmir is designated as disputed territory. This correct legal position should be reflected on the map as well. If the legal position is not tenable, then at the very least the de facto border i.e. the line of control must be reflected.

The official Pakistani gripe over inclusion of AJK in the map, however, is only the tip of the iceberg. The proposed law goes beyond mere political point scoring and this is not merely a national issue. The precedent that India, as the world’s largest democracy, is about to set will be emulated by other regimes around the world and one fears something similar may eventually find its way onto our statute books as well.

So what is at stake?

Section 2(e) of the GIRB defines geospatial information as imagery or data acquired through space or aerial platforms such as satellite, aircrafts, airships, balloons, unmanned aerial vehicles including value addition; or graphical or digital data depicting natural or man-made physical features, phenomenon or boundaries of the earth or any information related thereto including surveys, charts, maps, terrestrial photos referenced to a co-ordinate system.

Whenever this data is used it is to be subject to vetting by an awkwardly named body called the “Security Vetting Authority” (SVA). The bill empowers the SVA to issue licenses to both individuals and organisations that want to use geospatial information. This the SVA would do after taking into consideration “national security”, “sovereignty” and “integrity” of India. Obviously the language is designed to fit the legislation to reasonable restrictions imposed on the fundamental right of freedom of expression in India as granted under their Constitution. It remains to be seen if this law, as it is finally passed, is considered a reasonable or unreasonable restriction by the constitutional courts in India.

Now what does that mean exactly?

Almost every app and every major news body uses geospatial data. This includes Facebook, Twitter, Apple, Google Maps, Uber and so on and so forth. All of these international companies would be required to submit their geospatial data for “security vetting” by the SVA. The implication for the freedom of these companies is very grave. Very soon, almost all of us in South Asia will have to use maps that are officially sanctioned by the Indian government. Things would get even more interesting, if in a tit for tat move, Pakistan too was to pass similar geospatial regulation legislation.

Obviously such a move will backfire on Pakistan because it is a considerably smaller country and hence a smaller market for the aforesaid companies. What would make it interesting, however, is if China steps in with its own version. After all, China has its own border disputes with India. China already has geospatial regulations in place and while these too speak of national sovereignty, they are nowhere near as draconian as the Indian version.

The GIRB adversely affects individual freedom to keep any mapping data whatsoever. Now imagine that this website i.e. Express Tribune publishes a blog with a Pakistani map which shows AJK as part of Pakistan. Suppose this is re-tweeted by a person living in India. Such a person will fall foul of the proposed law. Dissemination of a map that is not officially approved or vetted carries the maximum penalty of up to seven years and 1 billion Indian Rupees.

Conversely, if geospatial data from India is used in anyway outside of India, it also carries a similar penalty. The whole scheme is fundamentally designed to discourage international debate or discussion about India, its borders or any physical, manmade or charted features within that country. Geospatial data, it must be remembered, is used in many ways. It can range from locations of local businesses to mapping of outbreaks of epidemics. By subjecting all manner of organisations, data scientists and researchers to harsh penalties under this law, the Indian government is basically going to shoot itself in the foot. Not only will it create innumerable problems for international companies, but it will discourage bona fide researchers carrying out academic analyses of data in fields such as medicine and irrigation.

Here is why this is relevant to us in Pakistan.

Those familiar with the legislative history of Pakistan know that whenever India passes a particularly draconian law premised on national security and sovereignty, Pakistan’s government feels duty bound to follow suit, often with disastrous consequences. After all, Pakistan is equally touchy about its “national borders” and the Kashmir question. Pakistan’s civil society and digital freedom activists must be alive to this challenge. Indian activists must resist the bill in their country and we must resist any attempts to duplicate it in Pakistan.