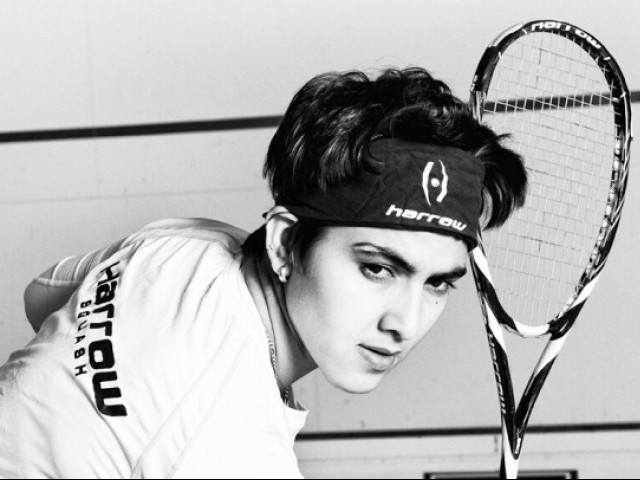 Maria Toorpakai’s life was fraught with challenges that no ordinary girl can dream to tackle. PHOTO: psaworldtour.com

I will ditch my bangles and my dainty shoes….

I will run as a boy and let myself loose….

They will spare my life if I turn into a boy…

And if I remain a girl, they will kill my joy…

Birds of a feather flock together. But if you aim to fly high, you have to leave the flock first. Such a bird is Maria Toorpakai. Her life is nothing short of a Khaled Hosseini’s novel; the war struck her home town, the high profile political family and the strangest dream in her eyes; to be a squash champion.

This unique daughter of Pakistan belongs to the land of men where women are creatures of bounded will. South Waziristan, the hub of war and terror is where this daughter was born to a prominent tribal elder who, as a father, is an inspiration to all men. He did not think of his daughter’s dream to be different as something unattainable and utterly absurd, which was exactly how everyone else saw it.

She decided to cut off her hair and burn her own clothes in order to look more like her brothers. She donned a new ‘male’ identity, named ‘Changez Khan’, a name given to her by no one else but her own father and Changez Khan became her identity.

Maria disguised as a boy with her mother and little brother.
Photo: http://mariatoorpakai.org/marias-story/

This brave ‘bacha posh’ girl (an old tradition of this region which allows little girls to pass off as boys for a little taste of freedom) wandered those rugged streets where the danger to her very existence lurked at every corner. Yet, her courageous parents knew better than to crush her exceptional spirit. As she grew up among those who knew her true identity, those who did not and those who suspected and made her life hell, Maria Toorpakai’s life was fraught with challenges that no ordinary girl can dream to tackle.

She tackled them with a righteous rage that she used to thwart those who belittled her in the streets or tried to contain her through made up religious restrictions. When her anger started resulting in fistfights and bloodied noses, her father decided to help her channel this passion into sports. Maria went to a gym in Peshawar where she was taught as Changez Khan. She started weightlifting and other exercises but now there was a different enemy at her heels, puberty. When she started looking more like a girl, her days became a whirlwind of hiding her identity around the gym.

What came to her rescue was the sport that she is renowned for today, Squash. She watched one exchange of the rhythmic ball-to-wall frenzy and was hooked. She trained alone for hours as she was afraid of her secret being exposed. As Changez Khan, she secured several wins against the boys and when her name was entered in the local tournament, she finally had to admit she was a girl.

As she shed off the protective armour of ‘Changez Khan’, she created numerous enemies. There were the insecure boys who she had constantly beaten in every game and there were the infamous Taliban who considered being born as a female as the biggest sin. Between the devil and the deep sea, Maria had to go into hiding to save her life. But, giving up on her dreams was something that was Greek to her. From her room in the remotest and deadliest corner of the world, Maria sent out applications to colleges, universities and squash players. After three years of disappointment, Jonathan Power finally answered her plea. He helped her relocate to Toronto where she currently works and trains at his academy.

Her bravado is commendable, but, it makes one wonder about the state of affairs we live in; even in this day and age, the notion of freedom remains attached to the male gender. We live in a society where a masculine name is more powerful than a real woman. The male identity justifies the liberty to wear, walk and talk in society while the female identity remains hidden under heavy veils.

It is not only the male name which exudes more strength than the women themselves but there are a number of words of the common tongue that are normally more valuable than a woman’s life. Such as honour, that’s a heavy word. It has claimed countless lives which were considered so trivial that they were sacrificed because of that one word.

The influence of the masculine identity, a mere name was so effective that it kept Maria Toorpakai alive for years. Her courage is exemplary and her individuality is precious but even she had to cut off her hair and dress up as a boy to have her life spared. How many other girls can pull this off?

Yes, you’re right. Not many.

It is thus imperative that we as a society stop promoting stereotypes that weaken half our population by forcing it to submit to the will of their male guardians. It is time for all the girls in the society to stop hiding behind Changez Khan and live their lives freely with their heads held as high as Maria Toorpakai.