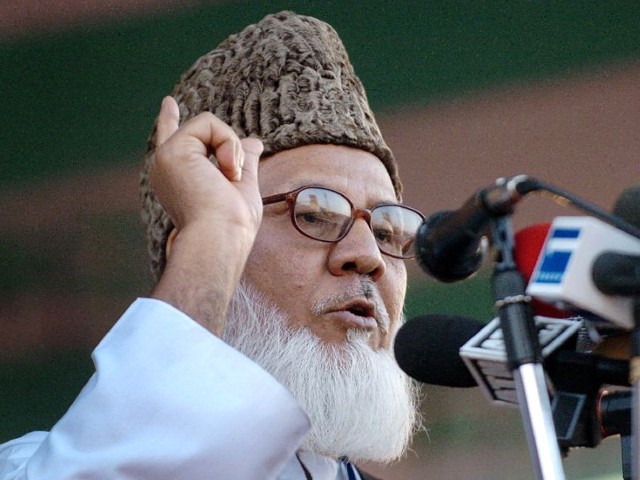 Motiur Rahman Nizami, the top leader of Jamaat-e-Islami until his hanging. PHOTO: AFP

On May 11, 2016, Bangladesh hanged Motiur Rahman Nizami, the 73-year-old leader of the Bangladesh Jamaat-e-Islami. He was the leader of the militant group Al Badr. The searing irony of this saga is that Pakistan’s ruling elite in 1971 outsourced the safeguarding of Pakistani nationalism to unsavoury characters from the Jamaat-e-Islami’s student wing when Jamaat-e-Islami itself had opposed tooth and nail the creation of Pakistan just 24 years earlier in 1947.

The brigands of Al Badr were launched by the Pakistani military against a Bengali population which had in 1947 stood unwaveringly with Mr Jinnah and the Muslim League in the Pakistan Movement. In 1965 the same Bengali population had voted en masse for Fatima Jinnah against Ayub Khan. On both occasions – in 1947 and 1965 – Sheikh Mujeeb ur Rehman, the future father of Bangladesh, was at the forefront of the movement. In the 40s, he had famously cycled from one town to another to attend a Muslim League rally. It was young men like Sheikh Mujeeb ur Rehman who had taken the message of the Muslim League to the nook and cook of Bengal. Without Bengalis, Pakistan would never have been possible.

In 1971, the same Bengali population was being treated as traitors to Pakistan by a military regime that was incapable of telling friend from foe. We must recognise as Pakistanis that the demands Sheikh Mujeeb ur Rehman had laid before West Pakistani rulers were in complete consonance with the Lahore Resolution of 1940.

We must also accept that Sheikh Mujeeb had won the election and instead of imposing a centralised majoritarian rule on Pakistan, the Bengali leader was offering Pakistan a vision that was not too different from the one Mr Jinnah had asked for in United India.

Truth be told, a stronger, fairer and more democratic Pakistan would have emerged had we had the foresight to accept Mujeeb’s six points, just as a fairer more democratic and truly federal India would have emerged if Congress had accepted Mr Jinnah’s vision for a United India. Instead both Mujeeb and Mr Jinnah have been cast as separatist founding fathers of the states that they fathered only reluctantly. Every Pakistani should read Mujeeb’s unfinished memoirs to at least learn the other side of the story.

Mujeeb was a patriot who wanted equal rights for his people in the Pakistan that he had fought for as a young activist.

Instead of learning from history, the myopic centralising objectives of the Pakistan’s ruling junta put us squarely on the wrong side of history. We let loose gangs of brigands, including people like Motiur Rahman Nizami, on a hapless population whose only crime was that they had voted for the Awami League. In the last days of the unfortunate war which saw the dismemberment of Pakistan, Al Badr along with Al Shams and the Razakars went on a killing spree against Bengali intellectuals. It was for these crimes that Motiur Rahman Nizami was tried and hanged by Bangladesh.

One is not enamoured with the death penalty but one cannot help but think that if there was any occasion for the award of the maximum punishment, it was this.

As a Pakistani, I am ashamed of my country’s response to the matter. The Foreign Office denounced the hanging saying that Motiur Rahman’s only crime was that he was loyal to the Pakistani constitution. What constitution was in force in Pakistan in 1971?

The Constitution of 1962 had been abandoned. The interim Constitution of 1972 or the present Constitution of 1973 were yet to be enacted. There was no constitution to be loyal to. What we had was an illegal usurper regime in power in Pakistan which was denying the elected majority party of Pakistan, the Awami League, the right to form its government and to fashion Pakistan according to its will. When history is written impartially this is the only version that will survive. The great tragedy of Pakistan was that usurpers were in power by virtue of their bayonets and not by the will of the people.

Bangladesh has attempted to right the wrongs of the past through making war criminals accountable. One can disagree with their approach, but one cannot deny that it is their internal matter now. Pakistan’s reaction on the issue will only widen the gulf between the two states. More importantly it is a message that we still have not learnt from the mistakes of the past. Indeed we continue to repeat the same mistakes, be it while dealing with Baloch separatists or through our continuing relationship with the ‘good’ Taliban in Afghanistan. The situation calls for a clean break from the past but it seems that the think-tanks of the Pakistan’s deep state are only busy regurgitating questionable wisdom of the past.

Meanwhile, Turkey’s decision to recall its ambassador from Bangladesh in wake of this hanging is also instructive. That country, too, has unfortunately been unable to come to terms with actions of the Ottoman Army against its Armenian population at the end of the First World War. It sees, therefore, a parallel between Bangladesh and Armenia. Both Pakistan and Turkey are living in denial about the past. Modern nations, secure in their identity, do not need to sweep past atrocities under the carpet. Both Pakistan and Turkey must accept that atrocities were committed against sections of populations that were their own citizens at the time. It does not mean accepting extravagant claims of genocide necessarily and, truth be told, on all sides there has been a lot of exaggeration. Still, both Turkey and Pakistan must accept that they failed their own citizens. Lashing out at Bangladesh will not change the facts of history.