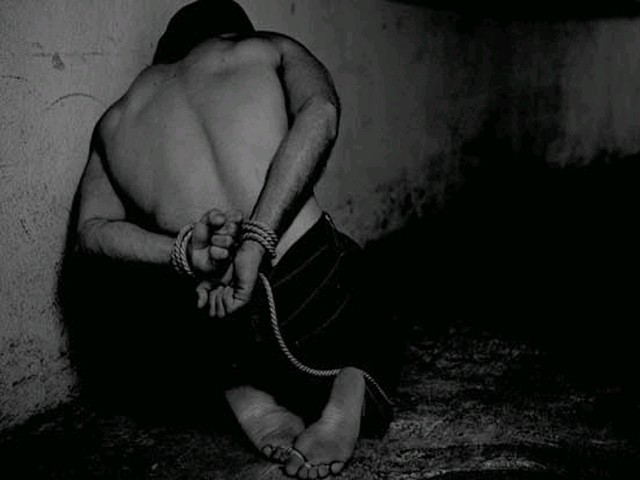 How I was radicalised by the state (allegations of terrorism and torture). Photo: London Progressive Journal

Did Aftab Ahmed’s death bring custodial torture into the limelight or did a can of worms just open up in Pakistan? What puzzles me is the inquiry ordered by the Chief of Army Staff. What is there to inquire now; the fact that he was tortured? Yes, he was. Isn’t it too obvious from all the marks on his body and report of the medico-legal officer (MLO)? Will the inquiry probe into reasons why the Rangers deemed it necessary to torture him? Are there any reasons which necessitate torture in the first place?

These are questions our government should have been addressing way before this incident. The Human Rights Commission of Pakistan (HRCP), Asian Human Rights Commission (AHRC), World Organisation against Torture (OMCT), Amnesty International and various other international human rights organisations have raised serious concerns over the use of torture in Pakistan by the law enforcement agencies during interrogation and pre-trial detention of the suspects. Yet, there are no specific laws in place to criminalise torture.

When the CIA torture report was published in 2014, Pakistan condemned the “systematic torture” of terror suspects but what about the systematic torture in Pakistan? In fact torture is so ingrained that police officers believe that slapping the suspect, pushing him or her around and chittars (beating with shoes) do not even classify as degrading or inhumane treatment. It is as if these practices are codified in the Code of Criminal Procedure (CrPC) and are an integral part of carrying out arrests, interrogations and detentions. Indeed torture is the most common tactic used to coerce confessions out of suspects and one of the leading causes behind false convictions in Pakistan.

Legally, torture is prohibited in Pakistan as per Article 14 (2) of the Constitution of Pakistan,

“No person shall be subjected to torture for the purpose of extracting evidence”.

Pakistan has also ratified Convention against Torture and Other Cruel, Inhuman or Degrading Treatment or Punishment (CAT). The Convention explains:

“The term ‘torture’ means any act by which severe pain or suffering, whether physical or mental, is intentionally inflicted on a person for such purposes as obtaining from him or a third person information or a confession, punishing him for an act he or a third person has committed or is suspected of having committed, or intimidating or coercing him or a third person, or for any reason based on discrimination of any kind, when such pain or suffering is inflicted by or at the instigation of or with the consent or acquiescence of a public official or other person acting in an official capacity.”

Article 2 of the Convention requires each State Party to,

“Take effective legislative, administrative, judicial or other measures to prevent acts of torture in any territory under its jurisdiction.”

However, even after six years since ratification, Pakistan has not yet enacted legislation necessary to implement the Convention. The Asian Human Rights Commission (AHRC) has been advocating anti-torture legislation since 2009. In January 2015, the Senate Standing Committee on Interior and Narcotics unanimously adopted a draft anti-torture bill, but it is pending in the National Assembly.

Sadly, this is true at a time when there are debates around the world regarding such issues and decisions by international courts and tribunals for example, distinction between degrading and inhumane treatment and torture, if forceful medical intervention during detention can be classified as torture; whether torture can be justified in the “ticking-bomb” scenario etc. keep making the headlines.

Torture is prohibited under all circumstances.

The European Court of Human Rights (ECHR) assesses the severity and intensity of the suffering inflicted under torture by taking into account factors such as the victim’s sex, age, state of health as well as the duration, physical and mental effects, and the manner and method of the execution of torture. In case of an injury during detention as a result of physical force, the authorities are under an obligation to show that the force “was necessitated by the detainee’s own conduct and that only such force as was absolutely necessary was used”, (Ribitsch v Austria, ECHR). In fact, the ECHR has even ruled that certain conditions of detention can also amount to inhuman or degrading treatment for example, absence of ventilation and sleeping facilities and overcrowding, (Dougoz v Greece; Peers v Greece, ECHR).

A lack of similar debate and absence of legislation and policies in Pakistan therefore remains a worrying notion. There might be many reasons behind this. Incompetency of legislators, unwillingness of the executive or merely the red tape involved, it is anyone’s guess.

However, what is not just a guess but the cold hard truth is that precisely due to these reasons torture is an institutionalised practice in Pakistan. There are no safeguards and procedural guarantees against torture. Pakistan’s criminal justice system is like a vicious cycle. Poor criminal investigation leads to reliance on confessions which are usually coerced by use of torture, to get convictions, many of which are therefore false convictions and hence the real perpetrator gets away and eventually the crime rate is not controlled.

The only way forward therefore is that torture should be defined and criminalised by national legislation as soon as possible. Moreover the right to rehabilitation as per Article 14 of CAT must be implemented, which directs each State Party to,

Also, forensic staff should also be trained as per the guidelines of Istanbul Protocol which is a manual on the effective investigation and documentation of torture and other cruel, inhuman or degrading treatment or punishment.

Only these measures can increase the credibility of interrogation in Pakistan and in turn lead to reduced crime rates and most importantly protect the rights of the citizens especially against the use of arbitrary power, extra judicial killings and punishments, and ultimately strengthen the rule of law.