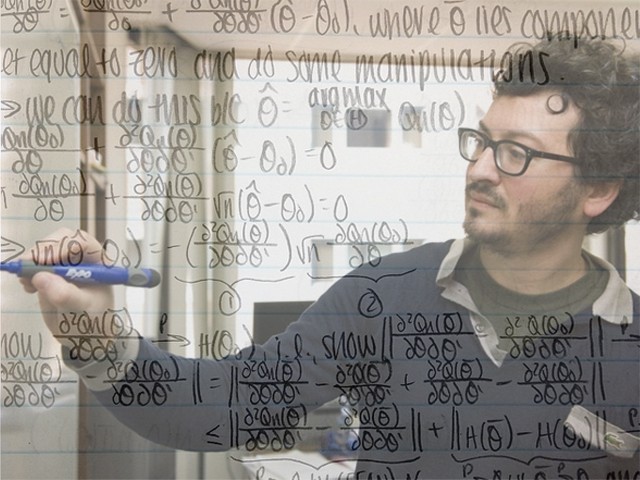 Guido Menzio, an economics professor at the University of Pennsylvania.

Things have been really tough for the Americans since 9/11. All those people in and out of the country speaking so many languages, and if you’ve never gone beyond your local 7/11, how on earth would you be able to tell this language from ‘that’ one. You know, the one that all terrorists speak; Arabic!

Which explains what happened to Guido Menzio.

Menzio took an American Airlines flight from somewhere to somewhere, right? And the intelligent woman next to him caught him writing something and how was she to know what it was? Acting on the principle, that anything that does not look like the ticker tape at the bottom of Fox News, she did the right thing and called the crew’s attention to his suspicious behaviour.

The flight was held up. The intelligent woman never returned. She wasn’t going to sit on any plane that carried people like him. That man was questioned as to who he was and what he was writing. They had to send the scribbles off to be tested and they came back positive for equations. Math. Well how was anyone to know? Math after all includes Al-Gebra, an Arabic word, just a hop away from codes and terrorism and all of that.

They had to let the man go. He was not even Arab, he was Italian. In fact, he was an Ivy League economist. But olive skin and curly hair. You know!

There is, therefore, a list being compiled as we speak of terms and things one should avoid when in the US, particularly when flying an American airline. It’s still in the making but here’s as far as it’s got for now:

Math: Well math of course. I mean you can say ‘Math!’ as many times as you like, ‘Math! Math! Math!’ They’ll put you down as a nutter – anyone would – but they won’t think you’re a jihadi. Not unless you wear a hijab. In which case, even if you ask for a peanut butter sandwich, the person in the seat next to yours will run shrieking off the plane. I mean who knows! But that’s beside the point. For now you must NOT – whatever you do – sit in your seat scribbling equations and stuff. Think of the curly haired economist, and desist!

Frieze: This may sound odd but hey, life is unexpected and this is just an example. It’s not as if you’re likely to see a frieze on the plane. A frieze is one of those decorative things you have on the front of a building. You may see one on a temple or perhaps in the travel section of an in-flight magazine. Well, if you do, you may find yourself unable to stop sharing the information with the person next to you. Because some friezes are just so very pretty that you can’t help sharing a frieze with someone. You know? One has these urges.

But whatever happens keep the frieze to yourself. Don’t share it! No matter how desperately you want to. It doesn’t matter how intelligent the person next to you looks. I mean, look what happened to the curly haired economist. So, it’s okay to read ‘frieze’ silently in your head as many times as you like, like ‘math’, ‘frieze, frieze, frieze’, but never ever point out a frieze to a fellow passenger. That would be like ‘Frieze!’ with a gun and all that! I mean Freeze! Yeah, that would do it.

Istinja: If you go in for that kind of stuff, please remember that one of the very, very few words that rhymes with Ninja is Istinja and we all know what Ninja means. Agents trained in martial arts and stealth that were great at espionage, sabotage and assassination. So it doesn’t matter, istinja or ninja, it’s all the same. If you ask the stewardess for the best place to ‘make’ istinja she’s not going to think of a turtle first, unless she’s under the age of 20. She’ll figure it’s you telling her who you are and then you may as well have to say ‘Frieze!’ and hold her up with a page of calculus.

Ziyad: If you have a son called ‘Ziyad’ please do not address him sternly in a loud voice. Think of a nickname and stick to it. Zadi, Zid Zid, anything but Ziyad which is too bloody close to ‘jihad’ and you know what that means. And while we’re here, also avoid talking about ‘milad’ and ‘Riyadh’ on your next flight. Too close. Too close. Sometimes people don’t hear very well. Or read. Or think. Really, it’s best to call all your kids Bill, Lucy, Bob or Hank.

That brings one to the last two words.

Al and Bin: Never ever say a name or anything that starts with an ‘Al’ or has a ‘Bin’ in it. ‘Al’ is the one word Arabs ALWAYS use. It helps pick them out. It’s like Al-Gebra again – the curly haired economist, don’t forget him. ‘Al’ is only okay if it’s rapidly followed by ‘gore’ because gore means blood. Blood and gore. So that’s someone American and that’s okay. But just ‘Al’? No!

The same goes for ‘Bin’. There’s a ‘Bin’ somewhere in every terrorist. Bin is just too ‘Laden’ with meaning. Stay away from it. On all American flights, ask for a trashcan. Ask for the garbage but ‘Bin’ is a bummer. Make that your mantra: Bin-is-a-Bummer. Only when you come to the bin part, keep your mouth shut and don’t say it out loud. Remember the curly haired economist!