Balochistan is far from “uncivilised” and these women prove just that! 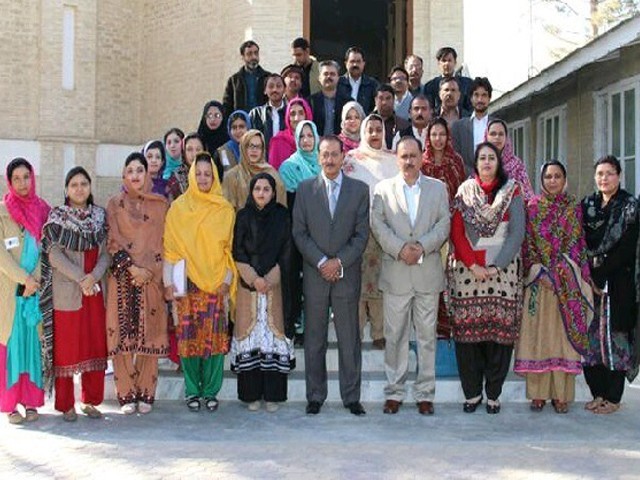 That Pakistan has a youth bulge is well known to most informed readers, but what the youth thinks about the myriad challenges faced by the country rarely gets space in the media, especially when it comes to females from minority communities. The First International Conference on Social Sciences recently held at Sardar Bahadur Khan Womens’ University in Quetta, Balochistan, provided me with an opportunity to learn just that.

SBK Womens’ University caters to around 6000 female students from all parts of Balochistan and offers up to MPhil and PhD degrees. In 2013, the university was attacked in a suicide bombing that took 14 precious lives. That it continues to thrive and has been able to multiply the number of students three folds since, is a testament of its students’ courage, commitment and resilience, attributes that were amply demonstrated during the course of this conference.

I was able to exchange views with a number of staff members, most of whom were themselves former students of the university, along with chairing a session on language and literature. The student presentations during the conference and the interactive discussions that followed, showed that the progressive thought is well and alive among the female youth in Balochistan. Students demonstrated incredible social and political awareness and were not shy to present critical thought and ask hard questions. Although a range of issues were discussed during 150 student presentations at the conference, I shall confine myself to the following key themes.

Given that the university has effectively become a sanctuary for those who wish to free themselves from the restraints that a patriarchal society places on women emancipation, each student had a tale to tell. Some confessed they do not wish to go home during vacations due to fear that they may not be allowed to return. Yet the students demonstrated remarkable understanding of cultural nuances and the ability to work their way towards a more equal, libertarian and just society. They demanded to be heard, acknowledged and accorded the same opportunities that their male counterparts take for granted. These included not just the educational, but also employment opportunities that are key to financial and thus social independence.

The students exhibited cognisance of the complex issues such as identity in the context of a multi-cultural, multi-ethnic society. They envisioned peaceful co-existence and acceptance of diversity as the key to co-habitation in a nation state. They themselves seemed an embodiment of this vision where students from various ethnic groups such as Baloch, Pakhtun, Brahui, Hazara as well as settlers and those belonging to various sectarian denominations gelled together effortlessly and presented a common front to adverse social attitudes. The emphasis was squarely on preserving the local languages, cultures and customs, and doing away with stereotypes that have firmly been established in some parts of the country. It did not go unnoticed that the Sociology text book in the country’s most populated province describes a particular ethnic group as ‘uncivilised’.

The centre-province relations, especially people’s right over natural resources in their area as well as the neglect of social development in Balochistan was also a persistent theme of discussions during various sessions. Students did not hesitate from questioning the role both local elite as well as powerful state institutions played in flaming violence and exploiting key resources. Resentment against lack of accountability, transparency as well as that of democratic representation was evident from various questions and comments made in the Q&A sessions. The students seemed eager to take on the baton of leadership from a generation that they thought had failed them.

The mention of the China-Pakistan Economic Corridor invoked mixed reaction from the students. While most acknowledged its potential significance for economic growth, many feared that the benefits will remain confined to powerful stakeholders outside their poverty stricken province. Furthermore, they remained uneasy about the prospect of a large influx of non-residents in the province potentially altering its ethnic makeup. Some were worried if they will be able to take up jobs in major infrastructure projects such as the Gwadar Port once it becomes operational.

Overwhelmingly pro-people sentiment among students’ perspective on most issues discussed during the conference provided a refreshing break from the dominant security centric narrative propagated on mainstream media about the province. The ability to debate, discuss and express through a variety of means ranging from sculptures to literature on display at the event would go a long way in challenging established social order. It was especially heartening to see confident, intelligent and informed female youth from Balochistan standing tall for their rights and shattering many stereotypes that are held about them in other parts of the country.

Yet, much remains desired in realising dreams that these young luminaries have in their eyes. For every girl studying at the university, many more remain uneducated, not because there is any dearth of quest for knowledge, but simply due to lack of adequate facilities in most parts of the province. For every girl employed at the university, many more remain unemployed, not due to any lack of enthusiasm towards work but due to lack of economic opportunities and hostile social attitude towards working women.

Events such as these are, however, instrumental in fostering the next generation of capable, democratic and indigenous leadership that is required to tackle the country’s ever growing list of problems. The conference aptly concluded with students performing a mime on popular number, Sadda… Haq, Aithay… Rakh!

The author is a political analyst associated with the Department of Politics and International Relations at University of Oxford. He tweets as @adnanrafiq