Bringing happiness to Peshawar, one box at a time 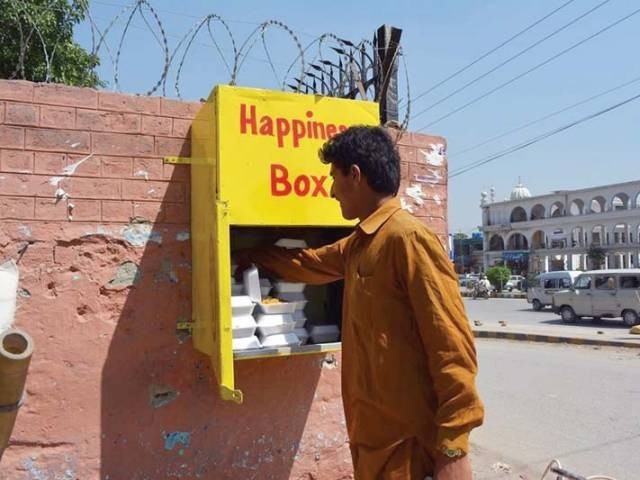 A box of happiness inscribed in a wall on University Road in the city. PHOTO: EXPRESS

Peshawar. If just the name of this city conjures images of bomb blasts, terrorism and political myopia in your head, know that you are not alone. For Peshawar, this ‘city of flowers’, a gem of a place with a historical past that only a few other cities can match up to – has been caught in the whirlwind of misfortune for quite some time now.

But I’ve duly noticed on my trips throughout the country that the people of Lahore and Peshawar have an endearing, almost fierce, sense of belonging and ownership for their cities. Accordingly, for every “Lahore, Lahore hai”, there’s a just as audible “Peshawar kho Peshawar day kana!” in the north.

So it’s only natural that the people of Peshawar would leave no stone unturned to revive the spirit of hospitality and warmth even in the face of extreme adversity. Peshawar was the first city in Pakistan to adopt the ‘Wall of Kindness’ idea from our neighbouring country, Iran. While this initiative caught on infectiously and these walls started springing up like wild-fire in many other cities; they have, sadly, already been abandoned in most cases. But Peshawar’s wall, I hear, is still up and functioning.

And there’s more. The city is making headlines again – and thankfully, for good reasons. The yellow box charmingly titled ‘Box of Happiness’ fixed against the Khyber Teaching Hospital on the upscale University Road had been highlighted. With a smiley painted in red, the box offers free food to all those in need. There are as many as a hundred boxes of pulao or biryani distributed twice a day, everyday.

It primarily caters to the labourers who are just too eager to claim their box of free food in a country with no real labour laws and a despicable minimum wage – in other words, it’s charity at its best. The initiative is the brain-child of students from the Institute of Management Sciences (IMSciences) – around five students have taken it upon themselves to ensure that the project remains sustainable. Those willing to aid in the effort will have to wait until the team decides it’s open for donations.

The response to the ‘Box of Happiness’ has been phenomenal to say the least. Not only is this a blessing in disguise for those in need of food, the project has also been hailed by many among the general population. And it will be remarkable to see others pick up on this idea, and start similar projects, keeping in mind the sustainability and practicality.

Obaidullah, who leads the project is also concerned about these issues and is open to alterations in the project as per the demands and convenience. The team definitely aims to take the boxes to different areas of the city, but the modus operandi of the project may see a change in the future owing to the circumstances. Talking to the Express Tribune about the mode of delivery of the food, Obaidullah replied,

“We will look into it after (receiving) feedback from them. Only then will we be able to distribute the food through a van or on a bike.”

“I felt so hopeless about this country, and then when I started meeting people here we got strength from each other”.

And it is initiatives like these that do not discriminate on any basis whatsoever and are emblematic of our common man’s resolve to help and make things better – this further keeps our hope alive. Boxes of happiness aren’t the solution to our problems of poverty and hunger, but are a very strong reminder of how one can change things for the better, or at least try. That is what makes us human. That is why efforts like these go a long way in defining the character of a nation.

So the next time you visit Peshawar and catch a glimpse of the conspicuous ‘Box of Happiness’, feel the pride in belonging to a lineage of people who know how to add to a city’s landscape – with projects that are far more important than obsessive fly-overs and high-rise malls. Thank you for taking the lead Peshawar, we hope we can follow you just as well!

On elaborating on the project, Obaidullah promised,

“The initiative will bring smiles on the faces of labourers.”

Something tells me it already has!