Quaid-e-Azam inter-provincial games: A light at the end of Pakistan’s barren sports tunnel 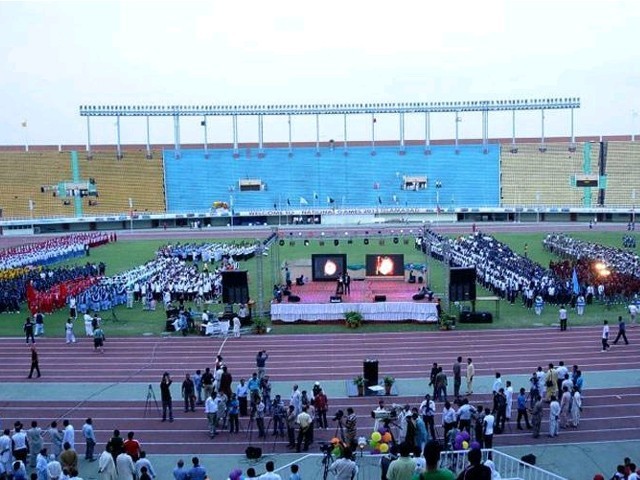 What is it about Lionel Messi that excites fans as he dribbles the ball across the field? What gives players like Roger Federer and Novak Djokovic the ability to hypnotise fans as they compete on the court? Is Usain Bolt’s speed really a big deal, after all, he did only run a 100-meter race at the Olympics.

It seems as though for the average Pakistani, everything that is remotely foreign seems to be infinitely more appealing, but does that really come as a surprise? Pakistan’s football team is ranked 190th in the world, we are still raving about Aisamul Haq’s success in the Davis Cup while Nasim Hameed who won the gold medal for a 100-meter race in the South Asian Games 2010, is barely known.

I was rather amused when I looked through Pakistan’s track record at the Olympic games. We have won a total of three gold medals from 1948 to 1992, after which we have been unsuccessful in our attempts. While some say silver and bronze medals mean something, I, like most others, am uninterested in them as they don’t really signify an achievement.

It was always safe to put all our expectations on the cricket team, but these days doing so is nothing short of living in a fool’s paradise. Looking at the athletic aspect of the country, our athletes are unable to qualify for the Olympic games let alone standing a chance of actually coming home with a gold medal. Should Pakistani’s just give up on sports and athletics?

I don’t want to sound disappointed and while this may seem like yet another article bashing some aspect of Pakistan, it is in fact quite the opposite.

Today, the high achieving sportspeople of Pakistan, which include players like Aisamul Haq, Samina Baig, Palwasha Bashir, Hajra Khan and Nasim Hameed, are deeply concerned about the future of sports in the country. These individuals have faced all the complexities of a budding athlete/sportsperson head on and overcome each hurdle coming out victorious.

There is no question that the process of rebuilding and strengthening our nation’s sporting sector would be gradual and there are many basic steps that need to be taken before making any bold changes. For starters, Pakistan’s sports ministry has to build a proper platform for individuals, and it has to be understood that talent will not just present itself in front of the selectors; it has to be hunted down, even it means going door-to-door, and better coaching staff who are assisted by professional sports personalities are needed. Being a sport journalist myself, I was always overly critical of our ability to achieve anything in the sport/athletic sector. Most people I spoke to regarding the changes needed and the road to them had the same reservations and concerns as I did. Little did I know that witnessing the first Quaid-e-Azam Inter-provincial Games held in 2016, would completely change my perspective. While it may sound like just another competition with mediocre talent, believe me, it was unlike any other sports event I had seen in Pakistan. This felt like the light at the end of the tunnel, as their may still be hope for the youth in Pakistan.

The games were held at the Pakistan Sports Complex in Islamabad from April 23-26, 2016. On the day of the opening ceremony, I was informed that there were going to be over 3000 participants and that all of them had been handpicked by the selectors of the eight participating contingents.

In Pakistan, mature players tend to overshadow the sports fraternity, while young talents wait their turn. However, this competition allowed the younger players to flaunt their talents. All the players were under the age of 25, as per the Pakistan Sports Board’s official rules for their tournament. What was most surprising was that just like the young talent, the smaller provinces were also getting a chance to showcase the very best from their respective regions. The participating provinces were Sindh, Punjab, Balochistan, Islamabad, Khyber-Pakhtunkhwa (K-P), Gilgit Baltistan, FATA and Azad Jammu and Kashmir. At the inauguration ceremony, the stadium seemed to be at full-capacity, filled with people from all over Pakistan supporting players from their provinces. The ceremony began and the most anticipated events were the march-past and the torch ceremony at the Jinnah Stadium in the Sports Complex. As the celebrations were ongoing, I began reading the informational handout which to my surprise, stated that the Pakistan Sports Board planned on using the competition as a platform to exhibit the participants talents in athletics, basketball, judo, badminton, hockey, boxing, wrestling, tennis, squash, taekwondo, karate, table tennis, football and volleyball over the next three days.

After the enchanting opening ceremony, the games finally began. While the beginning of the event was rather haphazard and confusing, the Pakistan Sports Board’s efforts must be appreciated which proves that the board has the potential to host and organise a sporting event at the international level.

Dr Akhtar Nawaz Ganjera, the Director General of the Pakistan Sports Board said,

“This is the first a tournament of its kind is taking place in Pakistan and we took the initiative because we are aiming to host South Asian Games, Common Wealth Games and Olympics in Pakistan. We will show the entire world that Pakistan is not beneath any other country when sports in concerned. My entire team is working to introduce the best athletes of Pakistan through this platform and the world will see the talent from here …”

If all the statements made by the PSB were to be quoted, the event would look just another gimmick being pulled off, which was my impression of it until I actually witnessed the magnificence of the event myself. The participants, most of who came from a poverty stricken background, traveled from all over Pakistan just for these three days. Close to a 1000 of the participants were young girls who had fought their families to chase their dreams of being sportswomen in a sport other than cricket. All the athletes were committed to their tasks and worked hard to excel at their chosen sport. They would practice for four to five hours every day while the ones participating in the 100 and 200 meter races would practice for seven to eight hours. These youngsters did not pay heed to the dehydration their bodies were suffering from, nor did they care about all the sleepless nights they had endured. Every participant had a fire in their heart and determination in their eyes; they were all raring to go.

It was inspirational to see the athletes only concerned about practicing more and more to beat their opponents, even though the sports complex grounds were damaged, the rooms were not renovated prior to the event, the washrooms were never clean and there was a lack of restrooms for the athletes. And despite all the shortcomings of the PSB, the athletes went above and beyond to prove that Pakistan’s sports talent is not just limited to cricket. The stamina, patience, passion, athleticism and momentum of each athlete were unmatched.

On the last day, during the closing ceremony, the winners were announced and Abdul Moeed was seen imitating DJ Bravo’s moves in Champion Champion after winning two gold medals for the men’s 100 and 200 meter races and Batool Zehra was seen proudly showing off her gold medals to the relatives who tried to talk her out of her dream of being a sportswoman, countless times, because as per their beliefs, she is meant to get married and look after her house and family– roles that are allotted to girls when they are born.

After the teary-eyed celebrations, Pakistan’s Finance Minister, Mr Ishaq Dar, announced a donation of Rs100 million to the PSB for the complete maintenance and overhauling of the sports complex. It is great that the next games will be held in a better atmosphere with improved equipment and facilities. Perhaps, someday the Pakistan Sports Complex will be the venue for the Olympic games. I would like to congratulate Punjab, K-P and Sindh securing first, second and third positions, respectively. I also want to wish the very best to all the athletes who worked tirelessly to lead their contingents to victory. Just like the provinces are proud of their respective participants, one day the entire nation will be proud of these individuals as they break previous records in the Olympics, the Common Wealth Games, the South Asian Games among many others.

It is time we stopped criticising the PSB’s management and instead join hands with them in their mission to make Pakistan a country of champions.