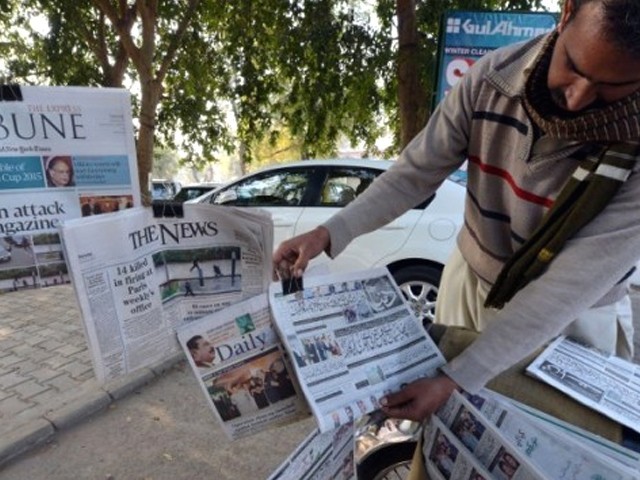 A Pakistani vendor arranges morning newspapers with front-page-coverage of the attack by gunmen on French satirical weekly Charlie Hebdo in Paris, at a roadside newsstand in Islamabad. PHOTO: AFP

You know, therefore you are.

And we know because of the press. Be it print or broadcast, media is what keeps you updated. It provides us with information because it is our right to know, and it is the press’ right to relay that information.

The press, or a more relevant term today might be the media (that includes products of both print as well as broadcast and digital journalism) relay that information to you.

The Pakistani media is far from perfect.

The headlines can be scandalous and out of context. The reporters and TV anchors cross lines. Media ethics are ripped apart every time a tragedy takes place, where cameras are thrust in the faces of victims and survivors. Information is relayed first and thought about later.

While print media (newspapers), exercises much more care and caution compared to TV, the web wing of newspapers is another animal altogether. News has to be broken within minutes otherwise it becomes redundant and stale. “It’s already been covered” is the worst nightmare in the web room. To make their story novel and different, value additions are pushed through and the ‘treatment’ of the story is altered to get more hits.

Journalists are paid a pittance, especially if they are in print media, and those that write in a local language are paid even less. The one thrill that keeps them going is the sheer joy of being able to tell a story or create awareness while taking the credit for it; their name or face appearing with the news story. And for this, they risk their lives.

With every passing day, our viewers, readers and listeners are also becoming less forgiving. A decade ago, we could have gotten away with shoddy and loud journalism by saying,

(Our media is enjoying its new found freedom).

But Pakistan’s media has now crossed the milestone of being nascent.

The initial euphoria of freedom after an era of being the proverbial “press in chains” has now begun to die down. Which means the media will not be able to get away with anything and everything. Also, mistakes made by the media, like everyone else, can become a social media trend within minutes. Whether the media person was right or wrong, how they should be dealt with is another debate.

But if media persons ask politician’s scandalous questions, storm into assemblies, do moral policing of dating couples in parks, or show unreasonable tilts towards an ideology or person, they cannot go scot-free. Writers and reporters should not be allowed to base entire stories on hypothetical sources and should not be allowed to share data without citations. Today’s media is grilled and criticised. If nothing else, the social media trial will take them to task.

The absence of a check and balance corrupts anyone in a position of power, and one of the most powerful positions to be in is as a media person. What we say, show or write reaches millions. We, the media, are answerable.

Yet, as the world today celebrates the 250th Press Freedom Day, is Pakistani media really free?

What we know as ‘policy matters’ and ‘security concerns’ often hold back the pen or the microphone of the reporter to relay information that must reach the public. Certain ideas are shot down by editors due to fear of backlash and ruffling too many feathers, and then we wonder why our best journalists end up writing for foreign publications and not local ones.

Fears of consequences, tilts and allegiances of patrons, the editor’s discretionary powers to chop or discard a good pitch or story and the simple fear of becoming unpopular or redundant, often hold a journalist back from the noble task of telling the truth, and nothing but the truth.

The reporters in a press conference can and should be trained to ask better phrased and more relevant questions, but do they have the right to put those questions to a Pervez Rasheed, an Imran Khan, a Prime Minister Nawaz Sharif or a General Raheel Sharif?

The answer should be a resounding yes.

In a world where surveillance of citizens is legally accepted, why should a media person’s right to ask questions be curtailed?

While absolutism in freedom of speech can be harmful, strict censorships harm a society by not only restricting, but mutating the development of healthy collective thought processes.

The annual report of press freedom by media watchdog Reporters Without Borders (RSF) stated that Pakistan has been ranked 159 out of 180 countries. Yet, these restrictions are not just limited to Pakistan as the world at large is failing on many counts when it comes to providing press the required freedom.

In an era plagued with conflict, fear of life is what causes us, the media persons, to bite our tongues and throw away our pens.

The need of the day is to educate our press and media persons regarding media ethics, but at the same time, their safety should be safeguarded while ensuring that they can speak up without fear of losing their audience, their jobs or their lives.