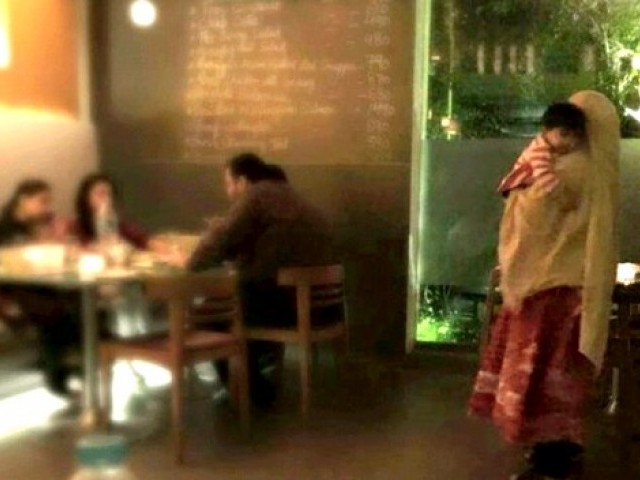 If one is seen accompanied by their domestic staff in a public setting, it’s common practice for them to end up being secretly photographed; the picture being shared all over social networking websites. All this accomplishes is violating someone’s right to privacy, and starting internet wars over the picture, the discussion soon becoming personal, dirty and irrelevant.

Amidst all the personal attacks and battles of egos – socio-economic issues are ignored. Be it a tweet, blog article, or a Facebook post, instead of indulging in a civilised discussion where one can work towards finding sustainable and practical solutions, people find reasons to launch personal attacks at one other.

In order to find a solution, we need to identify the problem. The main problem isn’t that domestic workers accompany their employers to restaurants and/or shopping malls.

It is only part of the problem.

A great majority of the people who employ domestic workers believe that they have been ‘purchased’ and not hired. In other words, they are not employees, but slaves. This kind of mindset is a major problem considering we don’t identify them as employees in the same way as many of us are employed at our work places. As an employee, all of us have certain rights and benefits that we get in return for our services.

Pakistan has the third largest children’s workforce in the world, according to the International Labour Organisation (ILO). So, if you feel for the child that looks with longing eyes as his employer enjoys a feast, then host a campaign in favour of eradicating child labour in Pakistan.

If you feel for the man who stands with multiple shopping bags as his employer splurges at expensive shops, then campaign for the 52.6 million domestic workers in Pakistan, and their right to dignity and fair employment.

The point that I’m trying to make is that instead of criticising, find ways to change the status quo. If the society is unaware of the injustices, then make them aware. Freire puts it eloquently in the following words:

“To affirm that men and women are persons and as persons should be free, and yet to do nothing tangible to make this affirmation a reality, is a farce.”

1. The absence of a formal employment contract disables a domestic worker from having any concrete rights, including being paid for overtime and/or legal mechanisms to protect them from sexual harassment and abuse.

4. Domestic workers are included in the category of workers protected under Minimum Wage Act 1961. The Sindh Assembly has also passed a law, the Sindh Minimum Wages Bill, 2015, to regulate the minimum wage of unskilled workers in the province and has set the minimum wage for 2015-2016 at Rs13,000 per month in Sindh.

5. Under section 55-A of Punjab Provincial Employees Social Security Ordinance, 1965, “every employer of a domestic servant shall be liable to provide [medical treatment] at his own cost”.

6. ILO provides guidance regarding the rights of domestic workers in the form of ILO Domestic Workers Convention, 2011 (No 189). Pakistan has not yet ratified this convention, although there is international and national pressure to ratify. Some of the key articles of this convention are as follows:

– All domestic workers should have the right to association.

– Regulation of a minimum wage, as well as age of domestic workers.

– Safety against all forms of abuse and/or harassment.

– Decent working conditions as well as a healthy and safe working environment.

– Full disclosure of their rights and duties at the start of employment and, if possible, in the form of a written contract.

– Above all, provision and protection of social security and fundamental human rights.

Now that we know enough, let’s start educating others!