My teacher told me that if I didn’t cover my hair, Satan would urinate in it 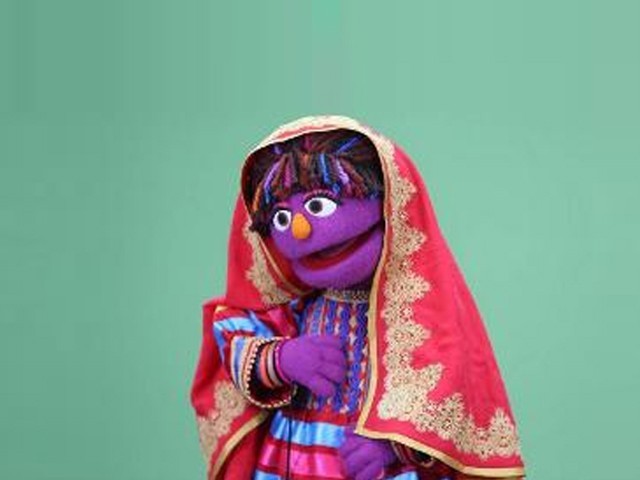 I have always loved Sesame Street. It was the only children’s show, along with Fraggle Rock, that I eagerly watched as a little girl while growing up in Saudi Arabia. I especially love how culturally diverse the show is and how, through multicultural elements, it aims to teach young children the value of mutual acceptance and cross-cultural friendships. In a nutshell, the show is perfect in all aspects of what a children’s show is supposed to entail.

So, it did not come as a surprise to me when I learned last week, through an Instagram photo a friend had tagged me in, that Sesame Street had recently introduced a new Muppet: a rambunctious six-year-old Afghan girl named Zari.

As a Pakhtun/Afghan myself, nothing could have made me happier than to see this adorable little girl puppet wearing traditional Afghan clothes, and representing a beautiful culture that is often trounced by the patriarchy and oppression that exists in that country.

And, for a brief moment, I felt hopeful – hopeful that the world was finally going to get a glimpse of the beauty of Afghan culture, even if it had to be through a children’s show. While I realise Zari’s presence would be limited to the Afghan version of Sesame Street known as ‘Baghch-e-Simsim’, the fact is that Zari is supposed to represent a girl who has gone against the norm and challenged the obstacles that patriarchy has enforced upon women and girls in Afghanistan, i.e. access to education, fitness, sports and, most importantly, the freedom to live freely. She is the epitome of everything that defines what empowerment is and should be about.

Well, that is, until I came across a picture of her wearing the headscarf. Whatever little hope I had was soon replaced with disappointment and frustration. And I couldn’t help thinking about the majority of young girls in Afghanistan who are forced to cover their hair – girls as young as two or three-years-old.

Nushin Arbabzadah, who was raised in Afghanistan and bore witness to the violence and oppression imposed on women and girls during the Soviet-Afghan War, says in her honest and deeply moving piece,

“In my life, headscarves have been symbols of oppression, not solidarity.

Five years ago, I returned to my school in Kabul. Headscarves now covered the hair of even three-year-olds in kindergarten. But it hadn’t stopped the violence. Outside the school, the holy warriors were now doing suicide bombings. By this time, though, I had stepped outside the mujahedin’s moral circle. I had learned that societies can be peaceful and prosperous when even women reveal their hair. This time, I only covered my hair to protect myself from violence. But under my imposed hijab, I knew that our hair had been innocent all along.”

Although I realise that the headscarf may be a ‘choice’ for some women, the fact of the matter is that, for a vast majority of women and girls, it is not; especially in countries like Afghanistan and Saudi Arabia. I know this, because I, too, have lived it.

When I was 11-years-old, attending an all-girls school in Saudi Arabia, I was once told by one of my teachers that if I did not cover my hair, she would fail me. At the time, I couldn’t truly comprehend why she was being so harsh with me when I was only a child. To make matters worse, that same teacher later pulled me aside, and told me that if I ever uncovered my hair again, the shaitaan (or Satan) will urinate in my hair. Needless to say, I was truly and utterly terrified. In fact, I was so terrified that for the longest time I even went to bed with my headscarf on. Can you imagine how scary and traumatising it is having to instil this sort of fear in the minds of young girls, just so that they would cover their hair?

I know many would argue that Zari only wears the headscarf in some pictures and segments of the children’s show, and that it is loosely tied  around her neck so that a part of her hair is visible, which is less stricter in comparison to the other modes of head-covering required of women living in that part of the world.

It is loosely tied around her neck so that a part of her hair is visible.
Photo: Reuters

“It is important that Zari look and act like an ‘everyday’ Afghan pre-schooler and reflect the customs of the country. She has a variety of clothing options so that she is always appropriately attired. She wears a hijab (headscarf) as part of her school uniform as well as on special occasions with more traditional outfits. But as a young girl, there are times when it is suitable for her to be without it,” said Jeanne Finestone, program director for Lapis Communications – the Afghan partner of the Sesame Street Workshop.

I do recognise that the creators of the endearing puppet had good intentions and have attempted to create a character that is both culturally authentic and appealing to young girls, thus reflecting the real life situations of today’s pre-schoolers in Afghanistan. But, that is not the point. The point isn’t that the puppet, who is supposed to empower and inspire little girls, wears the headscarf occasionally or that her physical appearance is supposed to be representative of little girls in Afghanistan. The point is that she is supposed to be a child, and children should not have to cover their heads regardless of representation.

It then completely defeats the purpose of what it means to be empowered, for, little girls covering their heads at only six-years of age is not, and should never be seen, as a symbol of girl’s empowerment. As, nothing – absolutely nothing at all – could be more disempowering than a piece of cloth that was born and bred out of patriarchy.

This observation about the headscarf-wearing Zari was also brought up by Fariba Nawa – a prominent Afghan-American Journalist. Nawa makes the assertion that Zari will soon become a role model for young Afghan girls, and even though the puppet appears to have several different outfits on the show, in which on some occasions she doesn’t wear the headscarf at all, it is imperative that these girls understand what the headscarf means, and that it is not mandatory. She further goes on to give an example of her own young daughters who, upon watching the show, would inevitably wonder why a six-year-old girl is covering her hair in some segments. And it will be difficult – very difficult, in fact – having to explain to a child what the headscarf really means, and how so many young girls in Afghanistan have come about wearing them.

As a mother of an almost three-year-old, I, too, echo Nawa’s concerns, and I know there will come a day when my daughter will ask me about the headscarf and why some women wear it. As a parent, I would have to be as honest as I can be, and explain to her that the meaning behind the headscarf isn’t exactly one of empowerment, considering how it has been saturated with sexualisation and objectification of women and girls in the Islamic society. The simple reason is this: women and girls must cover, because they are too ‘alluring,’ and men – the ‘sexual beasts’ that they are – obviously cannot control their lusts nor divert their gazes, as required of them in the Holy Quran.

Here I would also mention that head-covering isn’t even transparently mentioned in the Holy Quran; there are no specific verses that clearly state that a woman must cover her hair. There is only one interpretation of the Holy Quran that requires it, and even that is highly debatable.

The headscarf has become a symbol of oppression in Afghanistan, and it’s time we accepted this reality, rather than make excuses for it or simply brush it aside. For most, the headscarf is anything but a choice. As a matter of fact, it is known that the premise behind wearing the headscarf is to teach young girls, at a very young age, that they are shameful and alluring. It is to remind them that they are sexual beings, resorting them to nothing more than pieces of flesh simply to be possessed and controlled by the men who have imposed the headscarf on them.

Despite what our beliefs are, and whether we as adults choose or do not choose to wear the headscarf, the reality is that young girls wouldn’t choose to cover their hair willingly. I certainly didn’t want to cover when I was a child growing up in Saudi Arabia. But, since it was imposed on me, time and time again, I had no choice but to wear it. As a matter of fact, I was practically even blackmailed and manipulated into wearing it. Choice was never an option.

However, this is not to imply that the idea of Zari is not brilliant, it certainly is. I love Zari and I do genuinely believe that she will serve as an excellent role model for young girls in Afghanistan. My only humble suggestion to the creators of the character is this: let children be children, and lose the headscarf.

Clearly it wasn’t Zari’s ‘choice’ to wear it in the first place anyway.