The long road home: A journey from Chitral to Islamabad 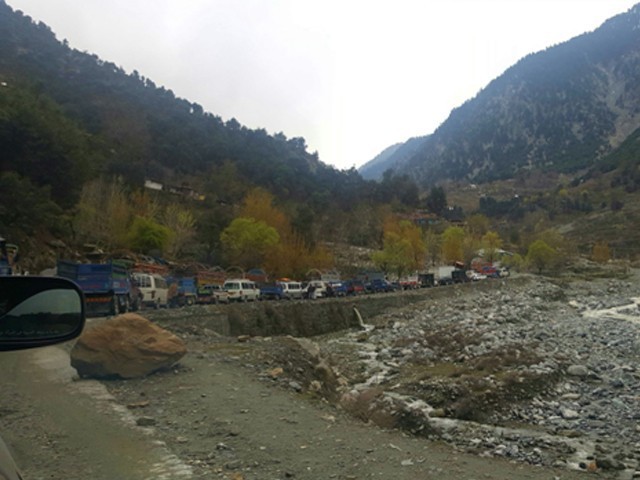 Before us is sheer rock, an expanse as high as the eye can see, streaked with piles of dirty snow and excavated rubble. And passing through the belly of this rock, like a feat of laparoscopic surgery, is the Lowari Tunnel. PHOTO: FRIDA KHAN

It’s a journey that gives perspective to your life. The endlessness of the Qaqlasht mountain meadows, the sky and the snow-capped peaks make you feel very small. The story of Qurban, an illiterate lady in the village of Booni – who runs three shops and supports the education of her nieces and nephews despite having been threatened by an acid attack, makes you realise how quotidian your own challenges are.

And the cancellation of the flight to Islamabad with the prospect of being stranded in a dark, brown, tube-lit, hotel room in Chitral – beautiful though the town is – makes you realise how much you want to go home. 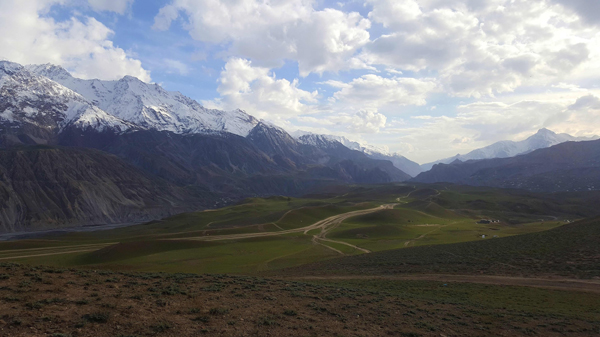 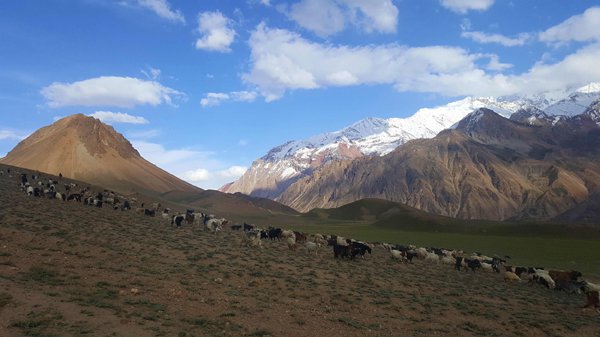 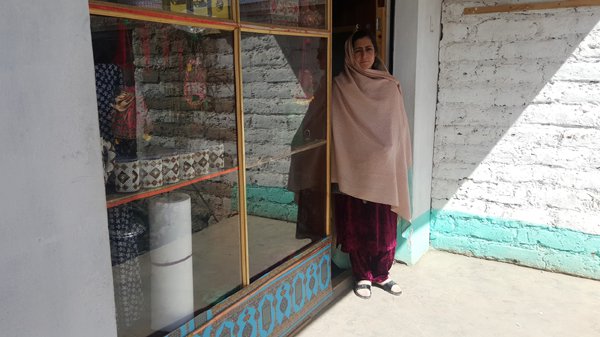 Qurban, an illiterate woman living in the village of Booni.

And the only way to get home without having to wait another five days for the next chance is by road through the Lowari Tunnel, high in the Hindukush mountains. The tunnel is still being constructed and, when completed, it will provide the only all-weather land route out of Chitral. Until then, it opens in its unfinished state two days a week, for only two hours each day. 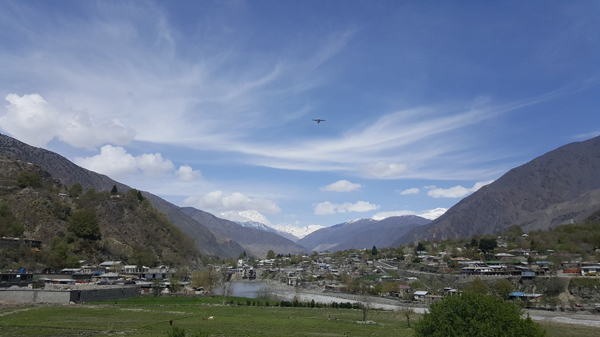 So, my daughter and I rent a car and we are off with our driver, Shamsuddin. The route is a stunning one. Green valleys flow out from between cloud-clad, rock mountains, widening and coming to rest alongside the muddy river. The season has just started changing so the trees are still a shy green and apricot blossoms blush under the spring sun. The mountains are grand, towering above, their jagged ridges testament to the geological forces that ripped them apart millions of years ago and the more recent man-made ones that tore through them to carve out this winding, rocky, ribbon of a road that we are on. 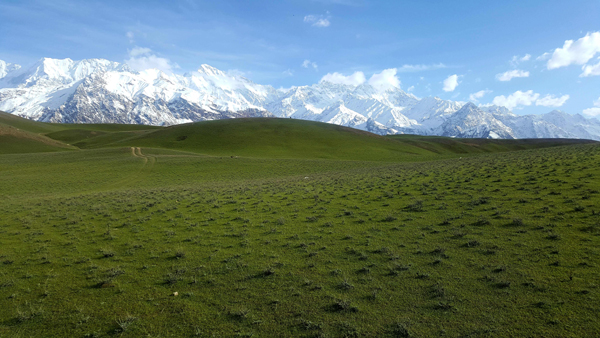 The beauty that surrounded us. 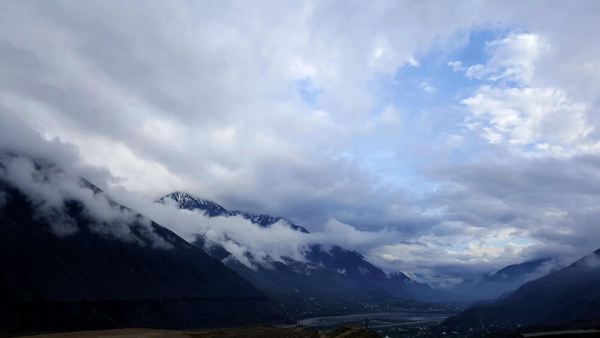 In places, the melting snow turns into torrents that inundate the road. And though the road easily becomes a river, our car, sadly, does not become a boat. So Shamsuddin, much to his consternation, has to slow down and splash and slip and scrape his way through. In some places the driver finds to his horror that there is a car in front of us. And so he must overtake it at any of the many blind, hair-pin turns along the way. All of this makes for a harrowing journey, but one that Shamsuddin manages with great skill, adroitly navigating the bends and bumps with his left hand on the wheel and the right on his mobile phone taking calls and making them, receiving messages and replying to them.

I am tempted to tell him off, stop him from using his phone while drives. He might be ambidextrous but I am sure he isn’t ambi-ocular. But, I hesitate to say anything. He is young, has a long, black beard and wears a prayer cap constantly. He has already told me that he comes from a long line of village maulvis. And, he has just described a car accident to his friend on the phone, claiming that it’s probably a consequence of the driver neglecting to say his Friday prayers. Therefore, I don’t think he would take kindly to a woman, especially one with an immodestly uncovered head travelling alone with her daughter, challenging his expertise. I think of how I could frame the request in a way palatable to him.

(Without a doubt, life and death are in the hands of Allah and He alone has seen the future, but if you could keep both of your hands on the steering wheel and your sight on the road, the grace of God will be upon us).

And even as I reconsider the statement, I am aware that I am pandering to the worst of stereotypes, both in terms of how I imagine he has judged me and how I am judging him. But before I can approach the issue, we are stopped at a police check post.

I roll down my window. The policeman looks inside and then asks the driver,

“Are they foreigners or Pakistanis?”

“Show me their ID cards.”

I hand them over.

“What were you doing here?” he asks me.

“I came on holiday with my daughter.”

He looks doubtful. “On holiday? Daughter?”

“I came with,” I say, helpfully completing his sentence.

He looks at the ID cards again.

“Frida Khan. Aisha Memon,” he feels he is on to something. He throws me a challenging look.

“The surnames are different.”

I point to my card, where it says ‘Husband’s name’.  I read it out, “Abdul Qadir Memon.”

Satisfied, the policeman hands our ID cards back to us. In that instant, a grudge that I had carried against a certain NADRA official who, eighteen years ago, replaced my father’s name with my husband’s on my ID card, completely vanishes. 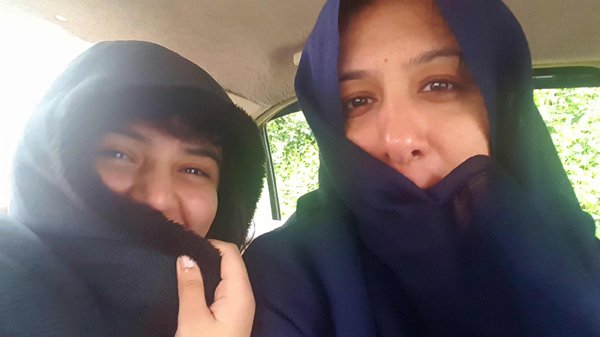 My daughter and I trying to blend in after being called foreigners.

“You can go. Aisha can go. But not him,” he said, pointing to Hassan standing next to me, about as tall as my knee, holding my hand.

“Because his name is on the Exit Control List.”

I bent down and looked Hassan in the eye. “Have you been a naughty boy again, Hassan?”

And with that solemn assurance he was waved through, exactly as we are today.

We join a long line of vehicles threaded along the mountain track, waiting for Lowari Tunnel to open. The tunnel will open for traffic from one side, then close, open for the other side, and then close again for three days. There are buses and passenger vans, pick-ups and lorries, jeeps and cars. Some of them have been parked from the night before to ensure they get a spot in the queue to make it through before the tunnel closes for the day.

The buses and cars are full of people going to Peshawar and Islamabad for work, to buy business supplies, to meet friends and family, go to hospitals, join university, or take a holiday. The lorries and pick-ups are empty, except for a load of sand in the back. Our driver explains that the sand is to weigh them down and give them stability so that they can make the climb up the mountain to the tunnel. Five days later, when they come back, they will be loaded with groceries and household goods, cooking oil, gas cylinders, cement and flour. Once unloaded, they will repeat this treacherous journey.

Twice a week, every week. And sometimes, all their life. 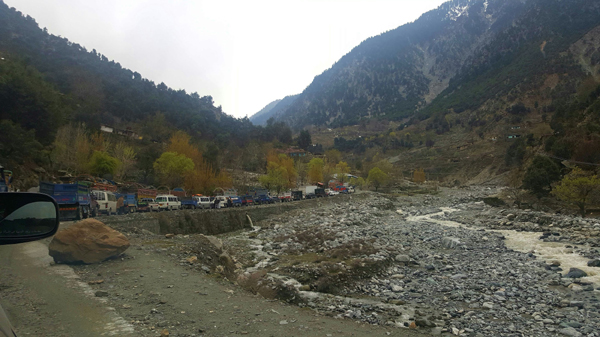 The queue for Lowari Tunnel begins from several kilometres away.

In the summer, Lowari Top (the passage over the top of the Hindukush mountains) will also open which will help disperse the traffic. I ask Shamsuddin how much higher Lowari Top is than the tunnel.

He replies with the swiftness and confidence of one that has made each of those turns many times.

Even though the trip to the top adds a few hours to the journey, he says he prefers it over the tunnel.

As we approach the tunnel I begin to understand why. We have left the trees and fields far behind. Before us is sheer rock, an expanse as high as the eye can see, streaked with piles of dirty snow and excavated rubble. Passing through the belly of this rock, like a feat of laproscopic surgery, is the Lowari Tunnel. We can see the colourful line of vehicles stretched out before us, each one pausing at yet another check post to register its number and driver’s name, before being passed through one by one like beads on a rosary, pregnant with prayer, as they enter the tunnel. 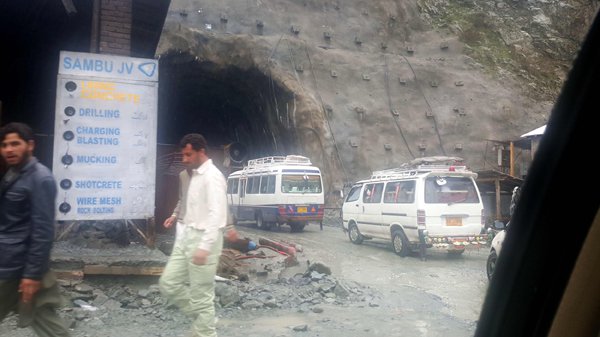 Lowari Tunnel is 10,000 feet above sea level, just 230 feet below the summit, 8.5 kilometres long, unpaved, unfinished, dark, claustrophobic, water dripping from above and pooling in the potholes. Once you are in, you have no choice but to keep going forward. As the vehicles pass through, the space quickly fogs up with fumes and dust, and there are points when we only have the hazy taillights of the car in front to guide us. In some places there is the odd, yellow bulb that casts a sulphurous glow on the surroundings, lighting up construction machines and material strewn along the side. In most places there is only darkness. 25 minutes later, when we emerge into the light on the other side, we truly feel we have travelled the bowels of the earth.

The relief Shamsuddin feels is palpable. Riding an undercurrent of joy and the force of gravity, our driver careens down the mountain, swerving around the turns with a velocity that I am sure leaves us airborne a few seconds before we touch ground again. The rocky snow peaks give way to green mountains with houses and crops embroidered into their terraced edges. They in turn, gradually soften to form the forested mountains of Malakand, which give way to the dusty hills of Takht Bhai.

We pass through a series of bazaars, including Batkhela, said to be the longest bazaar in Asia without any traffic lights or intersections cutting across it. It is a two kilometre stretch of open-fronted, concrete-box shops displaying their wares – woollens, toilet fittings, strings of shampoo sachets, hosepipes, plastic toys – hanging listlessly from the ceilings and walls, dulled by dust and my tired eyes. The road through the bazaar is a chaotic tangle of cars, bikes, Lorries and men. In fact, throughout the whole journey, I have only seen three women on the road; two in a bus waiting to go through Lowari Tunnel, and one here, looking into a shop.

We inch through in stops and spurts.

Finally, 11 hours after we had begun our journey, we turn from Rashakai onto the motorway to Islamabad, and it already feels like home. Even though we are still an hour and a half away, I feel the same joy and anticipation as I do when I turn into my street on a Friday after work.

Shamsuddin gets a phone call. Someone is persuading him to take up a job that involves going to Lahore to pick someone up, bring him back to Islamabad, and then a few days later take him to Chitral.

“Nah, yaar,” he says dismissing the offer. “You expect me to spend five days in Islamabad? No. I want to go home.”

Shamsuddin and I – our lives could not be more different. But what’s important in them is exactly the same.

The author is a development sector professional with more than 20 years experience working for the Government of Pakistan and the United Nations. She enjoys travelling, reading, writing and music. She tweets as @FridaKhan (twitter.com/fridakhan)