Will WhatsApping the Rangers help restore security in Karachi? 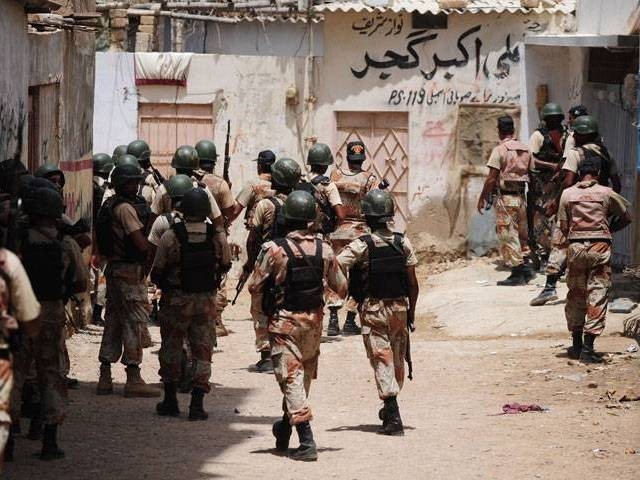 Citizens can now, within the safe confines of their homes, send a text or audio/video message to the paramilitary force via WhatsApp to the ‘Rangers Madadgar’ number and have the law enforcers arrive at their doorstep. Pakistan Rangers, Sindh have asked citizens to inform them about any unlawful activity, especially extortion, on their WhatsApp number 0316-2369996 or send an email to [email protected]

The Pakistan Army has been carrying out much needed action against terrorists in a coordinated and systematic manner since General Raheel Sharif took charge. Instead of going for an all-out clean-up operation against criminal elements, the Army higher-ups have taken a cautious approach (keeping the aftermath of the 1992 military operation in mind), taking every step with great care.

This time around, there seems to be a genuine effort by the Sindh Rangers in order to establish a connection between the armed forces and the citizens of Karachi. Karachiites can now send a text or audio/video message to the Rangers via WhatsApp to the ‘Rangers Madadgar’ number and have the law enforcers arrive at their doorstep. And all this can be done within the safe confines of their homes. Pakistan Rangers, Sindh, have asked citizens to inform them about any unlawful activity, especially extortion, on their WhatsApp number 0316-2369996 or send an email to [email protected].

This reflects the willingness of the federally controlled law enforcement agency to eliminate crimes from the port city. It is obvious they are employing various methods to identify all individuals/groups involved in crime.

Previously, it was an uphill task to get a complaint registered with the concerned police station, but this initiative should fill the vacuum that existed due to a lack of public trust in the Sindh Police and its reluctance in reporting crime for various reasons.

WhatsApp is a chat client being used by people all over the world and is not restricted to the privileged class. With the advent of cheap Chinese phones and data packages offered by cellular companies, the reach has expanded all the way to the common man on the street. Within a matter of few seconds, a picture can be captured or a video can be recorded and sent to a number via WhatsApp. Citizens, who were sceptical about this initiative earlier, will now be able to alert the authorities in time without disclosing their identity or without having to visit a police station.

The recent achievements of Sindh Rangers in restoring peace in the metropolis and the overall progress in the on-going operation Zarb-e-Azb at a national level has strengthened public confidence in the armed forces. It’s safe to say the common man would feel safer approaching an army officer rather than visiting a department of the Sindh government. This speaks volumes of the distrust that exists due to corrupt practices and the glaring incompetence of the Pakistan People’s Party (PPP) led Sindh government.

The DG Rangers (Sindh) recently announced a fund to assist victims of terror, which again is a commendable step towards the restoration of public confidence in the abilities of the law enforcement agencies. Fortunately, the armed forces of Pakistan have successfully tapped into the long neglected “community involvement” aspect and are now moving ahead in a coordinated manner. For the first time, paramilitary forces are illustrating a humane approach towards carrying out a cleansing drive in a heavily urbanised setup.

What’s left now is the outcome of this initiative. Extortion, kidnappings and similar organised crimes have decreased over a period of time, but scattered incidences are reported from time to time. Street crime is another sector that is awaiting attention of Sindh Rangers. In the past, public complains were barely paid heed to, even when reported to 1101.

For this initiative to be successful, Karachiites will have to play an active role as well. Equipped with smart phones, there will be a massive force of informers ready to contribute towards eliminating crime by reporting crime via WhatsApp – only if they witness quick action against criminals on their reported incidence. Citizens will have to avoid any misuse/exploitation of the service and report only authentic and genuine cases for this Public-Rangers partnership to succeed and help Karachi regain her lost glory.