The Huntsman: Winter’s War – A grim tale rather than a Grimm’s Fairy Tale 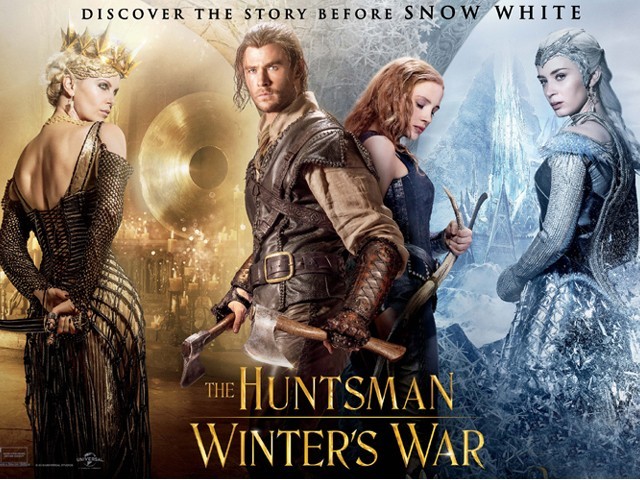 “Mirror mirror on the wall,

Who is the lousiest of them all?”

Once upon a time, in a land of pointless sequels, lousy executives from Universal Studios thought it was a good idea to make a franchise out of the 2012 sorta-kinda-maybe-a-hit Snow White and the Huntsman.

Since Hollywood generally considers its audience as fools, a rotten concoction was brewed up where a pinch of Game of Thrones was drizzled on to the main ingredient of Frozen and blended with Lord of The Rings.

But like too many cooks, inspiration from an assortment of movies totally spoiled the broth that is The Huntsman: Winter’s War

It is both a sequel and a prequel to the first instalment where the ‘white as snow’ princess wasn’t even invited to her own party. Emily Blunt as Freya and Charlize Theron as the Queen
Photo: IMDB

The first third of the movie serves as a prequel to the 2012 movie, filling in the background as to how  Snow White’s stepmom, Queen Revenna (Charlize Theron), in her quest to stay the hottest chick in the kingdom turns her loving caring  sister, Freya (Emily Blunt), into the Ice Queen of the North (Elsa, anyone?).

Staying true to her Frozen roots, a steel blue-grey gown wearing Freya amasses an army of child soldiers to protect her kingdom of the north, which she has declared a no-love zone. Chris Hemsworth as Eric the Huntsman and Jessica Chastain as Sara
Photo: IMDB

Two of her child warriors grow up to be Eric the Huntsman (Chris Hemsworth) and Sara (Jessica Chastain) who dare to fall in love and hope to elope, only to face Freya’s wrath, which inevitably leads to their forceful separation.

About 40 minutes into the film, the events fast forward seven years and we’re into the sequel phase of the narrative. Ravenna is supposedly dead, but her magic mirror is still out there and commands Eric to retrieve it before Freya is able to get her hands on it making her mighty and powerful. The rest of the movie shows Eric’s hunt for the mirror; he is aided by a bunch of dwarves, and a back-from-the-dead Sara. Winter’s War is a diva fest from the get-go. The filmmakers did well enough to hire the talented trio of Charlize Theron, Emily Blunt and Jessica Chastain. But with a plot as idiotic as this, the only reason I can think for the cast agreeing to sign this mess of a movie is because someone told them they would be able to take famed wardrobe designer Colleen Atwood’s costumes home; which is the only good thing worth shouting about this dire spectacle.

When people moan about Hollywood’s proclivity for cheap sequels and shameful franchise cash-ins, this is the kind of movie they mean.