Are Muslim refugees destined for a life of sex slavery? 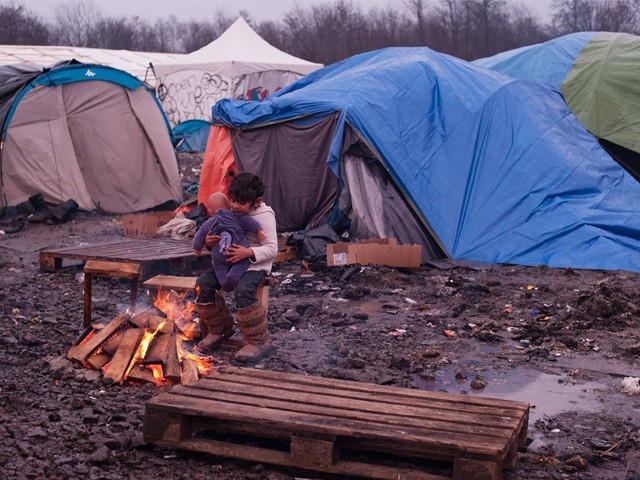 “Listen lady, if you don’t want to be whisked away to a brothel in Brussels and your three girls trafficked into pedophile rings or have their organs removed, please go back to Pakistan. Stop trying to make your way into Europe.”

These were the words of British aid worker Sajad Shah to a Pakistani mother with three very young daughters. The woman was seeking asylum in Germany, along with thousands of Syrians and Iraqi refugees, after claiming she was being persecuted as a Christian in her home country.

The founder of the charity Love for Humanity, Sajad Shah has been helping in the Greek island of Lesbos. It is the first port of call for refugees who have travelled from Turkey and are seeking refuge in Europe.

“I had to warn this woman because thousands of children have gone missing and we had reports of hundreds of young Syrian women being transported to brothels as sex slaves in Europe”. Fun in the sun with children baloons and sweets.
Photo: Shabana Syed

Despite Shah’s warning, the woman along with her young girls disappeared that night without much money in their pocket.

“Where, we don’t know. She couldn’t have gone to Athens as she had not been processed, therefore had no papers. The worry is she and her girls had been enticed or abducted by traffickers.”

Along with the Syrian refugees seeking asylum in Europe were thousands of Pakistanis and Afghanis, all searching for a better life.

It is not a crime to want a better life, because many post-imperialism countries are dependent economies, strangled by the policies of the International Monetary Fund (IMF).

The refugee crisis is not a fast track route to gain citizenship to the west; rather a human tragedy unfolding on European shores as millions escape the wars in Syria, Iraq and Libya. These homeless people trying to join refugees can expect incarceration in Guantanamo style camps and being shot at with rubber bullets.

The bigger tragedy is that instead of providing safety, the refugee camps in Greece and Turkey have become criminal activity hubs where trafficking of sex slaves and organs is rampant.

A report by Europol, European Union’s criminal Intelligence Agency, states that human traffickers are taking advantage of the refugee crisis to find sex and labour slaves, particularly children. They state that over 10,000 minors have gone missing since registering with the authorities and even this is a conservative estimate. According to reports by Sajad Shah and Qari Bilal of Green Gate Trust charity, 114 bodies of Syrian refugees, including children, were found on the shores of Lesbos. When the Muslim aid workers became aware of the fact that these corpses were going to be thrown into a mass pit; they objected. Upon inspection of the bodies during burial rites; various stitches and marks were found, indicating organs had been removed.

Organised criminals are involved in sex and organ trafficking and such activities are big business. According to some reports, there are over 90,000 people waiting for transplants in the US alone.

Two aid workers in Turkey spoke of coming across a hidden camp which was full of young Syrian women. They looked bruised and wore torn clothes. Despite the guards’ objections, aid workers managed to speak to these refugees who pleaded for help, claiming the Turkish police kept them as prisoners who were being raped every day.

It is estimated that within Syria, 6.5 million people are displaced and 4.6 million are refugees. Over 115,000 refugees are in government-run refugee camps in Turkey, 118,000 reside in Lebanon, 116,000 in Jordan and 50,000 in Iraq. It is believed that over 75 per cent of these refugees are women and children, who traffickers are preying upon. A group of traffickers apprehended in the camps was posing as aid workers. Just a few months ago, Turkish police arrested an Israeli man for trafficking organs of refugees from Syria to Europe, where there seems to be a huge waiting list for transplants.

The conditions in the camps are horrendous. Many have become concentration camps to the point that even volunteer aid workers are being pushed out.

Now, the volunteers are being threatened with arrest as authorities are trying to regiment the camps and force the refugees back to Turkey. According to some, the Turkish government does not want the volunteers to bear witness to the dreadful neglect taking place.

When the influx of refugees began last year, it was volunteers from Iceland, France, Italy, Britain and America who had left their cushy lives and travelled to Greece to help. Simultaneously, European governments ignored the tragedy unfolding on their shores and none of the bigger charities got involved. Small charities and hundreds of individual volunteers like Reena Khan travelled through their own means to camps in Greece to help. “I fundraised for aid packs consisting of critical items, food, tents and medicines. With help and support from a local charity, we raised £20,000 and filled two trucks full of aid to be sent to the Island.

A week later, I went to the Greek Island of Samos to set up a soup kitchen where I was the first volunteer. Within a week, I managed to feed 6,000 people cooking from dawn till dusk, using funds from an event that I had coordinated.”

One inventive group of women volunteers called ‘Dirty Girls’ also got involved, taking on the task of exchanging the refugees’ wet clothes for dry ones, and also washed their laundry.

Reena Khan, along with the remaining volunteers, tried their best to make a difference. This was in stark contrast to Western governments which conveniently turned a blind eye towards the plight of the refugees.

“At times it is difficult, at times one’s soul is crushed at what human beings can do to one another. At times I am haunted by the thousands of faces I have seen that I was not able to help; the outstretched child’s hands I had no food left to fill with. At times, I smiled with the smiles that I see and know in my heart that this is the right thing to do. Not the easiest, but absolutely the right thing to do.”

Please sign the petition below to stop human exploitation and also demand an investigation on the thousands of missing refugee children.

The author is a British Muslim journalist and has been a news editor for TV as well as editor of various magazines. She worked in the Middle East and in 2003 was in Iraq right before the war broke out and enjoys writing primarily on issues concerning Muslims and current affairs.

It doesn’t matter if it’s Trump, Clinton or Bernie, we still have to prepare for the worst

The B-side: Junaid Jamshed and untold stories behind the controversies