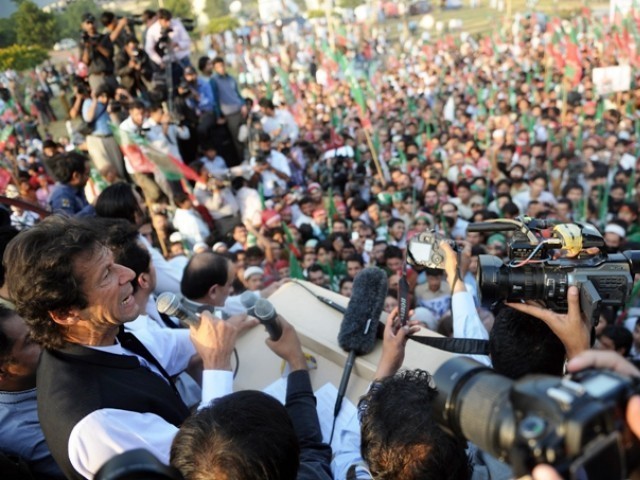 Pakistani politician and chief of Tehreek-e-Insaf (Movement for Justice) party, Imran Khan (L) addresses the crowd during protest rally in Islamabad on October 28, 2011 against the US drone attacks in Pakistani tribal region. PHOTO: AFP

I, being a non-PTI supporter and voter, believe that Imran Khan’s upcoming protest on April 24th will go a long way in making millions of Pakistanis aware of the corrupt individuals governing our country.

Since the Panama revelations, much has been written about our prime minister and his family’s substantial investments abroad. Some have argued that Nawaz Sharif has lost moral authority and should, therefore, make way for new leadership to govern our country.

Others argue that Nawaz’s departure from the political realm would only damage political stability and the future of democracy. I, personally, believe that the questions the Panama Papers have raised may not necessarily implicate Prime Minister Nawaz for cases of corruption, but are enough to warrant accountability from someone who holds a public office.

However, the most surprising aspect amidst what is considered as the biggest leak in history is the public apathy towards corruption and the glaring lack of civil society activism.

Soon after the scandal made headlines and began unfolding, massive protests shook countries across the world. Iceland’s Prime Minister Sigmundur Davíð Gunnlaugsson resigned because of the mounting public outrage and UK Prime Minister David Cameron is still facing backlash from the House of Commons over this issue. However, in Pakistan, there is a lull amongst the public. Other than drawing room discussions, there have hardly been any notable public protests or civil society mobilisation.

This highlights two factors about corruption in Pakistan.

Firstly, the Panama Papers unearthed details of various politicians holding offshore accounts and the knee jerk response from opposition parties in Parliament was anything but outraged or shocked. This reinforced the general stance towards corruption in the country. By conveniently ignoring the mountain of evidence, opposition parties, except the Pakistan Tehreek-e-Insaaf (PTI), have failed to take the opportunity to push for much-needed accountability reforms.

Secondly, the post-panama societal discourse also manifests that, by and large, corruption in Pakistan is only a middle and upper middle class concern. These are only a handful of individuals who are disgusted by the rampant corruption. They have taken social media by storm, calling for accountability and reformation. Whether their cries will be heard is another topic. What is ironic though is that the real victims of corruption, the poor, are completely absent from the scene and have no clue about the on-going situation.

It is for this reason that I, being a non-PTI supporter and voter, believe that Imran Khan’s upcoming protest on April 24 will go a long way in making millions of Pakistanis aware of the corrupt individuals governing our country.

Over the course of time, we have witnessed far too many frivolous street protests which have done more harm than good. But we must understand political movements which rally for anti-corruption will only strengthen our institutions, refine mainstream politics and help set an agenda for wider governance reforms.

Anti-corruption movements are solely waged as a moral crusade in order to evoke public consciousness rather than forwarding political objectives. Unfortunately, our political parties have rarely given precedence to the national interest of the country over individual or party interests.

Given, Imran Khan’s anti-corruption rallies usually translate into anti Pakistan Muslim League-Nawaz (PML-N) rallies, but this is a cause worthy of pursuing, even if it is political in nature.

It’s a known fact that Pakistan politicians are mired in corruption and they are rarely held accountable. Without accountability, the entire edifice on which democracy is built upon will begin to crumble. After all, the ultimate yardstick in a democratic setup is the voter. If Imran Khan can gather enough people to march with him to Raiwind or Islamabad, it may pressurise our prime minister to step aside and nominate an alternative contender from his party.

We have had many governments dissolve on false pretexts of corruption and martial laws being declared; this is probably the first time in Pakistan’s history that someone can set a strong precedent of accountability on the basis of credible evidence available.