Saudi Arabia threatening to pull out assets is economic terrorism 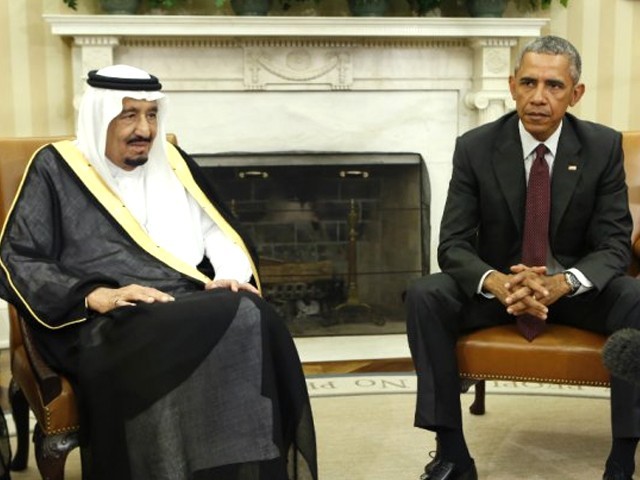 US President Barack Obama speaks with King Salman of Saudi Arabia during their meeting in the Oval Office at the White House. PHOTO: AFP

In the aftermath of the September 11 attacks in New York, it was revealed that 15 of the 19 hijackers were from Saudi Arabia. Yet the country the United States immediately attacked in retaliation was Afghanistan. Later, they followed this up with an invasion of Iraq. It has been nearly 15 years and both wars are still on-going, and are estimated to have cost between $4 and $6 trillion.

While a response from the United States was certainly expected, after the deadliest terrorist attack on American soil – in the country where the event was planned, it is curious that none of the hijackers were Afghan or Iraqi.

Imagine, say, that the hijackers had been Pakistani. Even if the attack had been masterminded in Afghanistan and not Pakistan, would the United States have not responded aggressively?

Yet, something interesting happened after the September 11 attacks. While the victims of the tragedy were still mourning, royal members of Saudi Arabia were quietly ushered out of the United States, some of whom had ‘links to 9/11’, under FBI supervision, on a private chartered plane.

One would think that at the very least, family members of a known terrorist would be questioned by the FBI, but no such thing.

“Two dozen members of Osama bin Laden’s family were urgently evacuated from the United States in the first days following the terrorist attacks on New York and Washington, according to the Saudi ambassador to Washington.

One of bin Laden’s brothers frantically called the Saudi Arabian Embassy in Washington looking for protection, Prince Bandar bin Sultan told The New York Times. The brother was sent to a room in the Watergate Hotel and was told not to open the door.

Most of bin Laden’s relatives were attending high school and college. The young members of the bin Laden family were driven or flown under FBI supervision to a secret place in Texas and then to Washington, The Times reported Sunday.”

This could be explained by the long running ‘special’ relationship the Bush family has with the Saudis monarchy:

“The Bush family has enjoyed a long connection with oil: George Bush bought an oil company in the 1950s and sold it, at a handsome profit, a decade later. His confidante and lifetime collaborator, James Baker, was similarly connected with oil, being a partner in Baker Botts, a big Houston law firm that represented oil-industry interests. When Bush began to put together his presidential team in 1978, it was based on a new political network in Houston, that of Big Oil (his son’s administration has taken this much further, nakedly representing the oil industry like never before). Not surprisingly, this slowly became enmeshed with Saudi interests, which, especially in the figure of Prince Bandar, a member of the royal family and for many years the Saudi ambassador to the US, slowly and painstakingly sought access to the American political elite – most successfully of all with the House of Bush. Prince Bandar, for long the central Saudi figure in the US, hugely rich on his own account, has been a close confidante of George Sr for two decades.”

The friendship continued when George J. took over, of course. But it runs especially deep because the two nations are (now not so) secret war allies:

“The US-Saudi relationship blossomed in the context of two crucial wars, both of which the US fought by proxy: the Iran-Iraq war and the Afghan war. The American administration was deeply concerned about the impact of Ayatollah Khomeini’s Islamic fundamentalist regime in Iran –­ previously the US’s most powerful ally, Israel apart, in the Middle East.

It used Saddam Hussein, in strategy well detailed by Unger, as a means by which to counter the Iranian regime, secretly supplying him, for a decade or more, with weapons and cash. The Saudis – who effectively replaced Iran as America’s regional ally – were intimately involved in the intricacies of American policy, even coming to the aid of the Americans by secretly funding – at the Reagan administration’s request – the Contras in Nicaragua after Congress had blocked presidential support.”

The relationship was tested after September 11 when the Saudis threatened to pull out assets worth billions from the American economy.

Today, the Saudis are playing the same card once again:

“Saudi Arabia has told the Obama administration and members of Congress that it will sell off hundreds of billions of dollars’ worth of American assets held by the kingdom if Congress passes a bill that would allow the Saudi government to be held responsible in American courts for any role in the Sept. 11, 2001, attacks.”

This is economic terrorism, pure and simple. But it should come as a surprise to no one. As Wikileaks cables reveal, Hillary Clinton has expressed weariness about Saudi links to terrorism. It also has been well documented that Saudi money has spread chaos across the world, especially in Pakistan, where let’s be honest, our politicians have sold the country without a second thought.

“The Obama administration has lobbied Congress to block the bill’s passage, according to administration officials and congressional aides from both parties and the Saudi threats have been the subject of intense discussions in recent weeks between lawmakers and officials from the State Department and the Pentagon. The officials have warned senators of diplomatic and economic fallout from the legislation.”

Countries like Afghanistan, Iraq, and other neighbouring nations have paid a heavy debt for the September 11 attacks. The American people, who already suffered loss of life, have lost in trillions worth of taxpayer money.

But when will the Saudis pay? Chances are, never. Not as long as oil is thicker than blood.