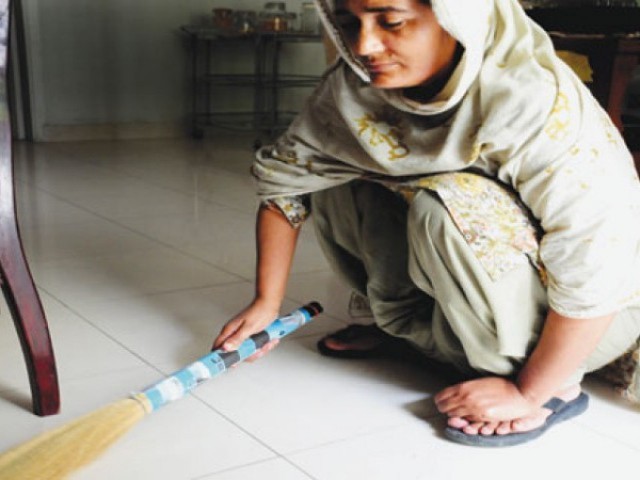 I love what I do for a living. I love flaunting it and I proudly call it a part of my identity. Imagine if a part of your identity was a derogatory term used to cuss, insult or degrade someone? Imagine if the words “you look like a banker/teacher/accountant/marketer” generated feelings of disgust and repulsion.

Back in college, I remember casually exclaiming, “maasi wali haalat hori hai” (I look like a maid) on my way to an exam, since I hadn’t changed my clothes nor brushed my hair.

At the same time of my, rather crude, exclamation, one of the maids in the hostel walked by, busy with her daily chores. She pretended not to notice but I cringed on the inside, almost heard the sound of a heart break. Hers or mine, I am not sure. Here was a nicely dressed lady dedicated to her work, cleaning our rooms, greeting us with smiles every day, ever-ready to help students, and above all earning an honest living.

And there I was; so insensitive, so shallow, so illiterate, despite having studied at one of the best educational institutes in the country. I realised that I had heard and was guilty of using similar phrases on numerous occasions with the intention of to joke or ridicule. This was never done out of disgust for the domestic help, but because I seem to have internalised the expression as normal and didn’t realise how hurtful my words came across. Like ‘surf’ is synonymous to detergent, maasi (maid) and bhangi (sewerage cleaners) are considered substitutes for filthy and disgusting. But the only difference between the two is that one is marketing at its best, and the other is our mentality at its worst.

Since that day in the hostel hallway, any efforts made to condemn such ‘jokes’ have been disregarded or shrugged off with another ‘joke’.

Why have occupations like jamadars (sweepers), bhangis, maasis and chaprasis (peons/ junior office workers) earned so much derogation? Why is a legitimate job, one that does not violate any moral or ethical values, considered so disdainful? How ironic is it that those who are creating the mess are looking down upon on those who are cleaning up after them?

I see no shame in working a full time job so I can feed my family and send my children to school.  Why then should jamadars, bhangis, maasis and chaprasis feel any different? Why should they have to feel ashamed? Anyone earning an honest living deserves to be proud of what they do – not live with their identity being used as an expletive. No hardworking, honest individual should be belittled for what they do.

Perhaps this is the way it has always been, but then again perhaps this is the time for things to change. The use of these words have been internalised to such an extent that we fail to see the effect it generates in people. What this amounts to is a false sense of pride and ego, which we neither deserve, nor have the right to extract by treating others as if they are beneath us.

This incident was my moral awakening. I hope reading this will become yours too.

At the end of the day, there is credibility in kindness not credentials.

The author aspires to add value to life and believes in using PR to steer education, empowerment and equality. She tweets as @mariyadada