Do you qualify? The imperialistic exclusivity of the Karachi Grammar School 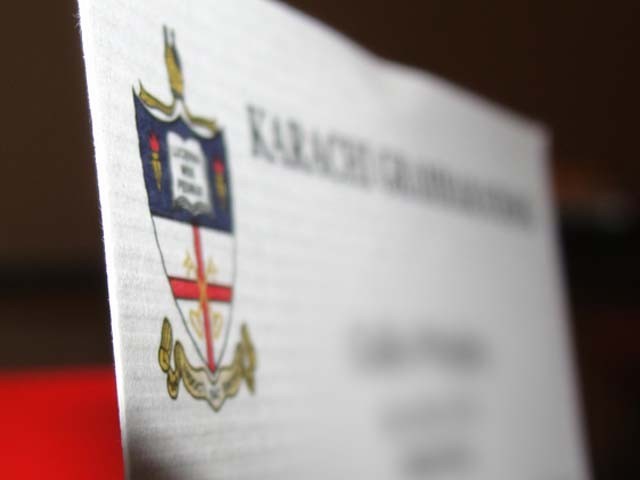 People nod impressively if you tell them you went to KGS, and in a city obsessed with class and nepotism, the doors of KGS mean opportunity and exclusivity. PHOTO: 4mdesigners.com

Like many Karachiites who get very good results in their ‘O’ levels, I decided that my grades were my ticket to the prestigious Karachi Grammar School (KGS). KGS, you see, practises a vague semblance of meritocracy (and maintains its college admission rate records) by allowing a handful of high-achievers into their hallowed gates at the A-level stage. People nod impressively if you tell them you went to KGS, and in a city obsessed with class and nepotism, the doors of KGS mean opportunity and exclusivity. In short, the school represented to me an elusive and exclusive glamour that I wanted to experience, first hand.

I spent most of my childhood and teenage years in a middle-class school in Karachi; my friends were children of businessmen and dentists, but also drivers and office clerks. My best friend worked in a shop on weekends and the vast majority of us had not been outside Pakistan. It wasn’t a great school – some of the teachers were lax and the discipline severe – but I had a firm group of friends with whom I grew up, sharing the usual secrets and fantasies, angst and concerns.

I read constantly, and liked to write stories. I had a special bond with my English teacher and a safe, supportive home environment. Maybe that all contributed to why everyone was proud but nobody particularly surprised that I did well at school.

Somewhat surprisingly, my parents didn’t love the idea of my going to KGS. Or at least my mother didn’t. She thought I would become spoiled and start speaking in that distinctive American-twanged Grammarian accent and that my academic talents would perish. She felt, very strongly, that I should follow my older siblings into a good A-level institution that didn’t reek of elitism and ostentation.

But I fought back tooth and nail until she gave in. She flipped, as many good parents do when they realise that their children’s minds are made up, from fervent opposition to unconditional support and accompanied me when I went to hand in the application form.

Any ‘New G’ (someone who starts at KGS at A-level stage) knows that the OG (old Grammarian)/New G divide is a vast abyss. ‘You’re not the same,’ the OG’s inform you pretty much from day one, in those overt words and also in deed. The New G’s, mired in shame at this rejection, try desperately to fit in. The girls’ uniforms get tighter and shorter until they look like their OG peers’. Accents change subtly and anyone going on a trip abroad is desperately propositioned to bring schoolbags, sweaters and shoes from London or New York.

I was not immune, not even a little bit. I quickly abandoned my old friends, the middle-class, unfashionable girls that I had grown up with. I cautioned my parents to speak in English whenever my new ‘friends’ were around. I scrutinised my whole life differently – why did my mother not wear glamorous clothes and jewellery like my class-mates’ mums? Why did we not have expensive paintings in our house? And why didn’t we ‘holiday’ in Spain or Italy like other people did? I grew shameful of things I had no need to be shameful of, and prided in other things that were pure form over substance. I suppose you could say I lost myself, a little bit.

I remember a school fellow saying to us jokingly on day one,

‘You must be so excited to be here. People bow down, you know, when you tell them you go to KGS.’

It seemed to me a toxic way to conceive of yourself as a child and also, an unwarm welcome that asserts hierarchy. On some level, I had it easier than others – my light skin and slim body conformed to the standards of beauty at my new school, which followed an imperialist, white supremacist aesthetic so strongly that I’m sure, if a time-traveller were to land inside the high-walled campus one day, it wouldn’t take much to convince them that they were still in colonial times.

Value was based, without a doubt, on proximity to westernisation. If you were fair skinned (ideally, with a white or non-desi parent), you were automatically more desirable. An accent that signified frequent visits abroad added further value. The lighter the hair, the less dark the eyes, the more attractive you were considered. Speaking Urdu well was undesirable – this was a language reserved for speaking to servants in. The teachers spoke in clipped anglicised accents and made clear that the epitome of progress would be if one went on to Harvard or Yale, Oxford or Cambridge.

Urdu was taught only as a second language and the admissions process, with the exception of the A-level loophole, involved requests for proof that parents or siblings went there in the past. There were headboys and headgirls, and school houses called things like Napier and Papworth, named after the colonial masters who founded the school – KGS, established in the mid 1800s, was the first school in the city for ‘non-natives’.

It could be argued that the Karachi Grammar School has much to be proud of – its alumni include renowned political figures, Oscar-winning film-makers and some very good journalists. The fact that these people had access to resources (including each other) that made their position possible in the first place probably has more to do with their success than the school’s actual influence, but, like most elite institutions, this access to networks and resources is a large part of where the school’s appeal lies.

KGS went through massive changes in its pre-colonial days including name changes from ‘The Anglo-Indian School’ in 1847 to ‘The Kurrachee European and Indo-European School’ in 1854 to the Karachi Grammar School in 1879. It has remained more or less in this state since, moving from serving the children of European colonisers to their neo-colonial inheritors, retaining the strict class barriers and ridiculously anachronistic and elitist traditions, producing achievements celebrated by Western establishment figures and local elite alike.

However, room for difference or radicalism, innovation and activism, is left closed. Any generosity stems from ego, patronisation and pity, not real empathy or compassion. The output of this school may have polish and confidence, but it is also somewhat cookie-cutter, establishment, conservative, and out-of-touch. The bubble of KGS can stretch only so wide – many of its alumni end up marrying each other, sending their children to KGS, and finding solace in an ethos that is fervently anti-‘fundo’ and pro-capitalist, one that involves lavish parties and frequent travel – this is the KGS ethos to dealing with the chaos that is Karachi. And perhaps there is also great profundity or happiness inside this bubble. The truth is, I wouldn’t know for sure.

But I feel that a massive decolonisation is needed within those gated campuses, one that questions the cliquish imperialist assumptions on which its foundation stands. And more importantly still, a decolonisation must take place within us that allows us to see those imperialistic standards for what they are and that allows us to question the worth of this over-esteemed institution.

Do I wish I had never gone to that school? Saved myself two years of snobbery and condescension, and feelings of low self-worth that can be very harmful when you’re in your teens? That I’d seen my mother as a source of wisdom, not antagonism and old-fashionedness and listened to her more carefully? Not really.

That struggle probably helped me develop the critical skills that allow me to see the world in the way I do now. Still, I believe that snobbery and elitism and the enforcement of strict class difference create wounds that run so deep that we can barely look at them. And that’s why we must.

There was no question of solidarity amongst the New G’s. On the contrary, we tried our hardest to distance ourselves from each other, as this increased the chances of being absorbed into the OG networks. But this also left people on the side-lines, isolated and confused. To acknowledge that the problem was to do with class or background was almost more embarrassing than just believing that there was something in your character that didn’t quite fit. To be confronted with hostility or exclusion, whatever the reason, is always painful. But it is also usually unwarranted. And it is strengthening.

The author is a reviewer and a writer of short stories, essays, and plays.