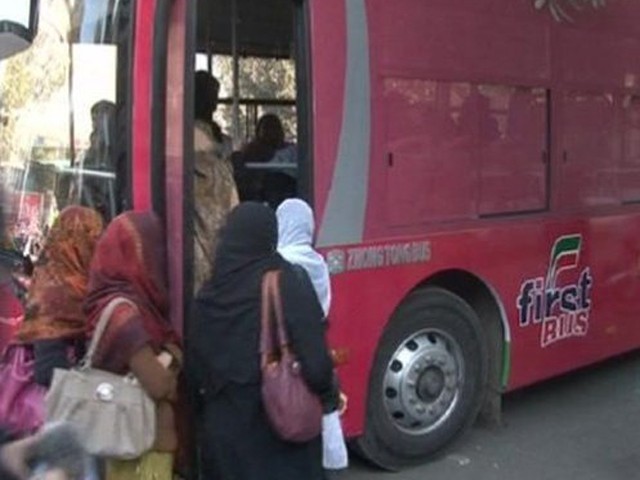 Standing alone in a bus makes you feel like a lone ranger. A lone ranger surrounded by Hannibal’s brutal army. It frightens you to the core and you want the crowd to disperse as soon as possible.

As a daily commuter, I’m used to travelling in packed buses in Karachi. On one of these days, I was waiting for a passenger to get off so I could take their seat. But unfortunately, I missed the opportunity of grabbing the seat as two other female passengers, tall and broad in built, were standing on either side of the seats, ready to sit down. It seemed as if both women were well acquainted with each other since they were constantly engaged in conversation.

As the bus slowly emptied, one of these women moved out of her seat and grabbed an empty seat near the bus driver.

The other woman, still sitting on the seat was being unnecessarily nice to me. She offered to ease my load by taking my books and the newspaper I was carrying off of me. I pounced at her offer. Generous offers such as this are rarely made. I felt a weight lift off my shoulders as I handed her a few of my belongings. I could finally grab onto some support without dropping my things.

Eventually, she inched so close, I began to feel suffocated. I politely asked her to step back as I felt uncomfortable. She smirked and nonchalantly stated that she was only holding on to the pole for support and couldn’t really change her position. I felt my personal space was being invaded so I took a few steps back myself.

I was not prepared for what happened next.

The woman, who had smiled at me a few seconds ago, had now placed her shroud on my bag and was discreetly using two of her fingers in an effort to take my Samsung tab out.

I was absolutely shocked but afraid at the same time. But how could such a nice helpful woman steal from me? What is more surprising is that this happened in broad daylight.

I angrily asked her what she was doing. Just as I gathered the courage to challenge them and tell them off, the bus came to an immediate stop and the two women scurried off.

After their hasty departure, the other female passengers began asking what happened, unaware of the two female pickpockets amongst them. Much to my surprise, I realised that the bus driver and conductor were privy to their mischievous intentions because they stopped the bus as soon as I raised my voice.

This incident is glaring evidence of the on-going organised crimes, in which women play a pivotal role.

A relative of mine, also a drug addict, told me that women are being used in the supply chain of drugs by mafias operating in the slums of Karachi.

Every day, some women end up becoming dealers, some replace pimps in prostitution, while others are used to tip off dacoit gang members. It is alarming to say the least. What’s more, in our society, the image of women usually generated is one of innocence as they are usually seen as the harmless sex. Therefore, criminals have used this to their advantage and have started recruiting women in their notorious activities.

Luckily, the police are cracking down on these criminal groups and are making arrests. But that is not enough, we need to be more vigilant of the people who surround us; whether they are men or women.

The author has a Masters in Mass Communication from Jinnah University for Women's and is currently working at Manhal Education School as an assistant administrator.