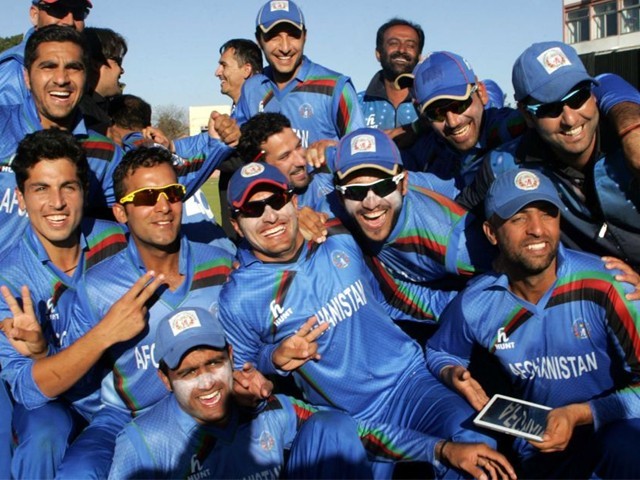 Relentless prayers back home finally went answered in 2014 as Afghanistan took on the big names in the Asia Cup.

Let me tell you a bit about these men. The cricket bat is a two-year-olds’ play-toy once it meets their thick palms, and the ball once bludgeoned, stays bludgeoned. Even in defeats to big sides during recent world cups, such as South Africa in the 209 Wankhede game, they’ve succeeded in making powerful statements. Braving into cricket’s entertainment limelight from the war-torn turf of their native land, the team’s scintillating rise in cricket goes beyond just technical flaws and inexperience, to a developing world of enthusiasm, flair and competitiveness. Former cricketer Taj Malik was the torchbearer to Afghanistan’s cricketing future. From the refugee-laden camp of Kacha Garri, he singlehandedly invented the Afghanistan Cricket Club, a revolutionary transformation for a generation of migrants, in infinite need for training, infrastructure and funds. In 1995, his nerve earned him Taliban’s approval for a cricket federation to be in place, whilst making friends in Peshawar for domestic training opportunities. The result of such spirit, sweat and toil was Afghanistan’s affiliate membership status in 2001, which made it a unique force ever since.

One of the key factors separating Afghanistan from its associate counterparts is how rapidly and comprehensively it has monopolised associate-cricket competition. Skipper Asghar Stanikzai and Samiullah Shenwari – a dependable duo, notorious for their collective swinging, bashing, slamming and damage control took part in Afghanistan’s first ever ODI appearances in 2009 against Scotland and Netherlands. By 2013, the young outfit had played 25 associate fixtures, including Ireland, UAE, Nepal and Kenya. It won 16 games in total, while remaining unbeaten in both 2011 and 2013. Associate competition soon became a thing of the past.

Relentless prayers back home finally went answered in 2014 as Afghanistan took on the big names in the Asia Cup. Red-hot Zadrans gave Pakistani batsmen a serious scare in the opening game, reducing them to 117/6, before Umar Akmal managed to salvage some pride. A cyclone of all-round brilliance struck Bangladesh in the next encounter, helping Afghanistan register its first ever victory against a full-member nation. The 32-run historic win was backed by Asghar Stanikzai’s insane back-foot inside-out drives, along with Mohammad Nabi’s off-spin guile. It took Bangladesh a whopping 13 years to register its first ever ODI win against a full-member nation; it took Afghanistan just under four.

In the months that followed, the rise of individual stars helped Afghanistan acquire an entertaining and ferocious profile, critical for success in the global arena. Mohammad Shahzad’s agile foot movements afford him to play an array of different scoop shots at one point in time, whilst getting on one knee to smack something through the covers, in the very next instance. Of course he lacks the technique and temperament of an accomplished opener, but the effectiveness of his stroke play helped capture the eighth best T20 batsman spot. That was courtesy of a 67 ball 118 against Zimbabwe in UAE – the highest score ever by an Associate player. Since 2015 – a magical year for the celebrated likes of Virat Kohli and Martin Guptill – Shahzad has been the leading run scorer with 704 runs in 24 innings. The messy method to his belligerent batting speaks wonders on behalf of the whole unit, loud and clear.

Growing exposure is slowly, but surely, making amends in Afghanistan’s underdeveloped tactical play. Unpredictability, on the other hand, continues to play its “upset” role against key opponents. Their annihilation of Zimbabwe, not once, but twice in bilateral T20 and ODI contests, served as a brilliant example of all-round superiority. This was a Zimbabwean side which just gunned down 303 against the formidable Kiwis, gave Pakistan a close 2-1 ODI series finish, and tied a T20 series to Bangladesh in their own den.

The 2016 World Cup may have gone wrong for many sides, but Afghanistan had their moments, including the most definitive finish any side could ask for. They crushed Zimbabwe, and had world-cup finalists England reeling at 63/7, despite having nailed down 236 a few nights ago. Plenty of heads also turned when registering 172 against the Rabada-Tahir combo. But on top of everything else, the young Afghans hammered 40 runs in the last five overs against the almighty West Indies, who eventually went on to lift the World Cup. How is that for some assertion? The victory was not just a mere stroke of luck – it was a demonstration of quality spin from Mohammad Nabi and Rashid Khan, some excellent fielding, and brilliant character during middle-innings partnership building. Therefore, as Afghanistan combines its innate aggression with newfound calculation – owing to Inzamamul Haq’s leadership – it is starting to overcome its technical flaws to fill the shoes of an exciting new outfit.

These lads pay homage to the sport by celebrating in flying colours, and in a generation of inventive gameplay, retain their undivided love and dedication for cricket. Its watching sides like these flourish that defines one’s true passion and craze for the game.

Virat Kohli versus Steven Smith, is the comparison even justified?