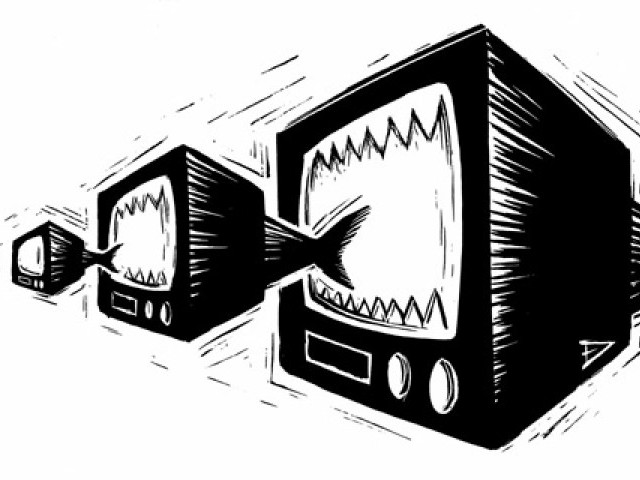 The media rehashes similar rhetoric on human interest stories - but is there ever really a point?

The other day, one of the major TV news channels was doing a story on the two brothers, Mughees and Muneeb who were beaten to death by a frenzied mob in Buttar village, Sialkot.

The program did short interviews with residents of Hajipura, where the boys were from, and with their families. This is probably old news and will not “shock” or “sell” but it was encouraging and depressing in the same breath.

It was encouraging because television channels do not usually follow-up on their stories. Something horrible happens, someone does something inhuman, there is a hue and cry, “analysts” and faux-experts deride the decadence of Pakistani society while laying the blame on whoever seems to fit their ideological bias.

That great aural artist of our times, Lupe Fiasco, hits the nail on the head with Streets on Fire

The poor say the rich have the cure
The rich say the poor are the source
Revolutionaries say it’s psychological war
Invented by the press
Just to have something to report
Some say the first case came from a maternity ward
Some say a morgue, some say the skies, some say the floor
Whores say the nuns, nuns say the whores
And everybody is sure

Nonetheless, this program followed up on the tragedy on which no substantial progress seems to have been made. The DPO was indicted, along with a few others but nothing has come of it. Mughees and Muneeb’s mother also featured in the program, if only for a few minutes. The way in which her controlled grief and recollections of times spent with her sons was not just heart-rending, it was something much more than that.

It personified, to me at least, the collective failure of all of us as human beings and our continual failure to be civilised homosapiens. Usually, I can be as cynical as the best amongst us, but this time I failed – abysmally. This is not just about Mughees and Muneeb, come to think of it, it is about Bilal too, the 13-year-old who died that day in Buttar. They all had mothers, sisters, brothers, friends, fathers and teachers who adored them and whose lives have been torn apart by their absences.

Let us be honest, the Chief Justice of Pakistan does not have a magic wand, and he is, after all, human. Nevertheless, the revolution of justice promised in those heady days of 2007 and 2008, during the pitched battles with authorities in Lahore, during the days where it was “one unarmed man” – the Chief Justice – against the might of the omnipotent General Musharraf.

It has become a typical Pakistani story, of much promise and style but little substance. It is depressing to watch the family of the Sialkot brothers having to relive their own personal nightmare, it is disheartening to watch the relatives of the unfortunate passengers from the AirBlue crash being told nothing about the investigation into the death of their loved ones, and it sure as hell is depressing to hear the umpteenth story of a 5 year old being raped or being married off to the highest bidder.

Finally, the most overarching irony of all, we live in ‘Pakistan’, land of the pure, filled to the brim with the impure, unjust and us, the unsure.