Be your own Maalik, be Pakistan’s Maalik 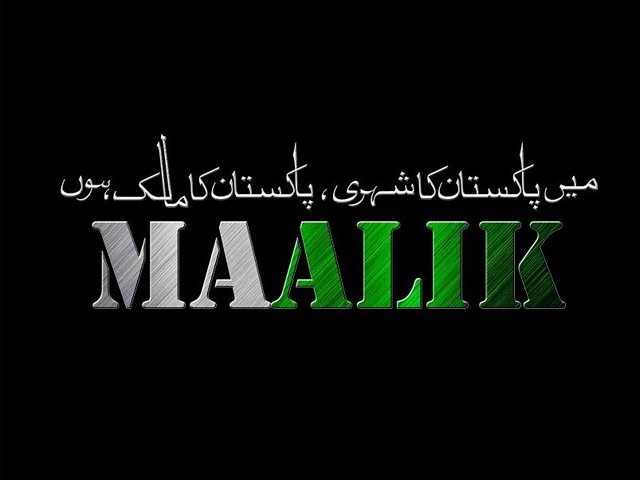 Maalik is a tale of every citizen in one way or the other. PHOTO: MAALIK FACEBOOK PAGE

Ashir Azeem, who has many accolades to his name, be it director, actor or writer, was given the label of a patriotic entertainer after his popular drama serial, Dhuwan. His directorial debut movie, Maalik, has been amongst the most anticipated movies in Pakistani cinema due to the popularity of his previous drama.

Maalik is a tale that every citizen can identify with in one way or another. It has various stories within the entire plot. The main story line revolves around an SSG officer, Major Amjad (Ashir Azeem) who starts a private security company after having faced a major tragedy in his life. What may have seemed like a simple job of serving his nation, turns out to become more complicated than just following orders from the higher ups.

Another story within movie highlights an on-going grudge between a feudal lord and a righteous school master, Master Mohsin (Mohammed Ehteshamuddin). Lastly, another story in the movie emphasises a family fleeing from a Soviet war torn Afghanistan and settling down in Karachi.

There comes a point in the movie, when these three stories entwine as one and that’s what makes Maalik an engaging tale of love, patriotism, power, revenge and feudalism.

Performance wise, Ashir Azeem’s acting is calculated and accurate – he delivers exactly what the character requires. Hassan Niazi, playing the chief minister, gave a stellar performance, while Adnan Shah Tipu, the CM’s sidekick, came off as an exceedingly entertaining character – was played very well too. He managed to add a tinge of light humour to an otherwise serious movie. Sajid Hassan and Mohammed Ehteshamuddin are great in their respective roles as well.

Putting aside all praise, I’m still confused as to why Farhan Ali Agha, playing the role of Major Haider, starred in the movie considering there was absolutely nothing significant I could see in his role.

Performances aside, the music of this movie is definitely worth a mention. The title track by Saahir Ali Bagga and Man Mora by Rahat Fateh Ali Khan were my favourites. But that does not mean the remaining songs were not great either. Naina Roye by Massoma Anwar came in third on my list of favourites.

The cinematography of Maalik is beautifully executed; it is so brilliant that it keeps viewers captivated throughout the movie. Shot in interior Sindh and parts of Balochistan, the scenery is exotic and provides a fitting background to the movie. I want to give a special mention to the action scenes, which were intense and extremely realistic. Ashir Azeem, has without a doubt, confirmed that he is a talented director and actor, and can sail through any rough tide with extreme capability.

I felt the only flaw in the movie was that it wasn’t edited as well as it could have been. Some scenes could have been cut out, plus the ending was too abrupt, leaving many aspects of the movie unclear. I am pretty sure most of the audience will be left wanting answers.

Overall, Maalik is a decent attempt and has raised the bar for Pakistani cinema. It’s a movie that sends out a strong message. Watch Maalik and take ownership, since that’s what the movie is all about.