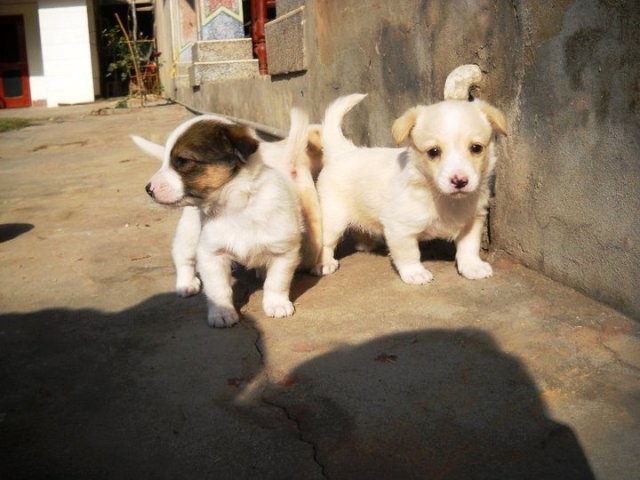 I had to put his little face into the bowl so he could lap up milk. PHOTO: AMNA MELA

Last year, I came across a girl whom I despised at first sight.

Some girls have a legitimate phobia of animals but some make a big deal about being afraid, thinking it’s endearing to be the damsel-in-distress. I was afraid when I was five and didn’t know any better, but when I see grown women screaming at the sight of a tiny animal, I can’t help but think they look ridiculous.

Initially, that’s all I thought this was, a stupid girl scared of a pint-sized puppy. When it ambled up to her, she kicked it, hard. The poor thing was knocked onto his back and had to struggle to get back up before walking away.

I had left milk for it that morning. It was too young to be wandering around on its own, too naïve to be scared of the students that stumbled by.
The girl, wearing a lab coat and a hijaab, walked towards it and gave it a swift kick in its stomach. This time the puppy was yelping pitifully as he flew in the air and rolled over multiple times after landing. The girl was laughing, clearly pleased with herself.

I wanted to walk over and lunge at her to give her bruises she could remember me by. The adrenaline flowing through my veins did the talking for me. I managed to refrain from profanities and told her what a depraved cretin she was. I was so enraged that I don’t even remember the girl’s face, just that she kept smiling. People applauded as I left but I wish they had done something instead to wipe the smirk off her face.

How I wish I could remember her face! I want to track her down to tell her the ending, maybe give her a backhanded slap or two to see how she handles someone her own size.

Afterwards, I called my father, who brought a box which we took the puppy home in. It had a slight limp but we were hoping for a recovery. In spite of the way it had been so cruelly treated, it was still a happy baby; still trusting, still playful.

We took it to the vet for medication, but the next day the limp spread to the other leg. He began to drag himself around by his forelegs, the most miserable sight I’ve ever seen. His paralysis crept up his spine, slow and tortuous, making us feel helpless.  Towards the end, he couldn’t lift his neck to drink water in June’s unforgiving heat. I had to put his little face into the bowl so he could lap up milk, which he did hungrily. He wasn’t able to move out of his own feces and relied on us to hose him off, and to move him out of the sun. He survived only a few days. If we had known the misery he would go through, we might have asked the vet to euthanise him.

A few months later I heard of a very wealthy and respected feudal lord who punishes villagers who let their animals wander into his land and eat his crops. His workers kill the animal, no matter how large and costly, and send them the meat. Since baby donkey meat is not halal, in this case the workers were ordered to throw it into a rapidly flowing river. Each time the donkey crawled out, he laughed and had his workers throw it back in until it finally drowned.

I wonder what makes us the kind of people who care for animals or the people who abuse them. I’ve come to the conclusion that it has nothing to do with the school one attends, wealth, social status, or outward piety.

For the one nasty girl in my college, there are many others who take pity on stray kittens and leave them milk.

“Education comes from within; you get it by struggle and effort and thought.”

Among villagers who are hardly educated, there are those who treat animals with care and respect.

Cruelty to animals isn’t caused by nationality either. If it were, no country would have the need for organisations to monitor for such crimes.
The urge to torture animals is sometimes innate. According to the New York Times:

“the FBI has found that a history of cruelty to animals is one of the traits that regularly appears in its computer records of serial rapists and murderers”.

“It has also been found that children who are cruel to animals have often witnessed or been victims of abuse themselves.”

Thus, it is true that you can judge a society by the treatment of its animals.

Some people falsely preach culture as religion when trying to convince others to have contempt for certain animals, especially dogs. They couldn‘t be more ignorant.

“As the Muslims’ army marched towards Mecca to conquer it, they passed a female dog with her little puppies. The Prophet Muhammad (PBUH) not only commanded that the soldiers should not disturb her, but he posted a man to see that this was done.”

Sometimes the people who make the most effort to look outwardly  pious (or to look like doctors by wearing lab coats) forget that there is no such thing as Islam without compassion, or medicine without empathy. Hence the coining of the word ‘hypocrite’.