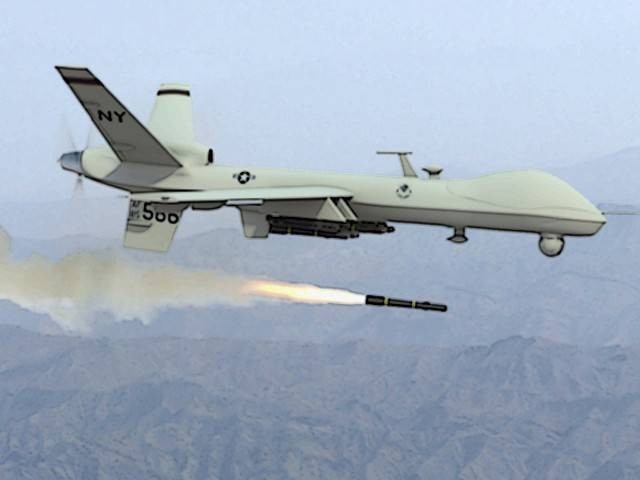 So, in the world that we live in today, the US executive has the right to kill anyone, anywhere on Earth. PHOTO: AFP

The US President, Barack Obama, acknowledged on Friday that civilians should not have been killed in drone strikes. He went on to say that the US administration is now cautious on striking where women or children are present.

It took President Obama close to eight years to acknowledge this fact.

Drones might be the third most annoying thing in the sky after mosquitoes and plastic bags caught in the breeze. Despite being a nuisance, the US president loves them. According to the Bureau of Investigative Journalism, not only has he launched more than eight times the drone strikes his predecessor did, Obama likes joking about them too.

Drone strikes are a very serious business. A strike on a training camp of the militant Islamic State (IS) group in western Libya killed more than 40 people in February; a drone strike in Somalia against al Shabab on March 5th killed 150 people.

This may not be news to anyone. But the popularity of drones amongst the US administration and public alike is news.  Surveys carried out by Gallup, Pew Research Centre and the US News consistently reveal that Americans approve the use of drone strikes overseas.

It is easy to see why drone strikes are so popular. They cost less than manned planes, and they kill a lot of terrorists; except we do not know if they actually kill terrorists.

The catch is, nobody really knows how many get killed in drone strikes, including the CIA. The data sheets covering casualty loss due to drone strikes all use estimates. That is right, estimates. And these estimates can vary greatly.

Consider Pakistan, for example. Estimates range from 10 civilian casualties to 1,200. The gap is so astonishing that it might be factually incorrect to term it as a margin for error.

Furthermore, the US drone policy has no rules. In other words, the rules have been made so obscure that they might as well not have them.

Eric Holder, former US Attorney General said that the US uses drone strikes only when there is ‘an imminent threat’ to US national security, which is pretty clear, until you dig a little deeper.

NBC quoted a Justice Department memo, which claimed that,

“An imminent threat does not require the US to have clear evidence that a specific attack on US persons and interests will take place in the immediate future.”

The word ‘imminent’ implies immediate future; otherwise it would not be imminent.

It turns out that imminent is not the only word with a surprisingly fluid interpretation when it comes to drone strikes. The definition of civilian casualties has also been open to interpretation. The CIA counts able bodied, military aged males as militants, unless there is concrete and indisputable evidence suggesting otherwise.

By this logic, every middle aged man living in Karachi is a member of Strings – the band.

Astonishingly, the CIA has been getting away with using such absurd logic for a very long time. Consider the very first drone strike in Afghanistan in 2002, for example. As mentioned by the Stanford Law journal in 2012, the drone strike killed three men, one of whom was assumed to be Osama Bin Laden.

Why, you may ask?

Because of his height.

Reports later confirmed that it was an elderly man collecting scrap metal.

The world has been playing with such absurdities.

But understand this; drones are probably the most lethal weapons of our time. They make absolutely no noise, are virtually invisible to the human eye and they are almost as fast as a small aircraft and have the capability to launch missiles.

However, here is what makes them the most dangerous weapon – it is used more often than you think. It has been used 423 times in Pakistan, 134 times in Yemen, 300 times in Afghanistan and 23 times in Somalia.

So, in the world that we live in today, the US executive has the right to kill anyone, anywhere on Earth, at any time, for secret reasons, based on secret evidence, based on a secret process, undertaken by unidentified officials.

But nobody will actively fight it because the US is powerful and Pakistan, Afghanistan, Somalia and Yemen are not. This admission by President Obama will go nowhere, because of power.

It is all about power. Welcome to the game of drones.