The air we breathe 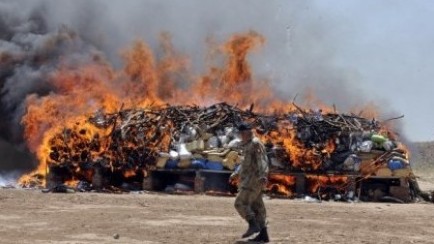 A Huge pile of seized drugs burning during a ceremony by Anti Narcotics Force in Rawalpindi. PHOTO: AFP

On June 27, this paper ran a story on International Drugs Day that reported that Pakistan has one of the highest rates of narcotics seizure in the world. The news made me very happy, especially since the last top ten that Pakistan made to was for “failed” states.

But what caught my eye was the photograph printed with the story: that of a drug burning ceremony held in Rawalpindi under the watchful eye of the police. According to the article, Pakistan has seized narcotics worth more than 50 million rupees this year and all of that (or at least most of it is safe to assume keeping in mind the corruption quotient) was burnt into a cloud of thick, black smoke that arbitrarily has subtracted from narcotic use in Pakistan but has definitely added to air pollution.

Air pollutants, according to the Pakistan Environmental Protection Act 1997, means any substance that pollutes the air by unfavourably altering its chemical, physical, biological, and aesthetic properties and makes it unclean or detrimental to health and safety of humans. Among other things, this includes smoke, fumes, dust particles and odour.

Air pollution is a rapidly growing environmental problem in Pakistan. According to the Pakistan Environmental Protection Agency, air pollution levels for the larger Pakistani cities – Karachi, Lahore and Islamabad – have been recorded seven times higher than those prescribed by the World Health Organisation.

While we show our commitment to combating drug abuse, emitting it into our environment every year only pushes us towards even worse air to breathe. I appreciate all the 2,400 people who make up our Anti-Narcotics Force for doing their bit, but there has to be a better way to do it. A way that supports sustainable development. Yes, I would want our future generations to be free from drug abuse, but I have an equal desire that they have good air to breathe and that policemen oversee tree plantation with the same zeal that they supervise drug burning.