It is better to arrive late than dead 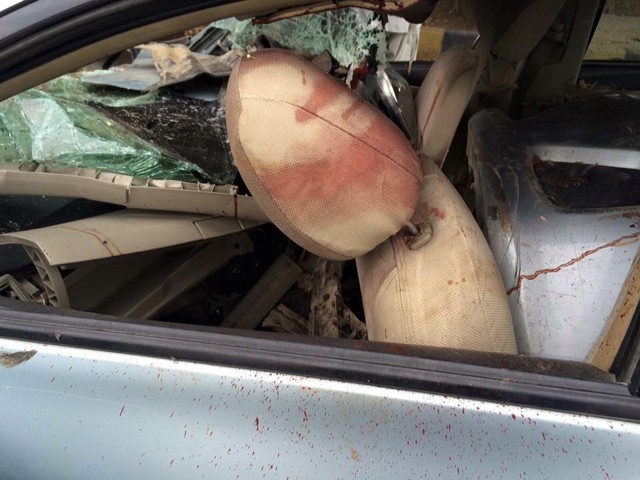 Alarmingly, the accidents are only growing more devastating and more frequent. Not too long ago I saw a car smash into a motorcyclist, resulting in carnage best not described. PHOTO: SCREENSHOT FACEBOOK PAGE HALAAT UPDATES

It was over a year ago when a terrible tragedy befell a good family.

While driving home at night, close to their house in DHA Phase 4 on main Khayaban-e-Badar in Karachi, a middle aged couple was blind sighted by a speeding vehicle. The fierce impact of metal gnashing on metal lasted several seconds, dragging their car sideways for what felt like an eternity.

Both occupants were left hurt. The husband, a tall and kind-hearted man, usually armed with a ready smile that I automatically recall when I think of him today, suffered a head injury. Here, he performed one last act of heroism. Seeing his wife dazed, he used all of his remaining strength to drive her to the safety of their home. Upon arrival, as if he had been waiting to complete this final deed, he lost consciousness.

Their assailant was the exact opposite of this man.

Their assailant was a coward.

Rather than check to see if the occupants of the car were in need of aid, the assailant drove off. Perhaps if the assailant had not fled, a life could have been saved.

If this person is reading right now, then they should know that the husband did not survive the car crash. After battling for weeks at a hospital, he moved on from this world, leaving behind those who loved him.

Unfortunately, anyone who drives in Karachi, especially in DHA, knows how the streets turn into carmageddon at night. Motorists break every traffic law in the book, putting not only their lives at risk, but the lives of others. On any given evening, any innocent person in a car in Karachi can die horribly, be it adult or child.

Usually, the culprits are young men racing through the streets in their family’s new cars, or VIP SUVs with tinted windows that crush anything in their paths, or simply intoxicated people.

If these irresponsible drivers were only putting their lives at risk, I wouldn’t be writing this blog, but in their wake many blameless are either left hurt or crippled for life. Let’s also not forget the families of both the culprits and the victims, who often pay a lifetime’s bounty in grief.

Alarmingly, the accidents are only growing more devastating and more frequent. Not too long ago I saw a car smash into a motorcyclist, resulting in carnage best not described.

Evidence of the regularity of these accidents can be found on the Facebook page ‘Halaat Updates’, where a terrifying accident is reported every other post. Here are some pictures I’d like to share, not for shock value, but to drive home the value of driving carefully. Remember, it is better to arrive late than dead:

Not surprisingly, the authorities haven’t been moved by these horrible crashes. At the very least the government should run awareness campaigns across television and newspapers to educate drivers. At the same time, our police needs to be more vigilant. Then again, what can we expect from an organisation that hands out driving licenses to anyone with a few thousand rupees in their pocket?

Drive safe. For yourself. For your family. For those around you.

All photos are screenshots from Halaat Updates Facebook page.