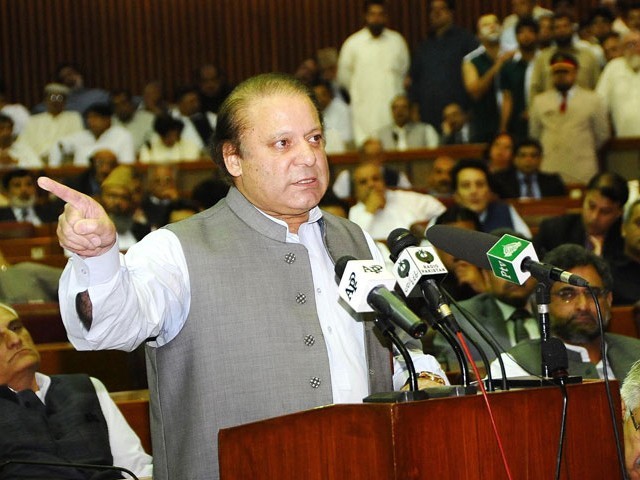 The words of PM Nawaz Sharif’s address to the nation this week were not ground-breaking. PHOTO: AFP

“Let Nawaz Sharif know that this war has now come to the threshold of his home. The winners of this war will, God willing, be the righteous Mujahideen.”

In turn, the PM appeared on live television with a comeback to remind these terrorists,

“…that we are keeping count of every drop of blood of our martyrs (and) this account is being settled, and we will not rest till it is paid.”

Within hours, reports poured in of the launch of an offensive and the overnight raid and arrest of over 300 suspected militants.

The Easter Day massacre was not Jamaatul Ahrar’s first bloody visit to Punjab. And, it likely won’t be its last.

The Sunni militant organisation – a faction of the Pakistani Taliban (Tehreek-e-Taliban), which has previously thrown support behind the globally deplored Islamic State – has six terror attacks to its name.

Three of these terror attacks took place in Punjab.

The group first surfaced in Punjab in 2014 with the Wagah Border suicide attack leaving 55 dead. The following year the militant group edged into the populous and lively heart of Pakistan, Lahore, with same-day bombings of two churches, leaving 15 dead.

Every time, the PM promised to avenge his people. Each time the state and military’s top brass engaged in its dull, repetitive political grandstanding – by now, a familiar (and frankly forgettable) by-product of terrorist attacks in Pakistan.

The words of PM Nawaz Sharif’s address to the nation this week were not ground-breaking. We have heard reformulations of these hollow and vague declarations before to the point where one wonders whether prime ministerial speechwriters are getting paid to pull up old speeches and simply change the location and number of casualties.

Equally lacking surprise is the army’s quick launch in to overdrive. To round up 300 suspects overnight is a fairly underwhelming feat considering that if we knew exactly where to find these alleged terrorists, to the point where we had their addresses this whole time, what exactly has been our hold up?

Call us a demanding nation, but going after the big bad guys on our behalf simply doesn’t feel as good as not having to die because of your inaction in the first place. Really, there’s no point in jumping the shark and promising to avenge us down to the last drop of blood after the blood of a fresh bout of your victims has already gone cold.

Truth is, the PM, the government, the army, and the disaffected, disillusioned Pakistani public who forget to be angry after a few days of social media activism, are all very willing, wily, and complicit entities responsible for the death of our country’s most vulnerable.

When the governmental hype dies down, the media cycle turns and the emotional Facebook statuses become buried under life’s mundane, nonessential news, the 140 children of Peshawar dead riddled with countless bullets, the 15 peaceful churchgoers attending Sunday Service, the 60 tourists attending the Wagah Border ceremony, and, the 72 children and women celebrating a national holiday at a public park this week, will still be dead.

What the Pakistani Taliban wants is clear: an Islamist nation governed by its perversely psychotic interpretation of Shariah.

But what Pakistan wants is not clear.

Despite the PM’s earlier invocation to leave Punjab alone, the enemy is now at our gates. In fact, it has been for a long time.

And, if the past few years are any indication, then cooperation between both parties is both futile and unlikely. The two are not likely to agree on where to go to lunch let alone engage in productive peace talks.

To live idly and contend with futility will surely mean more death. To launch into battle head-on would lead to the abundance of new wrongs that comes with full-out war. And to grin and bear the comfort with which terrorism thrives in our country will only make Pakistan an even bigger international pariah than she currently is.

Flimsier and more vague words could not have been spoken. Terrorism is stupid but terrorists are not.

Slogans and promises do not make a depraved, ideologically deranged enemy retreat.

Until the government’s priorities shift, the empty pronouncements of our leader against terrorists and their many terrors will not suffice to change the warped course the nation is currently stalled on.

It’s time the PM stop’s talking the talk and starts walking the walk.