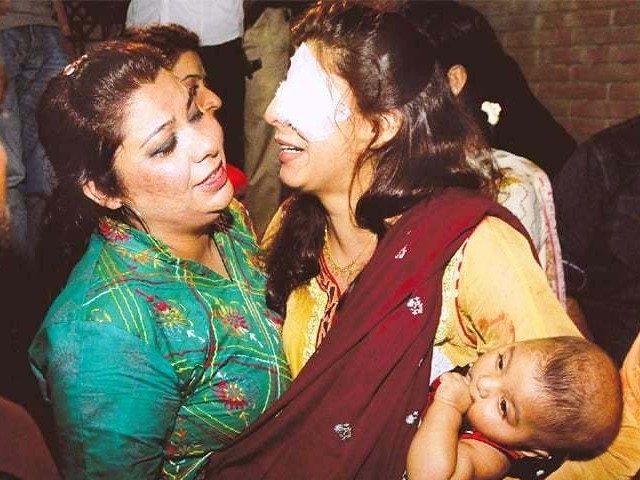 A family member tried to comfort and injured woman at the hospital after the suicide attack. PHOTO: AFP

Back in December 2014, Taliban terrorists attacked a school in Peshawar, Pakistan, killing 151 people, most of them students. It was the deadliest attack in Pakistan’s terrorism-tortured history, and prompted some Pakistanis to describe it as their 9/11.

National leaders, meanwhile, described the massacre as a turning point in the nation’s approach to terrorism. They vowed to crack down more robustly against all terrorists in Pakistan— not just those, like the Pakistani Taliban (TTP), that strike in Pakistan, but also those like the Haqqani Network that strike only in neighbouring countries.

To an extent, Pakistan did indeed intensify its campaign against terrorism. It ramped up military operations against the Pakistani Taliban and its allies in the North Waziristan tribal region and established a “National Action Plan” to tackle terrorism and extremism across the country.

And yet there’s no clear evidence that Pakistan has discarded its selective approach to militant groups. The Haqqani Network and anti-India groups like Lashkar-e-Taiba and Jaish-e-Mohammed are alive and well, and their leaders largely live free.

Fast forward to this past weekend. Pakistan was rocked by another mass casualty attack, this time in a packed public park in Lahore, in Punjab province. At least 72 people, many of them women and children enjoying Easter, were killed. Once again, a Pakistani Taliban faction claimed responsibility.

Significantly, this attack – unlike the Peshawar school massacre and most other mass casualty bombings in Pakistan in recent years – took place in the stronghold of Pakistan’s ruling party, the Pakistan Muslim League-Nawaz (PML-N). Lahore has suffered terror attacks in recent years, including a 2010 assault on a Sufi shrine that killed more than 40. But they’ve been relatively rare, and never as deadly.

Sunday’s tragedy, with its high death toll and wanton targeting, was meant to make the Pakistani government feel vulnerable in a big way.

“We want to send this message to Prime Minister Nawaz Sharif that we have entered Lahore,” taunted a Taliban spokesman. “He can do what he wants but he won’t be able to stop us.”

But will the monstrous nature of the Lahore massacre do what the Peshawar one could not? Will it provoke a more muscular Pakistani approach to counter-terrorism – one that no longer distinguishes between “good” militants that don’t target Pakistan, many of which are based in Punjab and harbour relationships with the state, and “bad” ones that do?

It’s too early to tell. Encouragingly, Pakistani security forces suggested they would launch a “widespread operation” to target militants across Punjab.

However, fundamental realities about Pakistan’s strategic calculus offer reasons to be sceptical that we’re experiencing a turning point.

Jamaat-ul-Ahrar, a faction of the TTP, is believed to have perpetrated the park assault. It is led by a commander named Omar Khorasani, believed to have sheltered al Qaeda leader Ayman al-Zawahiri and who has threatened to seize Pakistan’s nuclear weapons. His atrocities include reportedly having 23 Pakistani soldiers beheaded.

Khorasani and his militant outfit clearly pose a terrifying threat to the state, and so once again it looks like the “bad” militants have struck Pakistan, while the “good” militants have not. The trouble with this thinking is that the Lahore terror attack will likely vindicate its on-going limited war against terrorism – a war that targets only the terrorists that stage attacks in Pakistan, particularly against the state.

This limited counter-terrorism policy amounts to playing Russian roulette. All Pakistan-based terror groups, whether they launch attacks in Pakistan or not, are cut from the same extremist ideological cloth. Unsurprisingly, many “good” militant leaders end up switching to the “bad” militants’ side – including Mast Gul, who defected from a Kashmir militant group to the Pakistani Taliban in 2014.

So, why the double standard?

Ultimately, for Pakistan, it’s all about India. Terror groups such as Lashkar-e-Taiba and Jaish-e-Mohammad, both based in Punjab, along with outfits like the Haqqani network, are useful to the Pakistani security establishment because their violent activities either target India directly or seek to limit its presence in Afghanistan. Up to now, their strategic utility has outweighed the dangers they inherently pose to Pakistan’s stability.

So long as Pakistan perceives or projects India as a core threat, it’s unlikely to turn on its strategic assets. They’re regarded as useful proxies that help neutralise the India threat – one that Pakistan frequently flags. Indeed, just days ago, Islamabad claimed to have arrested an Indian spy in the province of Balochistan, where Pakistan has long accused India of helping separatist insurgents (New Delhi has denied the arrested man was a spy).

Meanwhile, the Lahore blast has shaken a nation that has suffered from senseless terrorist violence for far too long.

Has it finally served as a wake-up call for a state that has pursued a dangerously limited counter-terrorism policy?

Don’t count on it.

Sadly, many more innocents – including children such as those killed on Sunday – could pay the ultimate price.