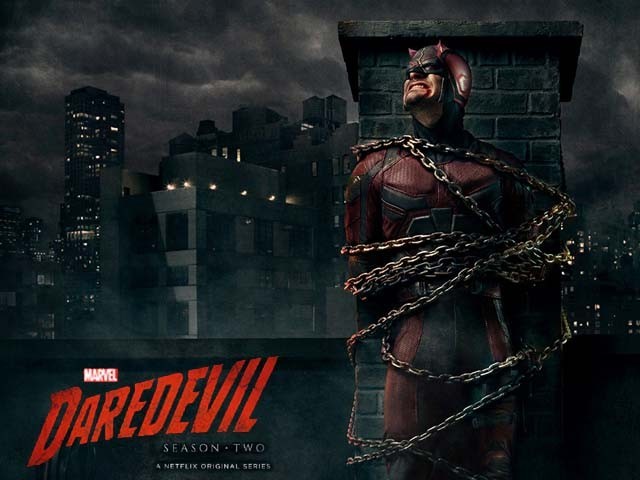 Daredevil season two is one hell of a ride and you sure don’t want to miss this one.

Many superheroes will cross paths this year on the big screen. Batman V Superman is already in theaters and Captain America: Civil War will be out soon, but the one face-off that should be talked about is the one between The Punisher and the Devil of Hell’s Kitchen. Marvel’s Daredevil season two has finally arrived and the Netflix series is what every superhero/comic book geek fantasizes about. Charlie Cox reprises his role as Matt Murdock, aka the Daredevil. Deborah Ann Woll, Elden Henson, Rosario Dawson and Vincent D’Onofrio also return from the previous season. The new additions to the already fantastic cast are Jon Bernthal (The Walking Dead, Fury) who plays Frank Castle, The Punisher, and Elodie Yung as Elektra. The new cast members do an incredible job, especially Bernthal who fits right in the Punisher’s shoes and easily beats all the previous incarnations of the character on the silver screen. After putting Wilson Fisk behind bars in the first season, Matt Murdock comes across Frank Castle (The Punisher) this season. Castle is on a killing spree making every criminal of Hell’s Kitchen a potential target. Murdock also reunites with his old girlfriend, Elektra, who is in town for her own personal agenda. While his law associates, Foggy and Karen, dig deep to unravel the mystery surrounding Frank Castle, Murdock continues to get in the way of The Punisher’s brutal justice as he is the masked guardian of the city. The show has successfully avoided the second season dip that most TV shows witness and has come back even stronger. The plot keeps you thinking and makes sure you are fully invested in it. The acting of the cast is topnotch. Charlie Cox portrays the titular character brilliantly and makes it impossible to imagine someone else in Daredevil’s costume. We should be thankful to Elodie Yung for helping us forget the image of Jennifer Garner holding a pair of Sais in her shiny red costume. The Punisher has finally gotten the adaption he deserved and Jon Bernthal makes sure the audience roots for him even if he’s not the most likable character when he’s seen brutally blowing people’s heads off. Daredevil season two is a slight improvement over its predecessor. Where Wilson Fisk was an evil mastermind, The Punisher is a deadly assassin who will stop at nothing to make sure he gets his vengeance. To avoid giving away too many details, I will only mention that The Hand also makes an appearance in this season. Just saying. Daredevil is one hell of a ride and you sure don’t want to miss this one. From the incredibly exhilarating action scenes to the jaw dropping stunts, everything about this TV show will most definitely make you fall in love with it in 13 episodes or less and I guarantee that, by the end of it, you will eagerly await the season three premier.