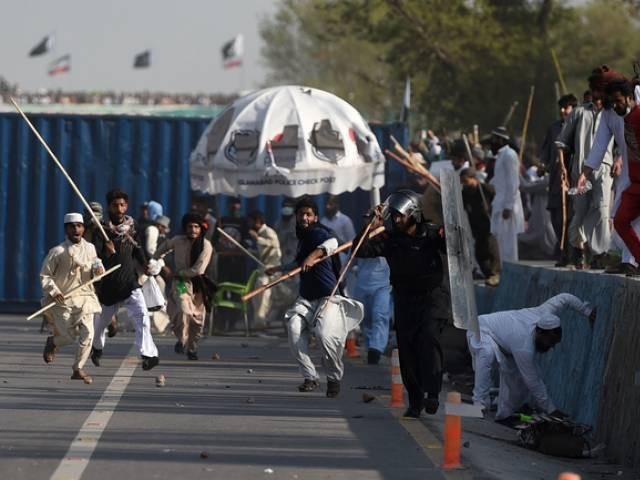 This is not about a man who committed the premeditated murder of a man he had sworn to protect. PHOTO: AFP

The last megalomaniac, who stood outside parliament in an attempt to take down the government, showed he still has a shred of compassion for his countrymen when he gave up his campaign in the face of a horrible terrorist attack committed by a religion-inspired group of sadists.

On Sunday, hours after the same group of sadists murdered more of our brethren, like-minded people descended on Islamabad.

But unlike their politician predecessor, these people have shown they are not here for blood. Their charter of demands literally calls for killing people. And between the lines, it calls for purging innocent people who disagree with their desire to retreat to the good old days when lynching, slavery, child marriages and wife beating were still in vogue.

That they chose to ‘mourn’ a murderer, nay a traitor, by destroying public property when they could have mourned the innocents killed in Lahore speaks volumes for their motives.

This is not about a man who committed the premeditated murder of a man he had sworn to protect. This is about regime change. They want to dice up the already-tattered social fabric of this country.

Much as Ibn Saud signed a Faustian deal to take over the Hejaz and found his kingdom, these goons, followers of a corrupt clergy financed largely from the kingdom, want to impose their bloodthirsty interpretation of a religion.

Conversely, on Saturday, as part of an Easter ritual, the Pope washed the feet of refugees – Muslims, Hindus and Copts among them – many fleeing from Wahabbi/Salafi terrorism, and said,

“We are all children of the same God.”

To explain, the leader of the Catholic Church just stressed that whatever name one refers to a deity or deities by, is of less significance than our shared humanity. Religious leaders don’t do that.

Oh wait, the Dalai Lama, when asked about terrorist acts committed by Muslims, has repeatedly defended Islam as a whole and specifically cited the lack of separation between politics and religion, describing it as,

“… a situation which creates violence because emotion is involved.”

And the same is the case with most religious figures with sizeable followings.

Now listen to the language at D-Chowk and remember that some of these people are the heads of schools of thought for millions of people. Foul language, false accusations and outright slander (sometimes relating to the chastity of people’s female relatives).

To my understanding, a good Muslim should provide an example for others. If the people using such language think they are worthy of teaching anyone anything about being good Muslims, I shudder to think what their students will be saying and doing.

Incidentally, many of these men seem to have tremendous paunches, which would go against the teaching that gluttony is a sin, unless a disproportionate number of people with thyroid issues end up becoming mullahs.

As for the flimsy arguments presented amid the violence, I can only say that anyone who brings a gun to a war of words has lost the war.

If there is any strong evidence in your belief or argument, present it. Don’t accuse someone of blasphemy if they tear up your argument by presenting one with facts and don’t accuse them of incest. And if you can’t, stop to think why that is so. Why wouldn’t you have the words or the evidence to defend something you claim to believe so strongly in?

But then, the people on the streets do not believe in logical reasoning. They don’t care whether or not Salman Taseer or Asia bibi committed blasphemy or whether it was their accusers and executioners who should be tried for levelling false accusations.

All they want is power and as history shows, the rise of authoritarian rulers is based on nonsensical propaganda that hits at people’s fears. In this case, that in a country that is over 90 per cent Muslim, Islam is under threat.

So what is the solution?

Thomas Paine wrote in the Age of Reason that one good schoolmaster is of more use than a hundred priests. In the context of Pakistan, I would correct him. Keeping in mind that priests such as Maududi opposed Pakistan and the only education that most madrassas, including the ones run by politician-priests is jihadi ideology and no functional literacy, I would opine that one schoolmaster is worth a million priests.

We don’t need state funded Hajj and mosques when the heads of these religious groups travel in fleets of luxury vehicles purchased with tax exempt cash.

We need state-funded quality education. We don’t need every Pakistani to only rote-learn the Quran and little else by the time they reach adulthood. We need them to be fluent in math, sciences, and the arts, especially philosophy, which teaches one to think beyond literal interpretations and look for deeper meaning and understanding.

Daesh is already knocking at our doors. The men at D-Chowk are their ideological brothers. As Daesh would kill Yazidis, Christians and non-Salafi Muslims, they have freely expressed their desire to kill Ahmadis and anyone who would ‘hurt their feelings’. To give these people another inch would be akin to inviting in Daesh.

I strongly doubt that the booze-swigging, cigar-smoking, dog-loving, suit-wearing founder of this country wanted a constitution under which he would be ineligible to hold high office and under which many of his trusted party members would be ineligible to hold high political offices, or possibly be deprived of their right to life. But then, history was rewritten to suit a certain narrative and the result is visible on the streets of this country.

Secularism is not a war on religion. It means religious freedom – equality for citizens regardless of belief. Religious states, however, elevate certain citizens over all others. This also creates infighting within religions, because one school of thought will have more power than others, with terrorism and violence being the end results.

Look at the only other country which claims a divine right to exist – Israel. Look at the lives of Muslims in the occupied territories, which these clergymen regularly rant about. Both are terrorised by right wingers who want to punish them for simply being born in a home with the wrong holy book.

One may argue that Palestinians are also the victims of state terror, but then, the Palestinians fight back. Imagine what Pakistani police would do to slum dwellers if they used rockets on them. By the way, in both, the liberal egalitarian minorities are demonised by the right wing simply for caring about the plight of the less fortunate, regardless of religion.

Fascists, utilising support from the illiterate and the literalists, will keep manipulating democratic tools to try and create an authoritarian state unless they are put in their place.

Make an example of the protesters. Lay out their options – back to their mosques, or off to jail cells or graves. Just make sure they cannot return to the political sphere.