He named her Angel 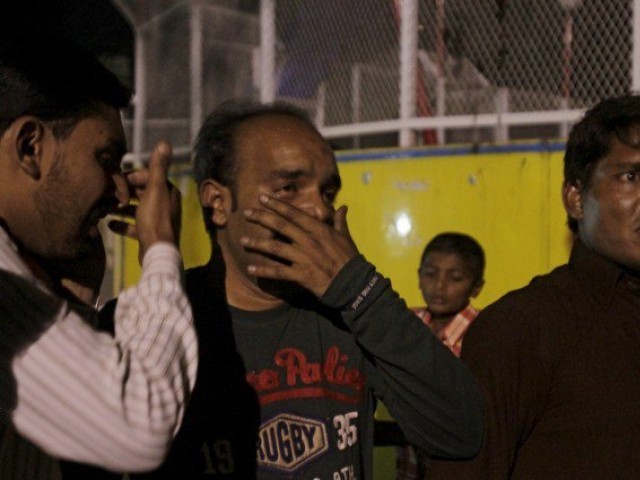 Men mourn the death of their relatives after a blast outside a public park in Lahore, March 27, 2016. PHOTO: REUTERS

I named her Angel and she looked the part too. After four rowdy boys, my wife and I had prayed for a girl. I was blessed, fathering four sons or at least that is what everyone told me. However, the Easter of 2011 brought with it the true tidings of joy and blessings for me, when my Angel was born.

I have recorded every moment, every toothless smile, every shaky step and all first mumbles from her beautiful mouth. I have watched her sleep, memorising the details of her innocent face and I have stayed up with my wife dealing with every diaper change. Not many fathers can boast having cleaned spit up, but I do. I have done it all.

Which is why, I refuse to believe that this is her.

I will clear up your confusion.

I stand here in Gulshan Iqbal Park. I rushed here from home as soon as I heard about the explosion. I was woken by my frantic mother to inform me that my wife and her brother had taken all the kids to the park, two hours ago. It was their ritual for Easter Sunday. It was routine.

Every year, I accompanied them, mostly because Angel urged me to go. This year though, exhausted from night before at church, I had stayed back to get some shut eye. “Papa hum jarhay hain” (father we are going), she had waved from the door in her melodious voice. Her smiling face was the last thing I saw before I fell asleep.

And now I stand here.

This is the story of every father stumbling over dead limbs in the Gulshan Iqbal Park.

There are countless fathers, mothers and children, stumbling all around the park looking for their estranged loved ones. It is with a mixture of dread and anticipation that they look upon the faces of the dead bodies scattered around them. If they find someone that they recognise, it is hell for the family and if they don’t, the heart-wrenching quest continues.

Is there a way out of this vicious cycle?

It starts and ends with innocent people dying, burning and screaming. It is followed by families mourning loved ones for years which is followed by the government agencies condemning the attack. It will be accompanied with the army and security agencies cracking down on the dens of these terrorists which miraculously appear out of the blue.

So quickly after the attacks are these hideouts discovered, they might as well have been hiding in plain sight all this time. Then there are hurried press conferences ending in headlines about how we will root out this evil.

After a few days, a patriotic and zealous song is released with lyrics laced with encouragement and resilience in face of such horrific violence. Does any of it work? Of course not!

Here we are consoling, crying and condemning, all over again. How many Angels are we going to lose until we finally realise that dubbing the victims as martyrs will not prevent these attacks? When will the horror end? Or will it end up acclimatising us with it?

Sadly, it already has. With short intervals of peace in between, we will keep witnessing such horror. With the current incapacitated situation of our government, it has about as much a chance of curbing this violence in future, as Angel’s father has of finding her safe and sound.